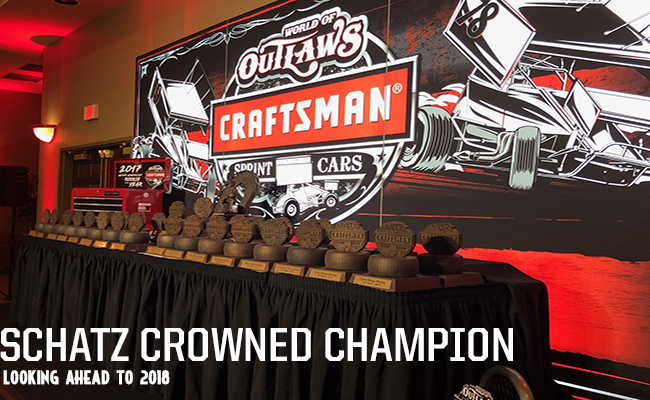 Gravel, 25, capped off a career season with a thrilling victory in the Season Finale at The Dirt Track at Charlotte. The win doubled his and CJB Motorsports’ win total from last season and left them even hungrier heading into the offseason. “It’s been a lot of fun. I’m glad I was able to give Barry Jackson a career year. He deserves it; he is the heart and soul of this team. We are very excited for next year,” Gravel said.

Despite Gravel scoring 12 more wins than Brad Sweet, the latter took the runner-up position in the point standings. If Gravel wants to challenge Schatz for a Series Title next season, he will need to find more consistency on a nightly basis.

Then again, Sweet’s always the bridesmaid, never the bride model was unprecedented. In comparison to his five wins, the Grass Valley, California native scored 14 runner-up finishes and 18 additional third-place finishes this year. While that is nothing to hang your head over, being so close to victory that many times has to leave a bittersweet feeling heading into the 2018 campaign. “It’s always easy to look at the negatives, but we had a ton of positives this year. It took a lot of teamwork to stand up here. It’s not easy to be second in points. We’ll keep trying and will be better next year,”  Sweet said at the Banquet.

As for Schatz, what else can be said. 2017 saw the Fargo, North Dakota native score his tenth career 5-Hour ENERGY Knoxville Nationals title as well as becoming the first driver to score back-to-back Kings Royal victories. Those two wins alone garnered Schatz $200,000 in winnings. “It’s been a hell of a ride. See you all next year,” Schatz said amidst a handful of jokes and stories at the Banquet.

While Schatz is without a doubt the man to beat, it wasn’t always that way. At age 25 (Gravel’s age now), Schatz scored just two wins in World of Outlaws Craftsman Sprint Car Series competition and finished seventh in the point standings. It wasn’t until 2006, at age 29, when Schatz scored his first career Championship Title.

Having said that, all the pieces are in place for the Watertown, Connecticut native to challenge Schatz. Gravel and CJB Motorsports are bringing back the entire crew next year and will be poised to prevent Schatz from scoring his tenth Championship.

Sheldon Haudenschild was awarded the Kevin Gobrecht Rookie of the Year as both he and fellow rookie contender Brent Marks vastly improved throughout the season. Haudenschild leaned on the experience of veteran crew chief Bonzai Bruns and his father Jac for guidance on new tracks. Meanwhile, Marks had only one full-time crew guy all year, and neither of them had seen any tracks west of Knoxville. Expect both young guns to be ready to go in 2018.

Looking ahead to next season, the World of Outlaws Craftsman Sprint Car Series appears to be stronger than ever in what will be the Series’ 40th Anniversary of existence. With all the big names returning and a cast of new drivers expected, here are a few things to look for in 2018.

Don’t be shocked if:

Believe it or not: