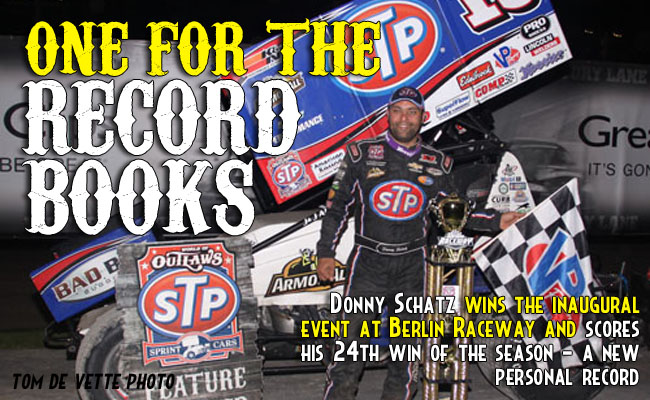 Wins the inaugural event at the track and scores his 24th win of the season, the most of any single season in his career

Schatz, who swept both Michigan races this season (I-96 Speedway on May 31 and Berlin Raceway on Sept. 27), came into Berlin following a win the night before at Bloomington (Ind.) Speedway where he tied his single season win record at 23.

The five-time champion put together a dominant performance throughout the night at Berlin, scoring quick time early and battling from sixth to second in the dash.

The track, a paved 7/16 mile oval that has been covered with dirt, provided the Tony Stewart Racing driver with a racing surface that he is historically good on.

“We’ve always been good in the slick,” Schatz said. “We haven’t raced anything that slick in a long time – I’ve been looking forward to it. Just an awesome racecar – it was fun to drive, fun to get through traffic. It just did everything right tonight.”

Schatz started the night on the outside front row next to 19-year-old Christopher Bell who he battled with for his win the night before. Bell held off the STP / Armor All car for the first lap as Schatz fought side-by-side with the young driver. On lap two, the battle continued into turn four where Schatz got around Bell and took over the lead. He never looked back.

Schatz’s strongest competition of the night came from Daryn Pittman. The driver of the Great Clips car started the feature in fifth and quickly made headway through the field. He and Gary Taylor traded positions through the opening laps with Pittman taking over the third spot for good on lap five. Just two laps later he overtook Bell for the second spot.

As the feature wound down, the Kasey Kahne Racing driver closed the gap on Schatz but was not able to catch him as the two worked their way through lapped traffic.

“I had a good car,” Pittman said. “We got to second and could hang with Donny there for a while and then a couple of lapped cars held me up and he checked out. But then he got held up there the last few laps pretty hard off of four. We at least got somewhat close.”

Pittman said it is hard to know what to expect at a new racetrack but said it was fun racing all night. He said the track challenged his crew to make the right decisions and keep them competitive.

“It’s hard to be happy with second, but sometimes that’s the way it goes.”

Pittman’s Kasey Kahne Racing teammate Brad Sweet brought his SurePoint Medical / SureTestSupplies.com car home in third place. Sweet fell back to third on the start but battled back past Taylor and Bell to take over the third spot on lap 15.

“Donny’s been on a roll lately so hats off to him for making it tough on everybody,” Sweet said. “They’re definitely setting the bar really high right now so we’re happy to be up on the podium.”

“I’ll be honest, when I first showed up here I wasn’t sure what to expect with just laying some dirt over the pavement and it being slick and dusty right out of the gate. It was a good racetrack all night. There was two grooves and you had to work on your car to get it right and I think it showed. There were cars out there that missed it a little bit and were going backwards and there were cars that were good that were going forward. We were lucky enough to be one of the ones going pretty far forward.”

Schatz extended his championship points lead over Pittman to 288. Paul McMahan remains in third while Kerry Madsen now has a 24 point lead over Joey Saldana for fourth place.

Jason Sides was the KSE Hard Charger of the night after advancing seven positions to finish in 11th.

The World of Outlaws STP Sprint Car Series returns to Williams Grove Speedway for the final time this season to take on the Pennsylvania Posse at the National Open on Oct. 3 and 4. The Outlaws then join NAPA Super Dirt Week XLIII at Rolling Wheels Raceway on Oct. 11.

BERLIN RACEWAY NOTES: Donny Schatz picked up his eighth quick time of the season tonight after a turning a lap of 15.616…Donny Schatz win at the inaugural World of Outlaws STP Sprint Car Series event at Berlin Raceway gave him the 24th win of his career – a single season record for the five-time champion… Steve Kinser, Ryan Ruhl and Christopher Bell all won their heat races tonight… Jason Sides received the KSE Hard Charger Award after advancing seven positions to finish in 11th.