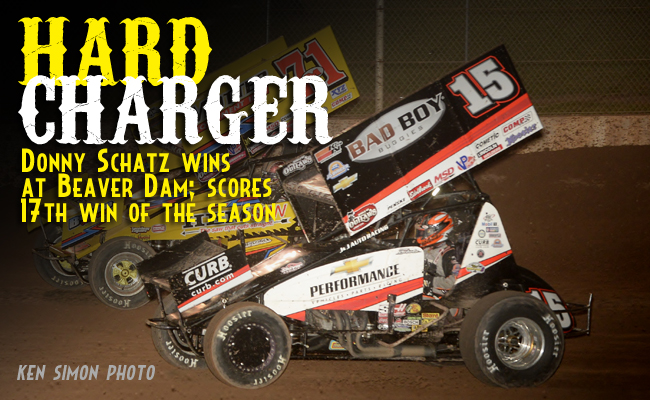 The reigning World of Outlaws Sprint Car Series champion battled through traffic from a 10th place starting position and around leader Daryn Pittman late in the race to score his 17th win of the season and the night’s KSE Racing Hard Charger Award.

“This race team, you don’t count them out,” Schatz said of his No. 15 Bad Boy Buggies team. “It doesn’t matter if we start 10th or 20th. They’ve got their game face on, they’re really motivated right now, they’re really on top of things. The more people mess with them, the more they work hard so that obviously showed tonight.”

When the green flag fell on the 40-lap feature, Kerry Madsen led Shane Stewart, Daryn Pittman and Joey Saldana. Stewart quickly battled to the lead as the scrum behind him began. Pittman and Madsen traded positions through the opening laps with Pittman taking over second then losing it again on lap 10. By lap 12, Madsen drove past Stewart for the lead as the two drivers exited turn four.

As traffic came in to play, the front of the field bunched up. Stewart and then Pittman both made runs at the lead, at times getting side-by-side with Madsen, but neither one was able to close the deal until lap 26 when Pittman drag raced Madsen down the front stretch and beat him as they came off of turn two. He took over the lead on lap 27.

Schatz, meanwhile, had moved from 10th to sixth by lap nine. He stayed between there and fifth for the majority of the feature. Then, on lap 30, Schatz began his assault on the leaders, picking up fourth on lap 28, then third on lap 30. As Pittman worked his way through traffic, Schatz found his opportunity.

Pittman went to low side in turns three and four, Schatz went to the high side. Both found lapped cars in front of them, but Pittman got stuck as Schatz used the middle to get around the one blocking his line.

“He trapped himself there,” Schatz said of Pittman. “There were guys on the bottom and he was having trouble getting by them and you just kind of had to go all over.”

Joey Saldana, who hovered around the fourth position all night, worked his way around Stewart for third, using traffic as a pick.

The only caution of the night flew with four laps remaining. When the race returned to green Schatz built up a healthy lead as Pittman tried to run him down. Saldana had his hands full holding off Stewart. Ultimately though it was Schatz standing in victory lane – the first time since 2002 he has won at Beaver Dam.

“(My crew chief Ricky Warner) asked me at the start if I wanted to be married to the top or the bottom and I said, I need to go everywhere and they did a phenomenal job getting the racecar to do that,” Schatz said. “It could float through the middle a little bit if I caught it just right and I could hammer the cushion if I had to or even slow down and hit the bottom. Lap traffic is fun, it’s what helped us win the race. It’s the only way we probably would have started 10th tonight and won.”

Schatz extended his lead in the championship battle to 210 over second place Shane Stewart. Schatz and his Tony Stewart/Curb-Agajanian Racing team have won six of the last ten Outlaws races.

Pittman, the 2013 World of Outlaws Sprint Car Series champion, said the track has historically been good for his No. 9 Great Clips team.

“I honestly consider this my second best place next to New Egypt as far as my performance,” Pittman said. “We had a good run and we had a good car. Traffic just killed me… I just made a couple of mistakes. Man, that was a lot of fun. It was a fun race, hats off to this whole Great Clips team because we had a good car all night.”

Saldana, who took home the quick time award of the night, his eighth of the season and the most of any driver in 2015, said traffic was the key for the night, especially when battling Schatz.

“Donny seems to figure out lap traffic better than anybody or he knows where to put his car in the right spot at the right time,” Saldana said. “You just have to learn from that and try to get better. We had a great car all night. The whole Motter team worked hard. We’ve been a solid car, we’ve just had a ton of bad luck. Just finishing tonight and knowing we can go to the next race and have some momentum on our side is huge.”

The World of Outlaws Sprint Car Series return to action Wednesday night at Lakeside Speedway for the O’Reilly Auto Parts presents the Outlaws at Lakeside, a makeup of the previously rain postponed event on June 6. For more information on the event and to learn how to purchase tickets, visit http://woosprint.com/lakeside-speedway.

RACE NOTES: Tonight’s win at Beaver Dam Raceway was the 17th World of Outlaws Sprint Car Series victory of the season for Donny Schatz… Four different drivers led during Saturday night’s feature – Shane Stewart, Kerry Madsen, Daryn Pittman and Donny Schatz… In addition to winning the feature, Donny Schatz was also the night’s KSE Racing Hard Charger, advancing nine positions… Joey Saldana picked up his eighth quick time of the season, the most of any driver after a qualifying lap of 11.611 seconds.