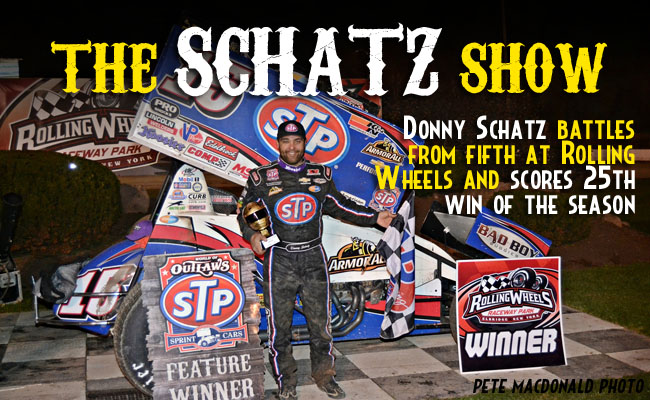 Schatz, who has won five of the last eight races in the midst of the winningest single season in his career, showed just how strong his Tony Stewart Racing team is after battling forward from fifth and leading the last nine laps of the feature.

“We’ve worked hard at it all year,” Schatz said of his STP / Armor All team. “These guys are definitely on their game. They just keep making things better. It’s an awesome machine to drive for sure. It’s tricky. We always enjoy coming (to Rolling Wheels) but it seems like every time we come here it throws us a little curveball and what you did last time doesn’t work (this time).”

Montrose, N.Y.-native Justin Barger led the field to the green after winning the dash earlier in the night. Barger led the first lap as Brad Sweet battled past David Gravel on the high side of turns one and two to take over second. On lap nine, as Barger began working his way through lapped traffic, Sweet caught him and then took over the lead.

Meanwhile, after initially falling back to sixth on the start, Schatz began making his charge to the front – first around Daryn Pittman to take back fifth on lap five and then past Kraig Kinser for fourth on lap seven. With leaders battling through lapped traffic, Schatz caught and then passed Barger and Gravel, moving into second.

Through the next five laps, Schatz closed the gap and then eventually caught Sweet who was leading. On lap 16, the two battled through turns one and two, drag raced side-by-side down the backstretch and dove into turn three – Sweet on the bottom and Schatz in the middle. As the two hit the middle of the turn, Sweet got caught up in the berm at the bottom of the track and spun, bringing out the first and only caution of the night.

With Sweet relegated to the back, Schatz chose the inside to lead the field back to green with Gravel in second. Gravel got the better start and led when the field returned to the start / finish line.

“(Gravel) obviously won the start there,” Schatz said. “I guess that’s the way it goes so we had to find a way back around him.”

Schatz did just that on the next lap. He dominated the final nine laps.

Schatz, who struggled early on at Rolling Wheels with an 11th place qualifying run, said his team rallied throughout the night to give him the car he needed.

“They rallied around and tried a few things in the dash and weren’t quite where we wanted to be,” Schatz said. “So we made all the right choices for the A and got the win.”

“You never know what’s going to happen. We didn’t have any more lap traffic after (our pass for the lead) until right at the end. So we tried to make all the right corners so I could get the thing where it needed to go. This STP team deserves to be standing here. They’ve won a lot of races this year – just an honor to drive this car.”

Schatz, a five-time Outlaws champion, extended his points lead over second place Daryn Pittman to 289. Paul McMahan remains in third 422 points out of the lead.

Gravel, who came into the night with the momentum of having just won the National Open at Williams Grove Speedway the Saturday before, said things have been clicking for his Roth Motorsports team the last couple of months. Tonight, he said continually changing track conditions challenged his team as they came just short of another victory with their second place finish.

“We changed a lot throughout the night,” said Gravel, a Watertown, Conn.-native. “I think we did a little bit too much there in the feature. It’s just something that we had to try. It’s a really slick racetrack and we had to get better from the dash to the A. We had a pretty solid car, but Donny had the better car.”

Pittman, who finished third for the second feature in a row in his Great Clips car, echoed Gravel, saying the changing track made it difficult to keep up.

“Man, we threw everything we had at it all night,” Pittman said of his Kasey Kahne Racing team. “I think we changed two or three bars every time we came off the racetrack which is pretty unlike this race team. We just never gave up. It didn’t feel like we unloaded great and maybe just missed the balance all night. We made good strides and tried to make big swings at it to make it better. And obviously running third is not a bad effort for us.”

Jessica Zemken, who has a season best Outlaws finish of third in just a handful of starts with the series this season, received the KSE Hard Charger award of the night after advancing six positions to finish in 11th.

ROLLING WHEELS RACEWAY PARK NOTES: Donny Schatz’s victory at Rolling Wheels was his 25th of the season – the winningest single season in Schatz’s career…Kerry Madsen picked up his seventh quick time of the season after a fast lap of 16.446 in qualifying… This was the second straight race with Donny Schatz, Daryn Pittman and David Gravel on the podium… Justin Barger, Donny Schatz and Ryan Smith all won their heat races Saturday night… Jessica Zemken received the KSE Hard Charger Award after advancing six positions to finish in 11th.