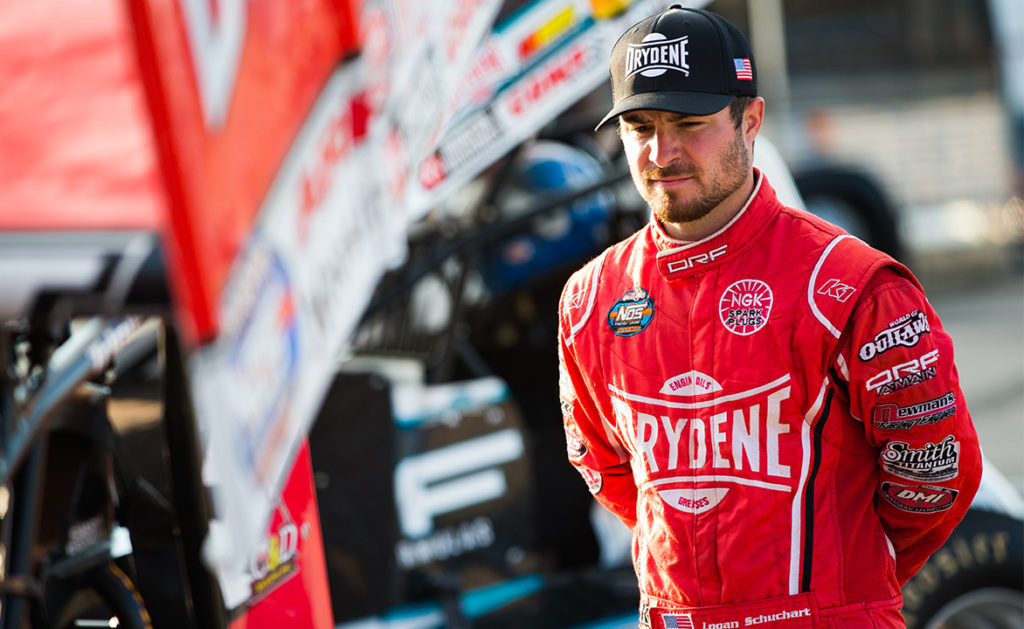 This year, with two races remaining, he’s in contention for his first Series championship.

The Hanover, PA driver is currently second in points with a 46-point deficit to reigning champion Brad Sweet, heading into the Nov. 6-7 World of Outlaws Last Call at The Dirt Track at Charlotte.

“From where we’ve came from, all that we’ve overcome to get where we are, you know, I feel like this is a very successful season as it is,” Schuchart said. “But, you know, we started the season with a goal of finishing third. We’re in there. But definitely, we know we’re in a spot with an opportunity and we’re going to try and take advantage of it. I feel like we have a lot to learn and areas of where we can get better. Hopefully we can make these last races count and put some pressure on him (Sweet).”

He started the year strong with seven top-five finishes in a row – two of them wins – and took the points lead at Knoxville Raceway when the Series returned to racing in May. A mistake while trying to catch Sweet for the lead at Beaver Dam Raceway in June took him out of the race and allowed Sweet to take the top spot in the standings.

A couple of weeks later he and his Shark Racing team found their footing again by winning the Jackson Nationals, which was their first crown jewel victory and Schuchart’s 20th career World of Outlaws win. They visited Victory Lane a couple of weeks later at the Terre Haute Action Track and then Schuchart reclaimed the points lead at Knoxville shortly after.

Despite having a run of 24 top-10 finishes in a row, which included a win at Devil’s Bowl Speedway, Schuchart lost the points lead again to Sweet at Huset’s Speedway and has been on the hunt to get it back ever since. The points gap between them has looked like an accordion with the level of their consistency swaying each week. Sweet has tried to pull away, but Schuchart has kept a tight enough grip on the defending championship to not let him out of reach.

Sweet admitted that while going after his first championship last year he let the points situation get to him at times. Schuchart, with a chuckle, said he doesn’t think he’s felt the same way, yet.

“It’s definitely brought up a lot,” he said. “So, it makes me think about it more than I really am. I’m not going to say I don’t look at it during the week or when I’m tagged on something on Twitter. I’m out here because I want to win races. I definitely want to win championships and what that would mean to my career. I feel like I’m young and have plenty of chances to do that and I want to continue to learn and get better and be the best I can be. With that, hopefully that will come.”

It’s been a vigorous journey to the top for the Shark Racing team, owned by Schuchart’s grandfather and Hall of Fame Sprint Car driver Bobby Allen. When the team brought Schuchart and Jacob Allen on the World of Outlaws tour full-time in 2014, Bobby Allen said each driver had one motor for the season. That meant they mostly had to fight to make Features and when they did, they couldn’t always run every lap.

Then sponsors like Priority Aviation (in 2018), NGK (in 2019) and their current full-time sponsor Drydene came on board, bringing more capital to the team. With more funding came more success and more ability to expand their program.

“When we pull into a racetrack, I don’t think anyone has better motors than we do,” Bobby Allen said. “And it wasn’t that way until this year. We had good motors, but you could run them part of the year, maybe three-quarters of the way. This year and next year we can be even with anybody at any given time. Logan and Jacob both.”

Schuchart’s focus will be to keep the pressure on Sweet during the Last Call. With two wins already at the 4/10-mile Charlotte track, he’ll look for one or two more and cut into the 46-point gap keeping him from a championship.

“Right now, we have our eye on finishing out the season strong,” Schuchart said. “Charlotte is a really good one for us. I’d just like to finish the season strong and hopefully get another win or two. It’s going to be tough to beat Brad (Sweet), but at least try to keep the pressure on him.”

For tickets to the Nov. 6-7 World of Outlaws Last Call at The Dirt Track at Charlotte, click here.