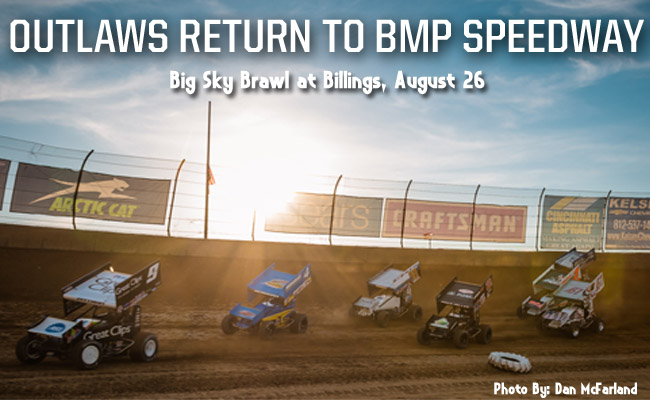 World of Outlaws Returns to BMP Speedway in Billings

BILLINGS, MT — May 31, 2017 —Tickets are now on sale for the Big Sky Brawl at Billings, featuring the World of Outlaws Craftsman Sprint Car Series at BMP Speedway in Montana on Saturday, August 26 and can be purchased online at slspromotions.ticketforce.com or by calling SLS Promotions at 815-344-2023.

Joey Saldana won the last World of Outlaws Craftsman Sprint Car Series event at BMP Speedway, then Billings Motorsports Park in 2008. The veteran driver charged from the seventh starting spot to pick up the win over eight-time and reigning series champion Donny Schatz. Saldana steadily worked his way forward, taking the lead from Schatz on the 10thlap of the 25-lap race. Schatz ended up second, with Shane Stewart in third. Six drivers that competed in that race back in 2008 are full-time World of Outlaws Craftsman Sprint Car Series competitors that will be in attendance this season.

Battling Schatz and Saldana in 2017 is a talented group of full-time competitors including David Gravel who has eight wins this season and is second in points, Brad Sweet, who has a pair of victories and rides third in the current standings, Jason Johnson, who sits fourth in points, with two wins and 2013 series champion Daryn Pittman, who rounds out the top-five in the standings.

Shane Stewart, who recently picked up his first win of the season is just outside of the top-five in points, followed by rookie Sheldon Haudenschild, Logan Schuchart, who has three wins, Saldana and fan favorite Jason Sides, who rounds out the current top-10.

Paul McMahan is back on the road again this year, along with fellow veteran drivers Kraig Kinser and Greg Wilson. The two youngest drivers on the road are teenager Clyde Knipp from Missouri and Jacob Allen, who is Schuchart’s teammate at Shark Racing. Brent Marks from Pennsylvania, is battling Haudenschild for the Kevin Gobrecht Rookie of the Year Award.

Tickets for the Big Sky Brawl at Billings, featuring the World of Outlaws Craftsman Sprint Car Series at BMP Speedway, on Saturday, August 26 can purchased online at slspromotions.ticketforce.com or by calling: 815-344-2023.