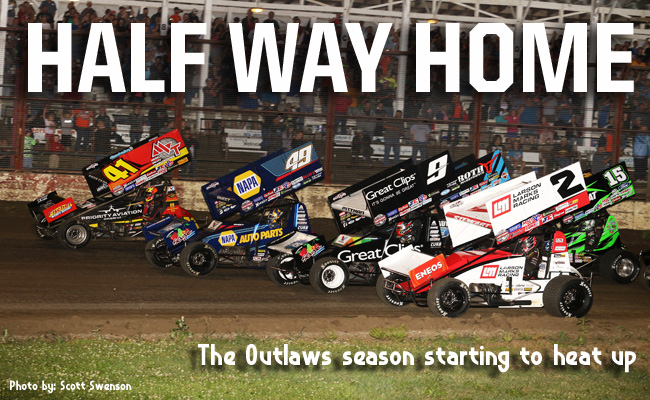 The Outlaw Season Is Just Starting to Heat Up

CONCORD, NC —July 5, 2017 — As the summer months start to ramp up, so does the competition. The World of Outlaws Craftsman® Sprint Car Series hits the halfway point of the 2017 season, and it’s already shaping up to be one of the most exciting seasons in recent history.

Don’t hand the trophy out just yet; the championship battle is just getting underway. After getting off to a hot start to the 2017 season by winning six of the first eight races, eight-time and defending World of Outlaws Champion Donny Schatz went on a little bit of a cold streak from mid-March to early-May.

During that time, David Gravel and the CJB Motorsports team has picked up the pace with five wins — closing the once big-lead that Schatz and the Tony Stewart Racing team had.

“Someone will go on a little bit of a streak, then someone else will,” said Gravel. “It’s three really, really good teams [CJB Motorsports, Kasey Kahne Racing and Tony Stewart Racing], and it’s hard to beat them every night.”

The Watertown, CT-native has nine wins through the beginning of July, already tying his 2016-win total. While running just outside the top-five in the closing laps at Dakota State Fair Speedway, Gravel’s point standing took a hit when the No. 5 machine went for a flip, relinquishing Gravel back in the finishing order. Gravel now sits 110 points behind first place.

“We have a goal; we want to win the World of Outlaws championship,” said Gravel. “To win nine races to this point of the season is a little bit more of an overachievement. It’s already matched what we did last year, but we definitely want to get to double digits, ‘cause not many people have double-digit wins. Hopefully we can do that this year and contend for the title and keep Donny [Schatz] honest all year.”

Meanwhile, Schatz seemed to have hit on something while at Knoxville Raceway just a couple weeks ago.

“We haven’t been on pace the last couple months,” said Donny Schatz following his victory at Knoxville Raceway. “You keep looking for little things that aren’t right. One thing here. But we found three things. And so, that’s why I’m smiling. I’m a happy guy. I got my feel back. I can feel all four corners again, and that’s important.”

Since getting his “feel” back, the No. 15 Arctic Cat team has won four of the last eight races.

Schatz’s most-recent competitor in the championship battle, Brad Sweet currently sits second in points, just 78 points behind Schatz in the championship points battle. Sweet has shown speed throughout the season and has been Mr. Consistent, racking up four wins, 30 top-five finishes and 36 top-10s.

“I think we spent the first little bit of the season just searching,” explained Sweet of the new pairing with Crew Chief Kale Kahne in a recent Speed Sport News article. “We were both trying to figure out what each other likes and get the car faster. Lucky enough, we hit on a few things and have been really fast lately. We just keep working on our car to fine tune things and get it better. The car has been fast each and every night, and that’s all you can ask for out here.”

One of the most talked about events of the season was when Monster Energy NASCAR Cup Series standout, Kyle Larson teamed up with fellow NASCAR star, Ricky Stenhouse Jr. to drive the Stenhouse Jr./Wood Racing No. 17x at Eagle Raceway on June 13.

After coming up just short of a win a couple weeks prior at Lawrenceburg Speedway, Larson used a mid-race restart to advance his position. Larson would ride the cushion as the laps wound down to shoot past Shane Stewart and Daryn Pittman en route to his first World of Outlaws win since 2013.

This win for Larson would set up an unbelievable week. He went on to start on the pole for the Cup race at Michigan International Speedway and eventually win the race, making him the first driver to win a World of Outlaws event and a NASCAR Cup Series race in the same week

Larson has announced he will run with the Outlaws at the Ohio Logistics Brad Doty Classic at Attica Raceway Park on July 11 and Ohsweken Speedway for the Arrow Express Six Nations Showdown on July 25.

The driver of the No. 2 Larson Marks Racing entry has found himself in contention at several races this season; he just ran into trouble sealing the deal when it counted. With two wins on the season and fourth in points, Shane Stewart was looking for more. That ‘more’ came with a weekend sweep at West Liberty and Beaver Dam and nearly a win at Dakota State Fair Speedway, having led all but the final lap eventually finishing third. Part of this success could be due to new crew chief, Lee Stauffer who joined the Larson Marks Racing team just before West Liberty.

“[Larson Marks Racing] has all the right tools, we just need to put them in the right position,” said Lee Stauffer during a recent episode of Open Red on WoOSprint.com. “I may approach things a little differently where I try to simplify things, making it not so hard to transition from the warmups to time trails to the races.”

Stewart now has four wins at the halfway mark of the 2017 season, half the amount of wins he had in 2016. It appears that the Larson Marks Racing team has hit on something that could make this a four-car battle in the points as the Summer goes on.

As Shark Week approaches, Shark Racing always seems to be lurking. On one of the biggest stages of the season, Logan Schuchart picked up his second and third victories of the season at the famous Eldora Speedway and under the bright lights of The Dirt Track at Charlotte Motor Speedway — the most wins by any driver outside of the top five in points.

Two drivers battle it out for the Kevin Gobrecht Rookie of the Year award, Sheldon Haudenschild and Brent Marks. Joining the Series full-time for the first time, the young Haudenschild has shown flashes of promise. With what looked like it could have been his breakout race, Haudenschild was is in control at Tri-State Speedway until he came into contact with a lap car while leading. The younger “Wild-Child” had one get away. The Wooster-OH-native has had a solid season, however, tallying six top-fives and 20 top-10s sitting in seventh in the point standings through the halfway point of the season.

“We’ve shown some pretty good speed,” said Haudenschild. “We’re just trying to stay consistent, but I think once we are able to break through for a win, you’re probably going to see more than one win come.”

The other Kevin Gobrecht Rookie of the Year contender is Brent Marks. After running in the Pennsylvania area last year as well as hitting the road, Marks appears to be settling in nicely as a full-time Outlaw. 11 top-10 finishes and 11th in the championship point standings, Marks will benefit during the second half of the season as the Series makes its way back east to familiar territory.

“Honest, we feel kind of behind the eight ball from where we want to be,” said Brent Marks. “We’ve been trying to average a 10th-place finish, but we’re not quite there; and top-10 in points, and we’re just outside of it. I knew it was going to be hard coming in but didn’t realize it was going to be quite as hard as it actually is. A lot of these tracks are just different than I’ve been accustomed to racing. Everything we’ve learned back home in Pennsylvania doesn’t exactly work out here.”

“Going back home and getting to places you’re familiar with can give you a confidence boost and help you finish out the season well,” added Marks. “We’re hoping to go back home in a couple weeks, run good in front of our family, friends and sponsors. It could an opportunity to gain some lost ground.”

Some of the biggest news to break so far during the 2017 season has been a driver change in the Stenhouse Jr./Wood Racing stable. Joey Saldana previously piloted the No. 17 machine until it was announced in late-June that the team had parted ways with Saldana. Enter Jac “Wild Child” Haudenschild to fill the seat of the No. 17 at West Liberty Speedway and Beaver Dam. However, a concussion has sidelined the team with a medical exemption. No word yet on who will take over the No. 17 seat for the rest of the 2017 season, but rumors abound. (Just look for them on Twitter, and follow us while you’re there.)

The Series heads into the “Month of Money” with the The FVP Platinum Battery Showdown at Cedar Lake Speedway for a two-day event July 7 and 8. The stretch of races continues with the Brad Doty Classic at Attica Raceway Park, the Kings Royal at Eldora, the Don Martin Memorial Silver Cup $25,000-to-win, Summer Nationals at Williams Grove Speedway, the Big R Shootout at Ransomville Speedway presented by Budweiser – a busy month that has big rewards. All this is a big tune-up for the Ironman 55 at Federated Auto Parts Raceway at I-55 on August 4-5 and the 5 Hour Energy Knoxville Nationals at Knoxville Raceway on August 9-12