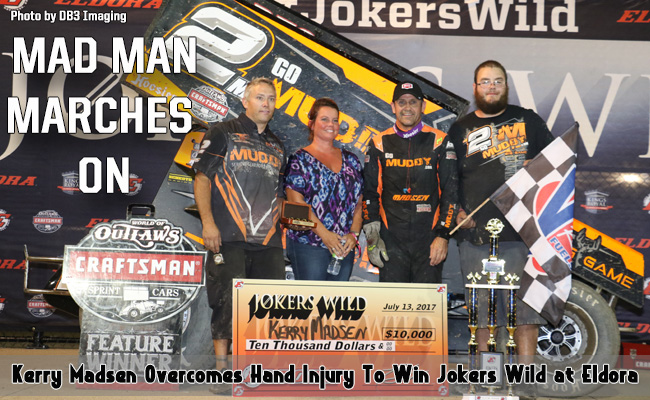 ROSSBURG, OH – July 14, 2017 – After a three hour rain delay in the early evening, Kerry Madsen dominated the World of Outlaws Craftsman® Sprint Car Series Jokers Wild event at Eldora Speedway on Thursday night that stretched into the early hours of Friday morning. Madsen was third-quick in Flight A qualifying and second in his heat before claiming victory in the Craftsman Club Dash. The Dash win gave Madsen the pole for the 30-lap, $10,000-to-win Jokers Wild and he led every circuit to score the win in convincing fashion.

Madsen’s win to begin the 34th annual Kings Royal weekend is even more impressive after he revealed in Victory Lane he battled an injury throughout most of the race after a rock cut his hand in the opening five laps. The Australian pilot persevered through the pain to claim his fourth Outlaw win of the season and the third in the Series’ last four races.

“A couple of times the car took off on me and I didn’t quite have the wheel,” Madsen joked about his injury after he was treated following the race. “I could just see all the blood in the glove. It was hurting, but I just kept going.”

Off the initial start, Madsen grabbed the early lead while fellow front row starter Brad Sweet drag raced Madsen into turn three for the lead. The battle was short-lived, however, as Brady Bacon flipped in turn two before the opening lap was complete to bring out the red flag. Bacon was uninjured.

“I got side-by-side down the backstretch,” Sweet said of the start. “Kerry left just enough there and I had a run. He was able to go across the track in turn three and take some air off my car and, honestly, that was kind of the race. He was really fast out in clean air. There was definitely no catching him there.”

Madsen set a blistering pace on the lightning quick track and worked into traffic on lap eight. While the bottom was the preferred lane, Madsen drove to the top on the cushion that was slightly more than halfway up the track to work past the slower cars.

The dirtier top lane for Madsen did slow his pace slightly and allowed Sweet to pull within one second of the No.2m. It was a short glimmer of hope for Sweet though as the caution waved on lap 12 when Logan Schuchart suffered a broken front axle and came to a stop in turn four.

The yellow flag gave Madsen the clean air he needed on the restart to pull away from Sweet again and he did just that. By lap 18, Madsen had opened a 1.7-second gap over Sweet while Brian Brown battled with David Gravel for the third position.

“I knew the starts were going to be super important because if someone got a lead and got through traffic, you weren’t going to get them, so it was super critical,” Madsen explained. “When we got to the traffic, I was just trying to be super aggressive with it and go hard at it because you know what those guys are like, they’ll pass you in two seconds if you screw up.”

Madsen again caught traffic on lap 20, but this time was able to navigate the slower cars more efficiently with his aggressive game plan. He continued at his lightning-quick pace over the final laps and drove off to the victory by 2.6 seconds over Sweet. Brown raced to a third-place finishing after holding off Gravel in an exciting third-place battle. Tim Shaffer got by Gravel late to claim fourth while the No.5 settled for fifth.

The victory continues a red-hot streak for Madsen who has now won in each of his last three Outlaw starts after he swept last weekend’s events at Wisconsin’s Cedar Lake Speedway. Madsen is far from surprised by his team’s most recent success.

“I’ve been saying it all year and I feel like we’ve been super under the radar,” Madsen said. “We’ve had like 10 second (place finishes) and a few wins now. It’s fast. I know the performance has been there all year, we just haven’t caught the breaks to get the wins, which I feel like was a good thing because we just kept making the car better.”

Sweet settled for a second-place finish, which felt like a victory for the Grass Valley, CA native after beginning the night with a seventh-place qualifying effort.

“We weren’t that great tonight, to be honest,” Sweet said. “We didn’t qualify great, but we had a really good start in our heat and got up in there to give ourselves a chance. Then they drew the six (inversion pill) and that was a lottery pick. Sometimes you’ll have nights like that where things go a little more your way then other night.

“We realize we have to get the NAPA Auto Parts car a little faster if we want to really have a shot at it Saturday night,” Sweet continued. “We’ll take a second tonight. Kerry’s been awful fast and did a great job there. We’re hungry to win and we’re knocking on the door. We just need to get the car a little better and the driver needs to do a little better job.”

Gravel was the night’s overall fast qualifier with a lap of 12.847 seconds around the half-mile track, just 0.140 seconds off Craig Dollansky’s 2002 track record of 12.707. Shaffer, Ian Madsen, Gravel and Brown won qualifying heats. Cole Duncan won the Last Chance Showdown while Trevor Baker won the C-Main.Brent Marks was the night’s KSE Hard Charger after racing from the 24th starting position up to 12th, an impressive achievement on a very fast racetrack.

The World of Outlaws Craftsman Sprint Car Series returns to action at Eldora on Friday night with the Knight Before the Kings Royal. The event will be broadcast live on DIRTvision.com. For additional event information or to buy tickets, please click here.

For complete results from the Jokers Wild at Eldora Speedway, click here.