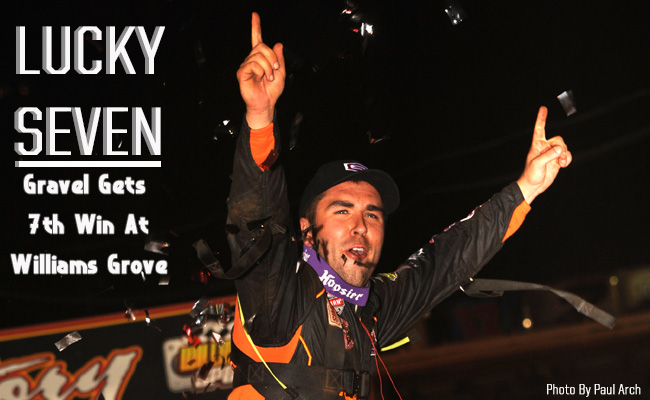 David Gravel withstood a late surge from Donny Schatz and a pair of restarts with less than five laps remaining to kickoff the weekend with a Spring Classic presented by NAPA and NGK win at Williams Grove Speedway on Friday night.

Gravel started on the pole for the 25-lap main event after winning the Craftsman Club Dash and led flag-to-flag despite restarts with three and four laps remaining in the main event. It was the second win of the week in Central Pennsylvania for the Watertown, CT native who also won at Lincoln Speedway on Wednesday. It was also Gravel’s seventh victory of the season.

“It’s definitely huge to win in PA at all,” Gravel said. “To win Lincoln and Williams Grove is really good. We have to enjoy this a little bit tonight, but tomorrow’s a new day. We’re really happy with where we’re at right now and we’ll keep moving forward.”

After timing second quick in Flight B Qualifying and finishing second in his heat, Gravel was scheduled to roll off eighth for the Dash in his CJB Motorsports No.5, but an eight inversion draw put him on the pole and he never looked back, scoring wins in the Dash and Feature just as he did Wednesday night at Lincoln.

“I’m definitely lucky right now,” Gravel concluded. “I need to play the lottery or something. It’s just one of those things where when it goes your way, it goes your way. Last year, Daryn Pittman got a lot of draws that went his way and right now it’s our time. It goes in phases. It’s a long, long season and we’ll take it when we can.”

Gravel brought the field to the green flag for the main event with Brad Sweet starting on the outside of the front row aboard his Kasey Kahne Racing with Mike Curb No.49. Gravel jumped to an early lead while fifth-starting Schatz overtook Daryn Pittman for fourth on lap two. The caution waved one lap later when Lucas Wolfe and Joey Saldana spun and stopped against the turn three wall.

An 18-lap green flag run followed, allowing Gravel to extend his lead to 1.806 seconds over Sweet by lap 10. However, it withered away when Gravel caught lapped traffic at the halfway mark and Sweet began to close the gap. Right behind the two leaders, Schatz worked past Greg Hodnett for the second time in the race to acquire the third spot.

With six laps remaining, Gravel struggled to find a line around the slower car of Jason Sides. That allowed Schatz to catch the two leaders and the reigning series champion took second from Sweet with four laps to go.

Two more cautions with four laps to go kept Gravel on his toes, but he rode the cushion flawlessly on the outside of the speedway, disabling any of Schatz’s attempts to take the lead.

“That’s just typical lapped traffic,” Gravel said. “You get caught up and you have to pass some guys before the second-place guy passes you. I got by Sides and I actually thought I was pretty good. I probably didn’t want a yellow. After I got past Sides, I thought I would be able to work the lapped cars pretty good and then the yellow came out. I got a good restart and then the yellow came out again. I didn’t want that second yellow, but it worked out and we held on.”

Schatz felt that if the yellow flag had not waved with four laps to go, he would have had a chance to catch and pass Gravel for the $8,000 payday.

“Everything we run is longer races so you have to be prepared for the end,” Schatz said, explaining his surge over the final 10 laps.” That’s what you shoot for – trying to be good at the end of the race and we were definitely good at the end of the race. We just didn’t need to see that yellow (with four laps to go). When you get traffic, you force (the leader) to move out of their line and that’s what we needed. When the yellow came out, I knew it was going to take a miracle.”

The miracle didn’t happen for Schatz as Gravel executed flawlessly on the pair of single-file restarts by running the fast top lane and by taking away Schatz’s preferred corner entry.

For Freddie Rahmer, the third-place finish was worth celebrating. Rahmer was the top finishing Pennsylvania Posse member ahead of Hodnett, who finished fifth. He felt he may have had something for Schatz if he could have changed one of his late-race restarts.

“I couldn’t do anything in (turns) three and four because Donny was where my car was the best,” Rahmer said. “Just the way it played out, we ran third. I think we’re fast enough to win, we just need a different scenario.”

Joey Saldana was the night’s overall fast qualifier with a lap of 16.639 seconds. He also picked up a heat race win along with Rahmer, Schatz and Pittman. Logan Schuchart earned the KSE Hard Charger award for advancing from 18th to 11th.

The Outlaws remain at Williams Grove for Saturday’s Morgan Cup. Drivers are expecting significantly different track conditions with an expected temperature drop to the mid-60s on Saturday from the high-80s on Friday.

“The track was really heavy for how warm it was,” Gravel said. “We’ll see. Tomorrow’s going to be cooler, but the track might be slick or it might be even heavier than tonight.”

Saturday’s Morgan Cup at Williams Grove will once again be available via live pay-per-view on DIRTvision.

For complete results from night one of the Morgan Cup at Williams Grove Speedway, please click here.