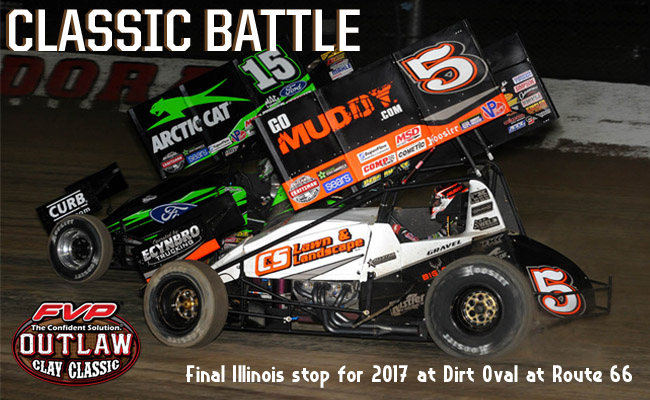 World of Outlaws converge at Dirt Oval at Route 66 Raceway

CONCORD, N.C. — June 13, 2017 —  In Joliet, IL, within the footprint of a state-of-the-art NASCAR facility, sits a premier dirt racing facility, the Dirt Oval at Route 66 Raceway. The 3/8-mile dirt oval will shine bright when the World of Outlaws Craftsman® Sprint Car Series and Late Model Series converge in Illinois for a two-night event on Tuesday and Wednesday, June 27 and 28 for the FVP Outlaw Clay Classic.

While the inaugural event was held at Rockford Speedway, the second annual FVP Outlaw Clay Classic has a new home for 2017. Just 45 miles from Chicago, IL, on the compounds of the Chicagoland Speedway, the Dirt Oval at Route 66 Raceway features a large grandstand, blacktop camping, and numerous food and beverage vendors. Although the Dirt Oval is a multi-purpose facility also capable of hosting off-road trucks, demolition derbies and monster trucks, the FVP Outlaw Clay Classic will be one of the biggest events the track has hosted.

The nation’s two premier dirt touring Series will once again be coming together during the second annual FVP Outlaw Clay Classic at the Dirt Oval at Route 66 Raceway, giving fans their only chance to see both World of Outlaws Series on consecutive nights before the World of Outlaws World Finals at the Dirt Track at Charlotte in November.

The World of Outlaws Craftsman Sprint Car Series takes the track on Tuesday, June 27 for night one of the FVP Outlaw Clay Classic. This will make the first time since 2005 the Outlaw Sprint Cars will take to the Joliet oval. At last year’s inaugural event at Rockford Speedway, Donny Schatz held off a charging David Gravel. Currently, Schatz and Gravel are one-two in the point standings as both inch closer to the double digit win mark on the 2017 season.

The Sprint Cars will set the stage for the World of Outlaws Craftsman Late Model Series who will take to the track for the Wednesday finale. Much like the Sprint Cars, the Late Models will be making their first visit to the Raceway for the first time since 1999 as the Hav-A-Tampa Series. In the 2016 version of the FVP Outlaw Clay Classic, it was Illinois-native Brian Shirley who led all 30-laps en route to his second win of the season. Shirely has recorded one win so far this season at another Illinois track, Farmer City Raceway. He would love nothing more than to repeat as FVP Outlaw Clay Classic winner. He will have to hold off challenges from Brandon Sheppard, Devin Moran, Chris Madden and the rest of the full-time Outlaws.

Don’t miss the World of Outlaws Craftsman Sprint Car Series as they make their final visit to the state of Illinois for the 2017 season.

Reserved, blacktop camping for the FVP Outlaw Clay Classic is available by calling the track at 815-740-8000.

Advanced grandstand Reserved seats at $40 for adults (ages 15 and up) for each night. Reserved seats for children (14 and under) are $20. Two-day grandstand Reserved Seat packages are $70 for adults and $40 for children. Adult General admission tickets are $35 for Tuesday and Wednesday; $70 for both. Children general admission tickets (14 and under) are free. All advanced tickets include a FREE VIP Pit Pass Upgrade (All-Access Pass). To purchase your tickets, call 844-DIRT-TIX or go online at www.WorldofOutlaws.com/Tickets.

Season’s End – A Finale on The Dirt Track