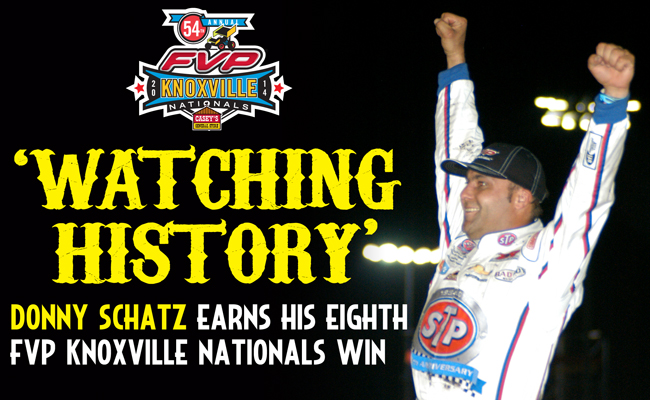 With ten to go, Brown, who was running second in his FVP/Casey’s General Stores car after starting fourth in the feature, closed the gap on Schatz, who had led most of the A main.

“I just didn’t know how I was going to beat him,” Brown said. “I pulled my wing back a little bit – I kind of laid left on my left rear. I got myself a little more plugged in there. It was like we just took back off.

“I don’t know if the bottom slowed down or if I got better but we were able to catch (Schatz) there with (7 to go). I knew myself I probably should be going that quick to pass him because I knew if I showed him he was going to get his elbows up. I felt like if I were to get caught up on the cushion I wasn’t going to get the opportunity so I had to go. I got by him – went to the bottom, protected the bottom…”

The crowd at Knoxville erupted for Brown as he crossed the start-finish line to lead a lap.

Schatz said he was surprised how well Brown was able to get around on the top of one and two.

“I tried early when we got to lapped traffic and I couldn’t make it work,” Schatz said. “That’s the way it works – it’s all about making the right decisions.”

The next lap, Schatz looked inside and was able to clear Brown to retake the lead. Brown battled with Schatz during the remaining laps and despite at least one promising look for the lead, he was never able to get back around.

“It’s unbelievable – it feels so unreal, like it’s not happening,” Schatz said. “I haven’t gotten a chance to get with the (STP) team and celebrate, but I definitely want to enjoy this. We raced good and hard with Brian. I had an awesome car all week long. Not very often that you get a car that good but these guys have worked awful hard to get us in this position and they put it on my shoulders when we went.”

The win, which included a $150,000 payday for Schatz and his STP/Armor All team, was all the sweeter for the driver who is celebrating a birthday on Sunday.

Brown said at the end of the day, Schatz had the better car when it counted. He said he had mixed emotions about his second place finish but that he was ready to come back to Knoxville to take on the track once again.

“I think the big thing is I just want to congratulate Donny Schatz – eight out of nine and being able to do such a feat like that is pretty special. We’re watching history. Somebody’s going to beat him sooner or later and I hope it’s me.”

Third place finisher Kerry Madsen said that he was hoping he could make up ground on Brown and Schatz with his American Racing Custom Wheels car as the two battled for the lead. Ultimately though he said he just wasn’t quite good enough.

Madsen, who led the Knoxville points coming into Friday’s qualifier, said he is thrilled with his run, even if he did not win and with the performance of his team right now.

“It’s mind boggling,” Madsen said. “The last two months have just been – you couldn’t dream about it.

“I’m actually double edged because I’m slightly disappointed not to win – we weren’t quick enough to win but on the other hand I’m so proud for our organization our team, our sponsors, our owners that we got a podium in the Knoxville Nationals. It’s been just fantastic. I’m so excited because with our crew chief Tyler Swank, we’ve only been together eight months…. But the future is bright.”