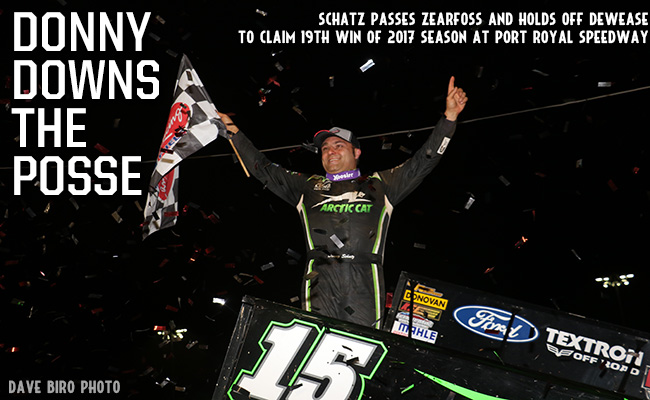 The Craftsman Club Dash Inversion was eight, putting Zearfoss on the pole. Zearfoss, who scored his first career World of Outlaws Craftsman Sprint Car Series victory back in July at Williams Grove, led all six laps of the Dash to earn the pole of the 30-lap Feature.

Zearfoss edged fellow front row starter, Jason Sides to lead lap one. As Zearfoss extended his lead, Schatz worked by Sides for the runner-up position on lap three. It didn’t take long for the leaders to catch traffic as Zearfoss did so on lap six. The Jonestown, Pennsylvania native was strong in traffic, utilizing the top of the Speedway to clear the first five or so lapped cars. Just as Schatz began cutting into Zearfoss’ lead, last year’s event winner, Logan Schuchart came to a stop with 14 laps complete.

On the ensuing double-file restart, Zearfoss choose the bottom but quickly made his way back to the top of the racing surface. Schatz attempted a pair of sliders in turn one, but Zearfoss never lifted and maintained the lead. On lap 18, Zearfoss went a couple car lengths lower in turns one and two allowing Schatz to get enough momentum down the backstretch and take command going into turn three.

A lap later, Tim Shaffer brought out the yellow with 11 laps remaining with Schatz as your leader. Schatz, who chose the inside for the double-file restart, got a good restart, allowing Lance Dewease to work by Zearfoss for second. As Dewease and Schatz put distance between themselves and the rest of the field, Zearfoss began to fade, eventually bringing out the caution with two to go, out of fuel.

The restart gave Pennsylvania Posse member Lance Dewease one last chance to steal the victory for the hometown crowd. Dewease stayed right on the back bumper of the Tony Stewart Racing No.15 on the restart and brought the crowd to their feet with a slide job into turn one. Schatz stayed on the hammer and powered back in front down the backstretch and went to win by .792 seconds.

When asked about the restart with two go Schatz said, “I knew [Lance] was going to try something. We weren’t the greatest on the start, but once we got up to speed I could move around the racetrack. He races clean. He gave me just enough room to get by. We come here for excitement and that got me excited so I hope it got the crowd into it too.”

Dewease, who has 106 career Port Royal Speedway victories, was happy with second. “That’s all we had,” he said in regard to the late race restart slider. “[Donny] was really good all night. We’re happy to end the year with a ninth to second run against these guys,” Dewease added.

Before Daryn Pittman could comment on his 10th to third run, he applauded the Port Royal Speedway. “Our guys work really hard on our racecars, so it’s fun to go to tracks that you can see the effort they put into the track. For a driver that only gets here once a year, you see the huge differences and improvements,” Pittman, who spent a handful of years racing as a local in Central Pennsylvania, said.

“With the way we started, we’ll take third,” Pittman, who fell as far back as 11th, said. “Late restarts went our way and some holes opened up. The track was nice and wide for the Feature, the best cars ended up winning and running up front. As a racer, that’s all you can ask for,” the Oklahoma native added.

Schatz echoed the positive statements about the improvements. “This place is incredible. The improvements, the lighting, everything. It’s crazy the amount of work and financial effort Port Royal is putting in. When you come here, you know the parking lot will be full; the pits will be full and you’ll see a race,” the eight-time series Champion said to a nice applause from the Pennsylvania fans.

The World of Outlaws Craftsman Sprint Car Series returns to action in New York Sunday evening at the Weedsport Speedway and again at the Ransomville Speedway Monday night. Both races are makeup rain dates from earlier this year. DIRTVision.com will have live video coverage of all the action from Weedsport Sunday. For more information about the Empire State Challenge at the Weedsport Speedway, click here.

Full Results from Port Royal Speedway are available on the World of Outlaws website under the ‘results’ tab.