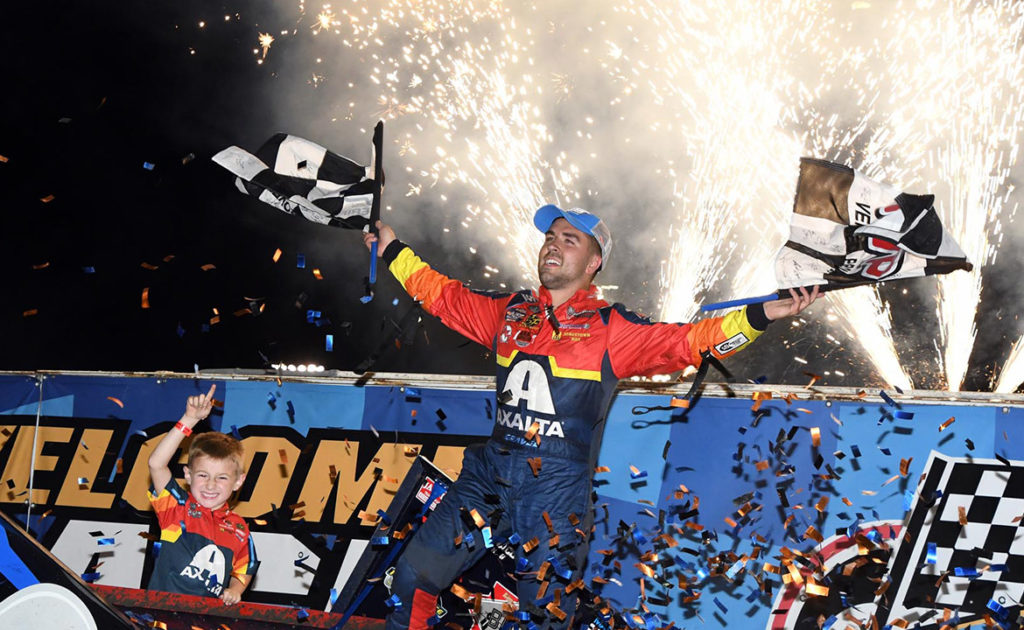 “And we F’ing did it,” said a jubilant David Gravel, standing in Victory Lane with his Jason Johnson Racing team as the Knoxville Nationals champion for the first time in his career Saturday night at Knoxville Raceway.

“It just feels amazing,” Gravel said. “I don’t know what else to say. It feels really surreal. It doesn’t feel real at all.”

The Watertown, Conn.-native won the 59th annual NOS Energy Drink Knoxville Nationals presented by Casey’s General Store in his first year with Jason Johnson Racing. And the pair did it in dominating fashion.

They started off their week in Knoxville, Iowa by winning Knoxville’s Capitani Classic. Four days later, debuting a new blue and fluorescent color painted car with Axalta on the side of it for the first time, Gravel won his preliminary race for the Nationals – earning a second-place starting position for Saturday’s Feature.

A few hours later, after holding an E-Main, D-Main, C-Main and Last Chance Showdown – which saw Gio Scelzi, Donny Schatz, James McFadden and Rico Abreu transfer to the Feature – it was race time.

The field of 24 cars was set. More than 20,000 people – triple the town’s population – filled the grandstands. The crackling of fireworks echoed around the half-mile raceway.

Once the cars filed in two by two, flagman Doug Clark waved the green flag in front of the field for the final time at the Knoxville Nationals. Polesitter Aaron Reutzel launched to the lead past Gravel with Joey Saldana in his tire tracks. Saldana slid to the cushion in turn one in front of Gravel to take second.

Exiting turn four Reutzel hit the inside berm, got out of shape and allowed Saldana to get a run on him from the high side. Saldana stuck to the cushion in turns one and turn two, finding enough grip and momentum to charge around Reutzel for the lead.

Hugging to the bottom, Reutzel got back in his groove and ran Saldana down two laps later to retake the lead. Their battle wasn’t over yet.

After two cautions – including one for Donny Schatz having throttle linkage issues – Saldana found himself back on Reutzel’s bumper. The “Brownsburg Bullet” continued to run the cushion, while Reutzel remained low. However, with Saldana closing, Reutzel changed lines in turns three and four, moving to the side high. The lane switch blocked Saldana’s run and helped Reutzel extend his lead.

While the two battled, Gravel watched. Waited. He knew there was plenty of time to make a move in the 50-lap Feature.

“I didn’t get too excited,” Gravel said. “I knew if we fell back to fourth or fifth it would be kind of hard to battle back up there and contend for the win. Just kind of fell into third there.”

Once the lead was back in striking distance, Gravel pounced. Running the bottom, he drove past Saldana for second on Lap 10 and then methodically inched his way to the leader. Three laps later, with his front bumper close to Reutzel’s tail tank, Gravel threw a slide job at the Texan in turn three and made it stick off four.

When the score board clicked off another lap, Gravel was officially the new leader on Lap 14. From there, he set his Axalta No. 41 on cruise control until the scheduled caution on Lap 25.

“I just let the race come to me,” Gravel said. “Just, luckily, I was able to maintain third there early. I think that was huge and kind of see what lines worked where and what was the best place to be.”

Before the scheduled caution, Daryn Pittman was on a charge. From his 10th starting spot, Pittman worked his way to third-place, having to fight hard for it with Saldana and Tim Kaeding.

Once the race hit Lap 25, Gravel’s lead evaporated. All 24 cars were brought to the infield and teams were given three minutes to make any adjustments. Despite their speed, the Jason Johnson Racing did take the time to make a few tweaks. However, Gravel said with a chuckle, if he told you what they were he “might have to kill you.”

Whatever they were, they worked.

Gravel shot to the lead on the restart, immediately putting about a half a straightaway lead between he and Reutzel. A new contender emerged, though. Pittman, continuing his earlier charge, worked his way around Reutzel for second and began to track down Gravel.

The difference in speed was apparent. Pittman was making the high side work better than Gravel, inching closer every lap.

Two years ago, Gravel had a motor blow while leading the Knoxville Nationals. This year, it looked like Pittman might spoil his shot at a win once again.

But Pittman wasn’t always consistent against the cushion. At times he would hit it wrong, upset his car and lose time to Gravel. It only took a couple of bobbles by Pittman for Gravel to pull away.

Gravel was back on cruise control. He just wanted to win.

Behind the top-two, Logan Schuchart was in a league of his own. From his 22nd starting position, he made his way to ninth by the halfway point. Then found himself in the top-five four laps later. With less than 10 laps to go, he was in third and closing on Pittman. With lapped traffic becoming a factor, Schuchart was able to steal second from Pittman on the last lap.

“To start 22nd and run second at the Knoxville Nationals is pretty awesome,” Schuchart said. “There’s good and bad second-places. The Kings Royal was a tough one. I wasn’t smiling a whole lot on that one. But tonight, I’m smiling.”

Pittman admitted there are also good and bad third-place finishes. His falls somewhere in between.

“Pretty frustrated that we lost second on that last lap,” Pittman said. “A lapped car just made a mistake in front of me.

“On one hand I’m really happy and really proud of this Roth Motorsports team and the effort we’ve put into Knoxville Raceway all season long, especially tonight. On the other hand, I’m pretty disappointed that I feel like that’s the best car I’ve ever had here and the best chance I’ve ever had to win this race.”

Gravel had his own issues with lapped cars in the closing laps. One bounced off the wall in front of him and others blocked his line. They slowed his pace, but not enough to put him in any danger.

He sped by the duel waving checkered flags with a more than 4.5 second lead over Schuchart.

“I’ve put myself in position a lot of times after prelim nights and never had anything to show for it,” Gravel said. “You know, my best finish is 10th. I feel like I’ve always been pretty good here, but no results Saturday night. Obviously, the JJR 41 gets around here good and it shows. It’s just a dream week. I’m numb right now. I don’t even know what is going on.”

The win was joyous and emotional for the entire team, especially team owner Bobbi Johnson, Jason Johnson’s wife, who made the decision to keep the team going after Jason’s death last year.

“I’m still trying the fathom it,” Bobbi Johnson said about the win. “You dream of this stuff.”

In the back of the JJR trailer is a list of goals. Johnson said the team usually sets goals every year. They weren’t going to this year, but then decided to do so. One was to win the Kings Royal. That didn’t happen. But there was still one goal on the list – win the Knoxville Nationals.

“It’s just phenomenal, unreal,” said Johnson, slowing her sentences to hold back the emotion. “Words can’t say what goes into all of the behind the scenes of something like this. I’m just thankful Jason was a great teacher and leader to me.

“If I wouldn’t have known the ins and outs and a lot of the other stuff and have (crew chief) Philip Dietz and these two (crew member) boys that stuck with us after the passing of Jason, there’s no way this team could’ve did it. And it took a whole ‘nother army of sponsors to even be here to compete. So, I have to thank everybody that’s out there, and all of the fans. There’d be some down nights and I’d read some of the messages, and they’re very touching. I don’t know if words could every describe it.”

They just wanted to see them win.

As always you can catch all of the action LIVE on DIRTVision.com.