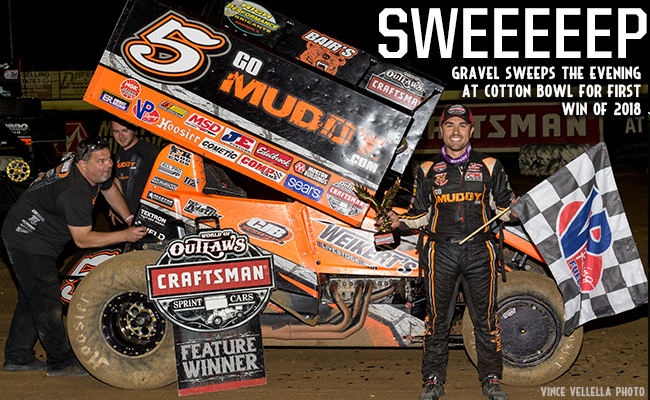 PAIGE, TX – April 26, 2018 – After being rained out twice earlier in the year at the facility, but the World of Outlaws Craftsman Sprint Car Series finally completed the event at Cotton Bowl Speedway. David Gravel and the CJB Motorsports No.5 team swept the entire evening en route to picking up his first win of the 2018 season. Brad Sweet and Jason Johnson completed the podium.

David Gravel started off his clean sweep of the program by setting fast time over the field with a lap of 13.832. Gravel went on to win his Heat Race and the Craftsman Club Dash to earn the pole for the 35-lap Feature.

An opening lap Red Flag for Clyde Knipp, who slightly rolled over in turn one, reset the field. Gravel led the field down the frontstretch once again and began expanding his lead.

Brad Sweet cut the gap to less than a car-length with seven laps, giving flashbacks to Cotton Bowl fans that attended the World of Outlaws race at the facility in 2016, that saw Sweet steal the victory in thrilling fashion that night. It was not meant to be for Sweet tonight as Gravel powered by two lapped cars to seal his first victory of the season and a clean sweep on the evening.

“This is what this team deserves. I’ve got to thank Barry, Derek, Zach and everyone that worked on this car to make it go fast,” Gravel said. “We’ve been running decently, just not getting into Dashes. Track position was huge tonight. The track was really heavy and got faster all night. Going green-to-checkered was a little tiring,” the Watertown, CT native added.

When asked about Sweet pulling within striking distance, Gravel said, “I heard him. Turn three and four were so tricky tonight. It was a long overdue first win of the year. Hopefully we can pick up from last year and get going” Gravel, an 18-time winner a year ago, crossed the line 1.453 seconds ahead of Sweet for the 35th win of his career.

Sweet was pleased with his second-place effort, “The lapped cars were so tricky. We had a shot there, but David did a great job getting by those last few lapped cars. We’ll move on to Devil’s Bowl the next two nights and try and pick up a victory.”

Jason Johnson made some daring moves early in the event to move into third and secure the podium finish. The Eunice, LA native acknowledged his previous racing career around this region and how great it is to come back with the World of Outlaws before thanking the fans for coming out on a Thursday evening.

Cory Eliason continued his strong start to the season with a fourth-place finish with Daryn Pittman completing the top-five. Nine-time Series Champion and current points leader Donny Schatz suffered from a rare mechanical issue as his Tony Stewart Racing No.15 visibly battled an ailing front end as he limped to a ninth-place finish. The World of Outlaws Craftsman Sprint Car Series returns to action at its birthplace, Devil’s Bowl Speedway, Friday and Saturday for the Series 40th Anniversary Celebration! If you can’t make it to the track, be sure to watch all the action LIVE on DIRTVision.com!