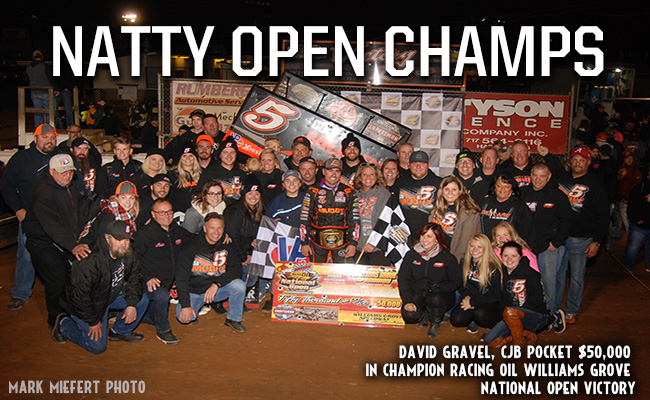 MECHANICSBURG, PA – September 30, 2017 – David Gravel passed Donny Schatz for the lead on lap six and went on to capture his 16th win of the season aboard the CJB Motorsports entry. It was Gravel’s second career Champion Racing Oil National Open win at Williams Grove worth $50,000. Schatz and James McFadden completed the podium.

David Gravel was second in National Open event points, lining him up second in the Craftsman Club Dash. Gravel went on to win the event, lining him up on the pole of the $50,000 to win, 40-lap Feature.

Donny Schatz got the jump on the initial start and led the first five laps before Gravel took the lead on the front stretch, leading lap six. Friday night’s winner, James McFadden worked by Schatz on lap 18 just before the yellow came out for a slowing Brian Montieth.

On the ensuing double-file restart, Gravel opted for the top giving McFadden the bottom, a somewhat unexpected move.

“I made a mistake and gave McFadden the bottom, luckily I was able to get around him on the top in three and four,” a relieved Gravel said in Victory Lane.

McFadden hit the rubber off of turn two and took the lead down the backstretch and led lap 19, before Gravel powered back around the Australian the following lap. The next circuit Shane Stewart shredded a tire running sixth bringing out another yellow.

Schatz worked by McFadden on the restart and set his eyes on the CJB Motorsports No.5. A red flag on lap 28 for Jason Johnson, Kraig Kinser and Shane Stewart brought out an open red. All drivers were okay.

With the bottom being the preferred line around, Gravel was forced to slow his pace as he closed in on the back of the field. Schatz cut the lead down and was on Gravel’s bumper as they received the two to go signal. Before Schatz could make a move, the final yellow of the night flew for Brian Brown, who cut down a tire running in the top ten.

The caution gave Gravel an open track which secured the $50,000 payday for he and the CJB Motorsports No.5 team.

“It’s been a special year. I’m happy to solidify my place here with 3 wins at Williams Grove this season,” Gravel said. “I wish we could have raced a little more tonight, but I’ll take it.”

Schatz settled for second. “We hit traffic and needed to stay there if we wanted a chance to get back by for the lead. We’ll try and pick up some more wins this year and get that Championship,” the eight-time and defending and current Series point leader said.

McFadden wished he would have been more aggressive once taking the lead, but was nonetheless happy with his weekend. His finish was easily good enough to secure the National Open Rookie Award worth $2,250 thanks to BeerHill Gang TV.

The World of Outlaws Craftsman Sprint Car Series returns to action next Saturday October 7 at the Fulton Speedway in New York before returning to Central Pennsylvania the following weekend at the Port Royal Speedway.

Full Results from the Williams Grove National Open – September 30, 2017 are available on the World of Outlaws website under the results tab.