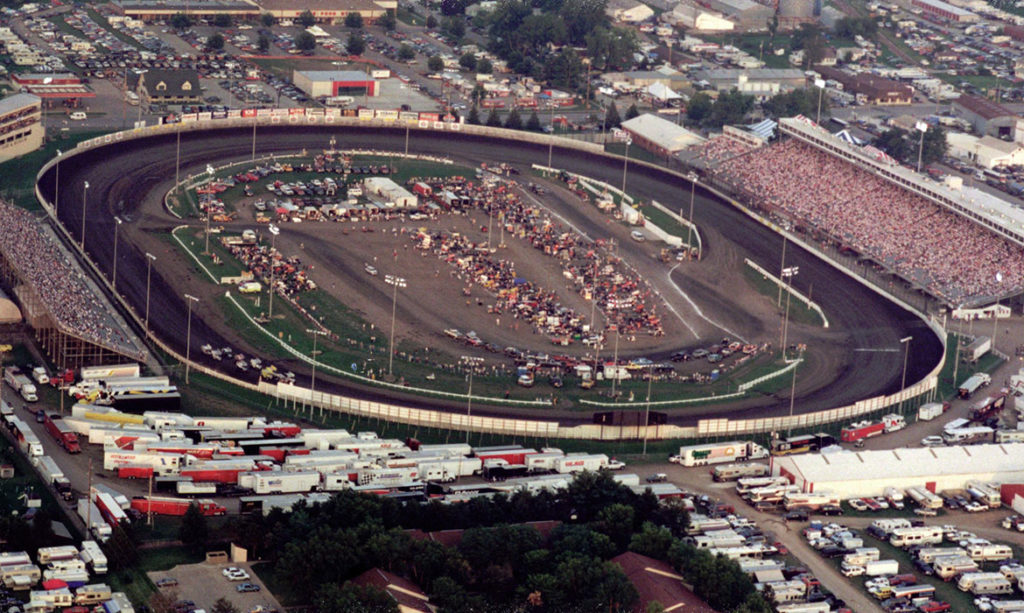 Knoxville Nationals is centerpiece of every season. For nearly six decades, the best in the world have converged on Marion County Fairground for one, two, three, four and in cases of rain or fog, five days and raucous nights. Yet in four decades of the World of Outlaws, only the final night of each Nationals has ever counted as a WoO win. Between 2005 and 2011, not even Saturday wore an official outlaw stamp.

Welcome to today’s topic: that uniquely World of Outlaws anomaly called the “split show.” By definition, it is invoked only on three or four-night events when groups are divided to separate qualifying nights. Two-night formats were only split in Devil’s Bowl. Knoxville Nationals has always been the best example and now, the only example. Gold Cup split fields until 2010 when car counts flipped Silver Dollar to standard two-night pay. Last nine Gold Cups stood alone, meaning no one transferred from one to another. In that sense, WoO preliminaries no longer exist except Nationals.

Split field preliminaries were part of Ted Johnson’s menu. In its fourth season, his World of Outlaws exceeded 100 races (102) but credited 72 wins. Why? Call it a business ploy. Ted never wanted 102 races in 102 towns. Such a pace can turn young racers old. His ideal would have been 50 two-night stops or better still, 33 three-nighters. Let his guys drop the trailer, get a room, get to know the local girls, move some merchandise, make more money.

Ramshackle raceways could scarcely afford his one-night purse. It took no business genius to see two nights as more expensive than one. How did Johnson package and market their greater financial demand? By allowing them to pay less money if they paid more in final feature. Tracks charged virtually the same ticket and pit pass even when winners made 800 bucks instead of 2k. Ted’s pitch said promoters made their money opening night so that second show was pure profit.

Such shell games were the caveat to get managerial fish to bite on two-night hooks. To the competitors, compensation came by way of transfer. Johnson essentially told Steve Kinser, Sammy Swindell and Doug Wolfgang, “Yes, your first night’s pay is insulting. But if you win, you start pole tomorrow when that win pays double. If you lose, no worries because these races award little or no points so they don’t really count.”

When the World of Outlaws was acquired by 2005 Boundless bunch that became World Racing Group, Ted Johnson had staged 2424 WoO races and discarded 514 as preliminaries or pointless shows.

Sale complete, Knoxville took wait-and-see approach to Boundless and National Sprint Tour by draping no banner on next six Nationals. Donny Schatz scored four unsanctioned Nationals bracketed by Kraig Kinser (2005) and Tim Shaffer in 2010. They cared little that no points came with their 150 Grand. To racers, none of that alters their task of whipping everyone in the house, eight to 80 regardless of distance or reward. Let the stat geeks split hairs about why Knoxville notched World Challenge simply because its winner made 10k.

Simple fix would just count all WoO nights as WoO wins. That however, is not altogether fair. Excluding the eternal Nationals debate about which night was tougher, three and four-night stops like Eldora Nationals or Florida Winter Nationals sometimes locked in Top Four, made everyone else go again on Night II, then rewarded Top Eight on Night III. Baylands split its field in ‘87 and but not 1988. Lanny Edwards loved to split fields. He booked the only two-night WoO shows that opened with twin features, neither of which counted. Edd French and Steve Perry beat Outlaws in his Devil’s Bowl but received no credit nor did Norman Martin, actual winner of the very first WoO race yet victim of protocol.

Pivotal in how the World of Outlaws conducted two-night business was U.S 131 Speedway in Martin, Michigan. Seldom used, Martin mowed grass with hot laps, tore deep holes and threw big rocks. Ted booked two nights in ‘83 and 1987. Return visit saw eight cars complete punishing prelim. Ted told teams that he cancelled Night II for their own safety. Of course, he neglected to tell U.S 131 promoters Gary Schlafer and Gerry Olson, who sued for breach of contract. In the aftermath, Johnson got Paramount to pay his one-night purse for racing in a quarry in return for future WoO dates with Olson at Hales Corners, Indianapolis, Terre Haute, Hartford and Davenport.

All future two-night contracts contained this same clause that stipulated if second night cancelled for any reason (rain or rocks) prelim pay was increased to one-night standard. This was a bold stroke. To tell a promoter who just lost the biggest show of the year to cough up some more money is akin to helping a man to his feet by kneeing him in the groin. Texas Ted held the hammer. He had “The Greatest Show On Dirt.” He knew it. Track operators knew it too, grumbled, then signed the agreement.

This safety net was as unpopular among promoters as it was popular in the pit area. To competitors, it was simple justice. They agreed to race for less on promise of more. If there was no more, why should they net less? Such soggy bottom weekends made official WoO wins of what were unofficial hours earlier. Prelim winners were teased that they had not truly beaten the World of Outlaws unless rain fell the next day.

Among races lost to rain, Jacksonville, Florida was unique. As the All Stars did later, World of Outlaws opened its 1983 season with two days on oiled dirt. Jeff Swindell won opener for Arizona’s Gil Suiter. Day II was slated for NBC-TV until drowned by coastal squall. Outlaws moved to Tampa and never returned. Officially, they never appeared at Jax Raceway and Jack Rich never won as WoO car builder.

Both wrongs were righted in 2018. WRG should be applauded for putting everyone on the same page. Full disclosure: I’ve been deeply involved in that project. For years, I implored Ted Johnson to green light such a task. He claimed early records were lost to Texas twister. When he closed on 500 WoO wins in 2004, I revealed Steve Kinser really was over 600. Ted turned deaf.

To summarize, you would not be reading these words on this website had WRG not chosen to correct history. It became apparent to them that Donny Schatz could not be hailed as surpassing Doug Wolfgang if 23 of Doug’s wins were excluded.

Some drivers waited decades for proper credit. And make no mistake, all hype aside, to join the list of those who have beaten the World of Outlaws is what most racers put at the very top of their resume. Only eight of 82 races in 1981 were won by someone besides Sammy, Steve or Doug. WoO wins are precious and few. As coach told Team USA hockey about rarity of scoring against Team Russia, “Save the puck.”

Correcting history had its way of tweaking first career wins. Kenny Jacobs first beat the World of Outlaws in preliminaries to 1986 Eldora Nationals, 1987 Western World and 1991 Knoxville Nationals. None counted until Topeka 1992. Once prelims were added, only Eldora counted for Kenny because Manzanita and Knoxville had split its field.

Shane Stewart’s case is similar. His first two WoO wins were prelims to Talladega and Devil’s Bowl in successive weeks of October 2001. Officially, he was still seeking his first Outlaw success when “Team 4am” won in Louisiana’s Thunder Valley. I can say with certainty that we celebrated as if Shane had just gained membership to an exclusive club.

Most of those victories paid more than World of Outlaws wins of their era. To say they don’t count is to oversimplify. Hopefully, the split-field phenomenon has now been simplified for you. Such prelims simply fall into separate box. Ted Johnson was correct that history never needs correction. Only our analysis does.