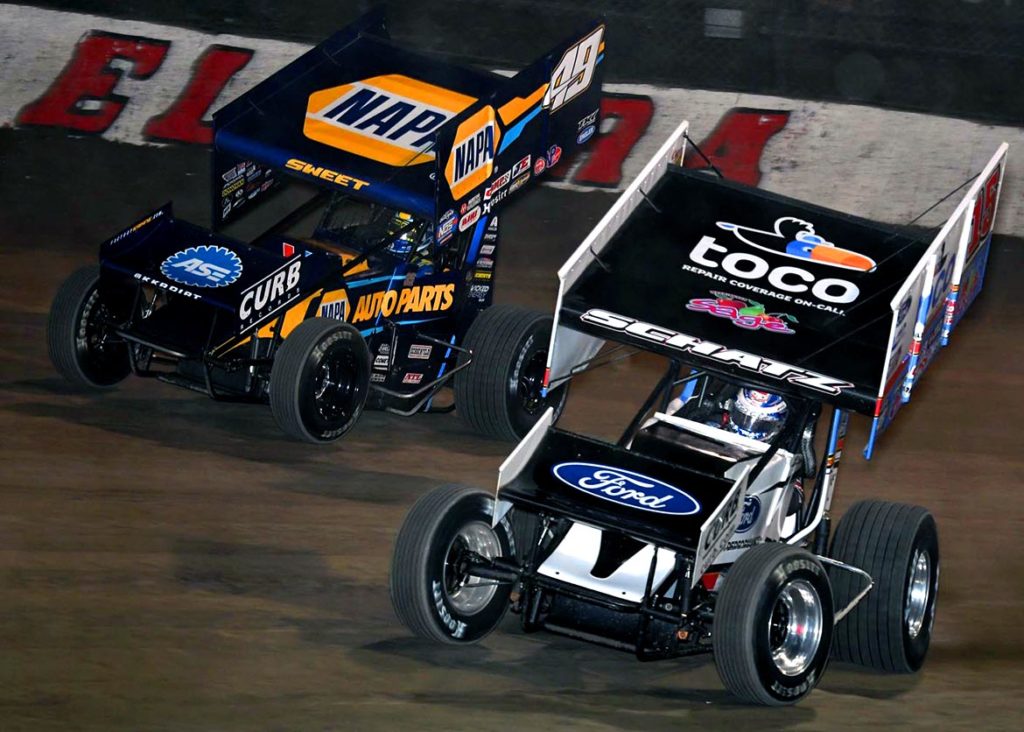 They’re going down to the wire. Like two thoroughbred horses rounding the clubhouse corner neck-and-neck, dominant Donny Schatz and never-been-champ Brad Sweet are taking the 2019 World of Outlaws title fight to a Can-Am World Finals photo-finish.

Such suspense is historically unusual. Schatz and Steve Kinser earned 30 collective crowns long before the final night of most seasons. This was bad business. Every sporting commissioner wants his championship decided in the final televised period, quarter, inning. Taking his cue from NASCAR (which devised The Chase when Matt Kenseth clinched too soon) Outlaw boss Ted Johnson dispensed provisional starting spots for nights when stars stumble (Richard Petty Rule) and decreased distance between finishing positions to keep standings tighter. Of course, no amount of free passes or creative mathematics could keep ten crowns from Schatz, the 2015 champ by a whopping 544 points. Prior to more modern accounting, Steve Kinser was 1980 king by a record 1200-point spread.

There have been cliffhangers among the wreckage. There was 2009 when Donny edged Jason Meyers by a mere 19 digits, then 2013 when Schatz surrendered to Daryn Pittman by 14, which led to reduced qualifying points. Those were the two closest title fights in World of Outlaws Sprint Car history. Daryn and Kasey Kahne Racing have interrupted what would be eight straight championships by the pride of North Dakota. The 2019 belt is Kahne’s to lose. So long as Bradley hits Top Five or Top Ten in North Carolina, KKR keeps the banner in Mooresville for the second time in seven seasons.

Next week will mark 13 straight autumns of the World of Outlaws capping points at The Dirt Track at Charlotte; two more than its previous home at Las Vegas Motor Speedway. The tightest title fight in the Nevada desert was in 2001 when Danny Lasoski edged Mark Kinser by 30, closer than 1998 when Steve kept Mark from the crown by 93 points or 1999 when Mark topped Lasoski by 71.

The World of Outlaws have closed 41 seasons on nine different venues. For almost three decades, Texas served as organizational headquarters and finished 1992-95 seasons in the Devil’s Bowl of Mesquite and long-gone North Texas Motor Speedway in Royse City. Memphis Motorsports Park hosted 1989-90 finales on its original half-mile and crudely-carved inner oval, neither of which still exist. Other tracks that felt the blade of urban renewal were legendary western theatres of Ascot Park and Manzanita, which closed 1986-88 World of Outlaws seasons. Outlaw curtain closers also spent three damp Octobers in Knoxville, Iowa where the weather was so miserable in 1984 that technically, there was no season finale just a split field and 10,000 puddles.

Ted Johnson’s first five seasons ended on Sunday afternoons at the Eldora Speedway of Earl Baltes. More than any one track operator, Baltes raised The Outlaws from hazy concept to international force by hosting one of every four races during its inaugural year, which he spiked with $5000-to-win in summer then an unprecedented Ten Grand. Shane Carson of Oklahoma only won three Outlaw races in his career but two were Eldora 10k. In his second season, Ted acquired Busch Beer sponsorship. Busch Clash at Daytona was a lucrative race for NASCAR Cup heroes who qualified quickest during the previous campaign. Busch Bash at Eldora followed the same criteria in a Saturday prelude paying 5k. Steve Kinser, Sammy Swindell and Doug Wolfgang were so fast that only Bobby Allen, Rick Ferkel and Bobby Marshall could join them in the 1981 Busch Bash. Ted and Earl quarreled in 1983 so Johnson shifted to Iowa then looked for a warmer spot.

When the World of Outlaws ended an 18-year absence of Ascot wings in September 1985, Agajanian Enterprises enjoyed such a one-night profit that Ascot expanded to a three-night Pacific Coast Nationals that ended the 1986 World of Outlaws campaign. Ascot’s proximity to L.A. glitz also began the practice of holding an awards banquet one evening after the series concluded. Long Beach was a long way in status and continent from the Florida saloon that staged Johnson’s first banquet before the ‘79 opener. Now it only made sense to pay point chasers at the end of the grueling trail rather than summon them later from all corners of the globe. Racers wholeheartedly agreed. They need point money to reduce engine bills before incurring new ones. And they need it yesterday.

Before there was a World of Outlaws to measure independent rovers, Pacific Coast Nationals at Ascot formed a mythical Triple Crown with Knoxville Nationals and Western World Championships at Manzanita Speedway in Phoenix, AZ. Most years, Phoenix was followed by Ascot but the reverse was true in 1987. It was the only time Outlaws closed at Manzanita and the only Western World that wrapped on an inner quarter-mile rather than infamous junkyard-hugging half. A year later, Western World launched the United Sprint Association thorn into Ted’s side, which caused Johnson to erase Manzanita from his next four seasons until live winter television made reluctant bedfellows of Ted and Phoenix promoter Keith Hall.

The King being The King, Steve Kinser captured the most Outlaw season finales beginning with three straight at Eldora then extending to Ascot, Manzanita, Mesquite, Vegas and Concord. Schatz and Swindell have each won six curtain closers. Sammy enjoyed the last laughs of 1990-91 when the Fram Dash paid princely sums of $65,000: highest of its era.

Donny Schatz and Tony Stewart Racing are the current “Muhammad Ali” of the World of Outlaws by knocking out all heavyweight challengers. Kasey Kahne Racing is no bantamweight. There are quality players at all positions. Back in 2006, TSR hired crew chief Rick Warner away from KKR. A decade later, KKR plucked Eric Prutzman from Warner and TSR. If all properly perform their jobs and one redheaded stallion gallops clear of trouble, Brad Sweet of Grass Valley, California can become just the tenth thoroughbred to ever wear the wreath as World of Outlaws champion.