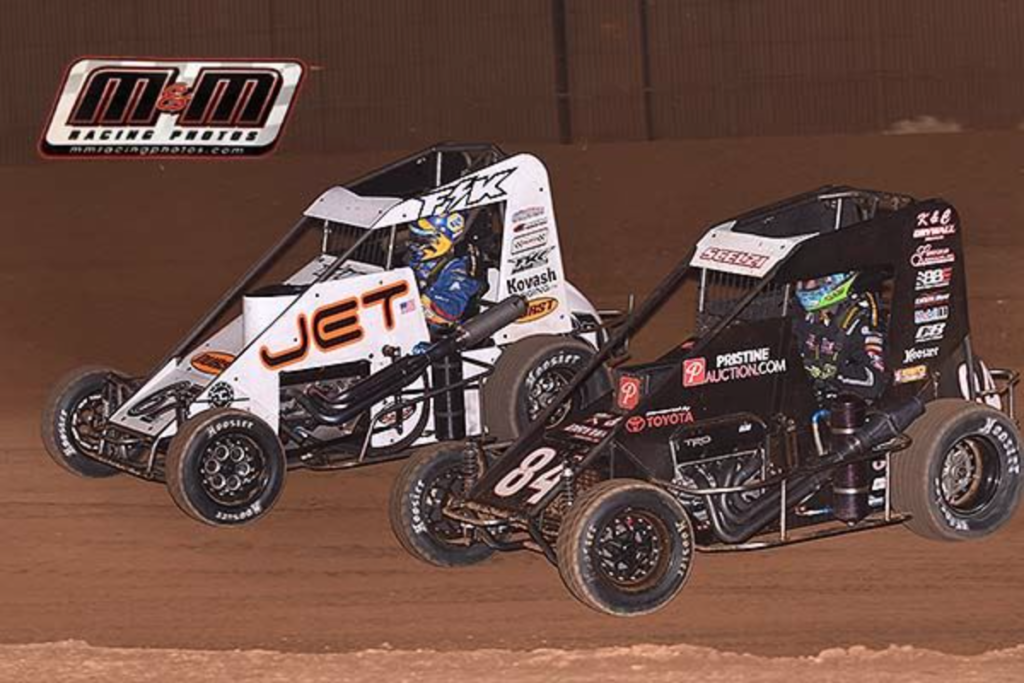 Outlaws can be grumpy bears. Three months between World Finals and Florida Speedweeks make them miserable. Some bears refuse to hibernate. They board flights to Australia or New Zealand to race all 12 months like Jason Johnson or Danny Smith did. Others try the Turkey Night Midget Grand Prix, a Southern California tradition for 79 years.

Carson Macedo, Giovanni Scelzi and Zeb Wise wasted no time. Five nights after Kyle Larson’s driver accepted Rookie of the Year honors at the 2019 World of Outlaws banquet, Carson climbed aboard Tommy Tarlton’s midget alongside Gio and Zeb. Fourth in Charlotte, Gio finished fifth at the Arizona Speedway then teamed with Christopher Bell and Aaron Reutzel on USAC Midgets backed by Billy Boat and Corey Tucker, former car chief of Roger Penske and partner to Bryan Clauson. Zeb had one of five entries filed by Tim Clauson and Richard Marshall, the Texan who brought Sheldon Haudenschild and NOS Energy Drink to the World of Outlaws.

Three nights and 800 miles after Apache Junction, USAC Midgets appeared in Placerville for the Hangtown 100 organized by Matt Wood, partner to Marshall on Placerville’s most recent World of Outlaws winner when Macedo lost to Shane Golobic. Shane and Carson were back with World Finals faces Reutzel, Spencer Bayston and Brad Sweet, the new champ who put the track back on the map with five Outlaw years. Brad’s midget belonged to Willie Kahne (FK Shocks) and Gary Zarounian, veteran of eight Turkey Nights with Sleepy Tripp. Also in Hangtown (frontier justice 1849) from NASCAR Miami were Bell and Ricky Stenhouse Jr. Rick owned a piece of Jason Johnson Racing before his Marshall merger. Hangtown 100 was an artistic success: 55 midgets over two frigid NorCal nights. Gio got the first feature; Larson bested Bell by eight seconds on a 12-second quarter. Three nights and 300 miles south, Kyle added midget honors from Bakersfield by beating Michael Pickens, the Kiwi who will welcome Larson, Bell and Zeb to New Zealand between Christmas and Chili Bowl.

Opperman won 44 features (40 sprint, four midget) in 1972 and Doug Wolfgang bettered Jan’s modern mark in 1977 when Doug was hired by Howard Linne, the 1959 Turkey Night winner with Tony Bettenhausen. Linne bolstered his 1978 holiday menu with Sammy Swindell, rookie to the previous Turkey Night. Rick Goudy ended 1978 with wins against the World of Outlaws at Chula Vista and USAC on Thanksgiving. Wolfgang was Jim Sullivan’s choice for Turkey Nights of ‘78 and 1980. Sullivan fielded Spectra Marine midgets that dominated Ascot’s quarter with Ron Rea, Patterson (‘79) and Buster Venard. Turkey Night 1981 saw Sullivan pair Preacher Patterson with disciple Steve Kinser even though the Hoosier had never raced midgets outside the Cincinnati Gardens.

Ken Schrader of St. Louis scored just one victory with the World of Outlaws. One of the most versatile drivers to ever grip a wheel, Schrader finished fourth and eighth on Turkey Night 1979-80 in Gene Hamilton’s midget while adding World of Outlaws winner from his local Tri-City Speedway to long resume. On the final day of the 1982 USAC campaign, Kenny borrowed Sheldon Kinser’s champ car to steal Shuman’s championship.

Brent Kaeding’s victory on Turkey Night 1985 was a bolt from the blue despite 21 sprint wins that season. Too slow for Turkey Night 1982, The Campbell Comet’s kid won the 1983 Danny Bingham Memorial at Bakersfield, ran a few winged 160 midgets at Kings Speedway and first teamed with Los Gatos Auto Body on Turkey Night 1984. Against the World of Outlaws, Kaeding Performance peaked second at San Jose and Baylands before winning the 1989 World of Outlaws opener and three of its next dozen.

Jeff Gordon’s best World of Outlaws finish was fourth at Bloomington in 1989 when he reached fifth on Turkey Night. Jeff’s unrivaled accomplishments include 22 winged sprint wins on dirt of Bloomington (7), Millstream (6), Haubstadt (3), Chillicothe (3), Lawrenceburg (2) and Florence, KY. Gary Stanton first brought Jeff to The Outlaws at Eldora and 1987 Nationals.

Ronnie Day of Salinas hit second on Turkey Night 1996 and second in Watsonville’s first World of Outlaws visit in 2000. He first met The Outlaws at Baylands in ‘84-85 and Ascot ‘86-87 but missed all of 1988 to heal his broken back. Ron and Don Berry began the 1991 World of Outlaws season third at El Centro and Bakersfield.

Everything changed at Copper Classic 2000 when Kasey climbed into one of three Performance Racing Industry Beasts as teammate to Dave Darland and Tony Stewart, who won. Driving sprint cars would never again be Kasey’s primary focus. USAC Midgets and Silver Crown did allow ample time for Kahne to capture 2002-03 Dirt Cups for Phil Durst and Dennis Roth and drive Roth’s car to fourth in Las Vegas: highest career result as World of Outlaws driver.

As car owner Kasey Kahne Racing is remarkable. The shop first fielded Jeff Shepard (2004) and Jesse Hockett before seven seasons and 62 WoO wins with Joey Saldana. KKR added Craig Dollansky in 2009 then started 2010 with Saldana, Sweet and Cody Darrah, who was injured and replaced by Paul McMahan. They opened 2011-12 with Joey, Brad and Cody. Charlotte saw KKR sweep four of the first seven when the boss came to play. Drivers for 2013-15 were Sweet, Darrah and Daryn Pittman, who emerged as 2013 champ. Kasey began 2019 with seven World of Outlaws starts then crashed at Williams Grove and surrendered his seat to James McFadden, the aggressive Aussie who placed KKR second in Charlotte and eighth at Nationals.

As driver Kasey Kahne could not quite climb Turkey Night’s top step. Three times on Irwindale asphalt, he settled for second. Sweet did eight Turkey Nights for the Kahnes: four at Irwindale (sixth was best) and four at Perris topped by second in 2013.

No one was happier than Keith Kunz when J.C Agajanian’s famous Turkey Night Midget Grand Prix returned to earth. Since the surface change, Kunz has swept six of seven. KKM smiled with Larson in 2012; swept four of the Top Six in 2014 when Bell first won; had three of the Top Five in 2015 when Thorson triumphed; stuck seven midgets in the Ventura 100 of 2016 when Kyle captured his second trophy; fielded four of the Top Eight in 2017; and shipped nine cars to Turkey Night 2018 when Bell beat Larson for the second straight November.

Bell and Larson have left the nest. Last month, Bell unveiled his own sprint car that topped All Stars at Fremont and Outlaws at Haubstadt. Second at Placerville proved Billy Boat’s team as stout. Can anyone be criticized for losing to Larson? He gave sprint car chief Paul Silva an active role on their new King chassis and it won two USAC Midget mains in four days. Kyle and Chris have combined to defeat the World of Outlaws on 15 nights since 2011. They have turned Turkey Night into their own private game of Ventura Beach volleyball. Jan Opperman and Gary Patterson would celebrate this generation’s ability to parlay NASCAR schedule breaks into big bites of turkey. Save me the gizzards.