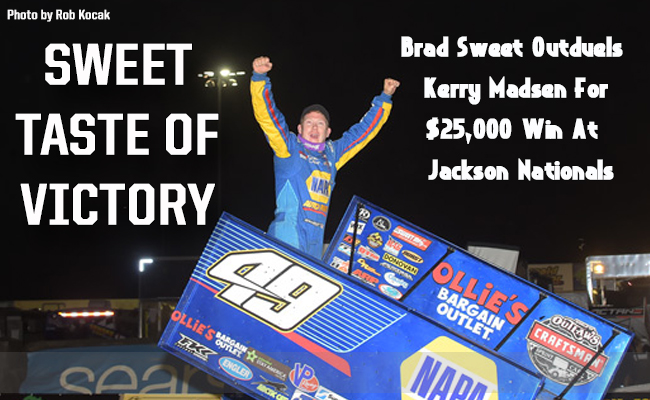 Scores $25,000 With Victory at the 39th annual AGCO Jackson Nationals

JACKSON, MN. – June 3, 2017 – Brad Sweet looked at the first two nights of the 39th annual AGCO Jackson Nationals for the World of Outlaws Craftsman® Sprint Car Series at Jackson Motorplex as battles that would ultimately put him in position to win the war. He did exactly that on Saturday night to the tune of $25,000, adding his name to the illustrious list of past winners of the tradition-laden event.

For Sweet, it was his third win of the season and second on a half-mile. Sweet now has 23 career World of Outlaws Feature wins, which ties him for 19th on the Series’ all-time win list with fellow competitors David Gravel and Shane Stewart, who also both finished in the top-five on Saturday night.

“It feels awesome to win the Jackson Nationals,” said Sweet. “We’re just ecstatic. I can’t thank Tod Quiring and all the guys enough for taking a chance and putting on a three-day show that pays big money like this. It’s a breath of fresh air and great to race for that kind of money. Hopefully the fans saw a good show.”

Sweet lined up second for the 30-lap main event and challenged pole sitter Kerry Madsen in the early going. Sweet hung with Madsen for a number of laps, especially in lapped traffic, mainly while working the bottom lane of the track.

Just before the halfway point of the race, Donny Schatz got by Sweet for second, with the latter getting back by a couple of laps later. Sweet took the lead from Kerry Madsen on the back straightaway on lap 18 and led the remainder of the race. He did have to withstand a pair of restarts with 11 laps remaining. The first was a double-file restart and the second single-file. Strong restarts each time propelled him to a solid lead over Madsen.

“I was in attack mode the whole time,” noted Sweet. “I was a little frustrated with myself. When I got behind Kerry (Madsen) I made a few mistakes and let Donny (Schatz) get by me. Usually you don’t get that back. Then I was able to get by both of them. Once I was able to get in control of the race, I knew I was in good shape and just tried not to screw it up. I almost messed up a few times and didn’t know how big of a lead we had, but I drove as hard I could those last 11 laps.”

Madsen, who finished no worse than second on any of the three nights of the 39th Annual AGCO Jackson Nationals led the first 17 laps from the pole. Lapped traffic ended up being his Achille’s heel, as Sweet got by him in traffic for the lead. Late in the race, Madsen was able to close back in on Sweet, using the top side of the half-mile.

“There were some classless people getting lapped and trying to take the leader out when they were getting lapped, but that’s no excuse,” said Madsen. “Brad (Sweet) probably deserved to win. We had a great car all weekend and to finish second, first and second is great. I’m really proud of the guys and the AGCO/Go Muddy car was a rocketship all week.”

David Gravel won a heat race on Saturday night to earn a spot in the Craftsman Club Dash, where he finished eighth. Lining up on the outside of the fourth row for the main event, Gravel steadily worked his way to the front. Gravel took third at one point from Donny Schatz, only to have the caution flag fly before that lap was completed. He would again get by the eight-time and defending series champion to come home on the podium.

“It was good to end the weekend on the right note,” said Gravel. “We kind of struggled all weekend and it took us a while to get the hang of it, but we got there. We’re happy to finish on the podium. You want to win this race, but we dug ourselves a bit of a hole there. Third was the best we could do. The track was really fast and we needed lapped traffic and was just about to get to it at the end. Good job to Brad (Sweet) and Kerry (Madsen). They had the fastest cars all weekend and deserved to be up here.”

The World of Outlaws Craftsman Sprint Car Series will next be in action on Friday, June 9 and Saturday, June 10 at Iowa’s famed Knoxville Raceway.

To see full results from night three of the Jackson Nationals, visit the results page.