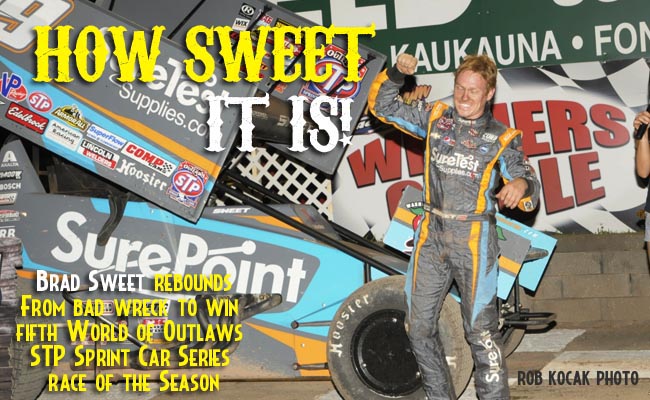 “It feels pretty unbelievable,” Sweet said. “These guys never give up. They worked all night long – they still haven’t slept from last night. I was in the hospital at 6 a.m. getting X-rays and I didn’t even know if I was going to be able to race tonight. So to come out here and get the win is just unbelievable.”

Just 24 hours earlier at Burlington, Iowa’s 34 Raceway, Sweet was racing alongside Terry McCarl, when contact between the two sent Sweet into and then on top of the turn three wall. After hitting an object, the car sheared in two.

“We got a run on the outside and I think [McCarl] just decided, he had been running the bottom, that he was moving to the top and it’s just one of those racing deals,” Sweet said in an interview Saturday afternoon. “Normally, it probably wouldn’t have been too bad of a crash – it would have knocked the front end out or whatever, but just kind of a freak accident. Just lucky everything held up and we are able to race again tonight.”

With the exception of an injured ankle, Sweet was able to walk away from the accident. He said he was unsure how that ankle would affect him in the race car.

“I kind of thought we would come here and just coast around and try to collect some points and try to heal,” Sweet said later in victory lane. “But [my team] gave me such a good car, I got battling for the lead – I think adrenaline took over. My ankle is pretty sore but this is always good medicine, winning.”

After starting in the third position on Saturday night, Sweet, in his SurePoint Medical/SureTest Supplies car, battled polesitter Bill Balog, his Kasey Kahne Racing teammate Cody Darrah and Joey Saldana. Sweet fell back to fourth when the green flag flew. After getting around Saldana for third, Sweet took the second place position on lap 20. On lap 24 he got his opportunity to get around the leader, Balog, on the backstretch heading into turn three. After taking over the top spot, Sweet held on to it through cautions and lapped traffic. He ultimately led 17 of 40 laps.

“We can tear up a race car and come back the next night with a car that’s even better – that says a lot about our team,” Sweet said.

This was Sweet’s fifth win of the season and the seventh of his World of Outlaws STP Sprint Car Series career. He is currently sixth in the championship standings, 300 points out of the lead.

In front of a packed Beaver Dam Raceway, Balog and Darrah led the field to the green flag. Balog jumped out to an early lead with Darrah in second and Joey Saldana in third. As Saldana and Sweet battled for the third position, Darrah set his sights on Balog. On lap 14, Darrah made a pass in turn two and took over the lead as the cars hit the backstretch.

Saldana brought out a caution on lap 15 after spinning in between turns three and four. This moved Sweet into the third position as Donny Schatz closed in.

Balog found his way back around Darrah on lap 18 – a position he would keep until Sweet caught him on lap 24. After a bad restart on lap 28, Balog fell back, giving way to Schatz and Daryn Pittman who looked to reel in Darrah and Sweet. Darrah had one last chance to get around Sweet as the two encountered lapped traffic with four to go. Sweet however was able to successfully maneuver through the traffic and ultimately take the win. Darrah finished in second, Schatz in third and Pittman in fourth.

“I felt confident that we had a car that was good enough to win here tonight,” said Darrah, who led four laps in his Ollie’s Bargain Outlet car. “And then the restarts, I kept getting a stumble off of four and the first time I got enough position on the 17 to get by him. The second time I knew I was slow I cheated the corner figuring he was to the top but he was lower than I was and he got back in front of us. I jumped the curb and let Brad by us. Awesome job for Brad Sweet to come back from a night like last night.”

Darrah said second place was not the finish he wanted for his team, but that they would take it.

Schatz, who started in the fifth position in his STP/Armor All car, said the racetrack provided a challenge as the lines changed throughout the night.

“We had a good balanced car throughout the whole race,” Schatz said. “We probably needed a bit more lapped traffic but we just didn’t quite get it there. Brad got through there really good, Cody did. We did the best we could, third was it tonight.”

Cedar Lake Speedway in New Richmond, Wis. hosts the World of Outlaws STP Sprint Car Series on Sunday evening. After a stop at Huset’s Speedway on Wednesday, July 2, the Outlaws travel south to Dodge City Raceway Park for the Boothill Showdown presented by Roto-Mix on July 4 and 5.

BEAVER DAM RACEWAY NOTES: Joey Saldana scored his 15th quick time of the season… Sweet and Saldana both have five wins on the season… The Kasey Kahne Racing cars finished tonight’s A main in first, second and fourth… Bill Balog started from the pole in the A main, one night after he scored his best ever World of Outlaws STP Sprint Car Series finish.