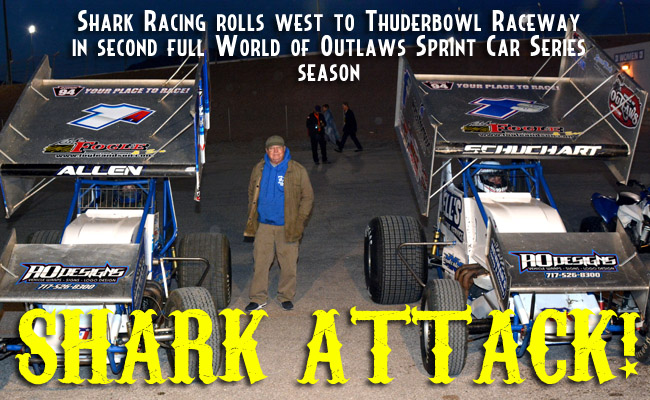 At A Glance: Shark Racing Heads West in Second World of Outlaws Season

TULARE, Calif. – March 11, 2015 – This time last year, Shark Racing had its fair share of doubters. Could the team make it west? If it could, could it make it the full season?

“We knew that there were people who were going to doubt us,” said Schuchart, who stunned Thunderbowl Raceway fans last year by grabbing a pole one night and a runner-up finish to Rico Abreu the next. “There are always going to be people who are going to doubt us… You just do what feels right and go out and do your best.”

Last season the team persevered and grew along the way. Schuchart scored one quick time and three podium finishes among five top-five finishes and Allen took his first ever heat race win and made his first dash appearance.

“To come out here for the second time in the beginning of the year for the long west coast swing is exciting for me because I learned a lot from last year,” Allen said. “You go back and feel confident because you have the experience with the Outlaws. It’s exciting and I think we’re a lot more prepared. We’re a lot more mature as drivers and mechanics and more aware of what to expect.”

Both drivers said that experience and all of the things that come with it provide a huge confidence booster for the season. Knowing the tracks and having the notes gives them a good foundation instead of starting from scratch night after night, Schuchart said.

“As a driver and a mechanic that works on my own car, you know why certain things do certain things like weight and shocks and tires,” Allen said. “Why people do different things at different tracks or different surfaces. With these guys you’ve really got to be on your game at all times. The track’s adapting, drivers know where to go when the track changes at that lap or that time. They know what to do when they come back in and where to go with things. We want to get to that point so we’re on the ball – just right there on the ball and adapt with those guys.”

This weekend’s event at Thunderbowl Raceway in Tulare, Calif. was a particular high point for Schuchart last season. The 22-year-old driver led 22 laps over the two nights and scored ninth and second place finishes.

“I felt like since we were pretty good last year, we put together two good nights and we were never there before,” Schuchart said. “We have notes to go off of. We kind of saw two different race tracks and we were kind of good on both of them.”

“They’re definitely different types of race tracks out in California,” Schuchart said. “But Tulare is probably my favorite just because of how we ran last year. I like small tracks because you have to get up on the wheel. It’s more of a driver’s track. Bigger tracks are more about cars and motor and smaller tracks are more about driver so I think they’re more fun for me.”

Allen agreed, saying he looked forward to Thunderbowl and Silver Dollar Speedway in particular during this California swing.

Coming into the season the team brings the momentum of experience and renewed support from sponsors. The team has a new fleet of chassis from Triple X Race Co. and engines from Don Ott Racing Engines.

“We’re getting really nice equipment. It just shows that people really have faith in us and care a lot about us and see that we have the passion and are willing to work for it,” Allen said. “They’re giving us a lot of really nice things and hopefully we’ll go out here and perform well enough that it makes them proud, makes them happy doing that for us the last couple of years.”

ABOUT THE TRACK
THUNDERBOWL RACEWAY is a high-banked, third-mile oval. The track record of 12.651 seconds was established by Tim Kaeding on March 5, 2010.For more information, visit http://woosprint.com/thunderbowl-raceway.

WATCH AND LISTEN LIVE: Watch and listen live to the World of Outlaws Sprint Car Series event at Thunderbowl Raceway on http://www.DIRTVision.com.

UP NEXT: The World of Outlaws Sprint Car Series continues its swing through the West Coast at Stockton (Calif.) Dirt Track for the FVP Western Sprint Shootout on March 21 and 22.