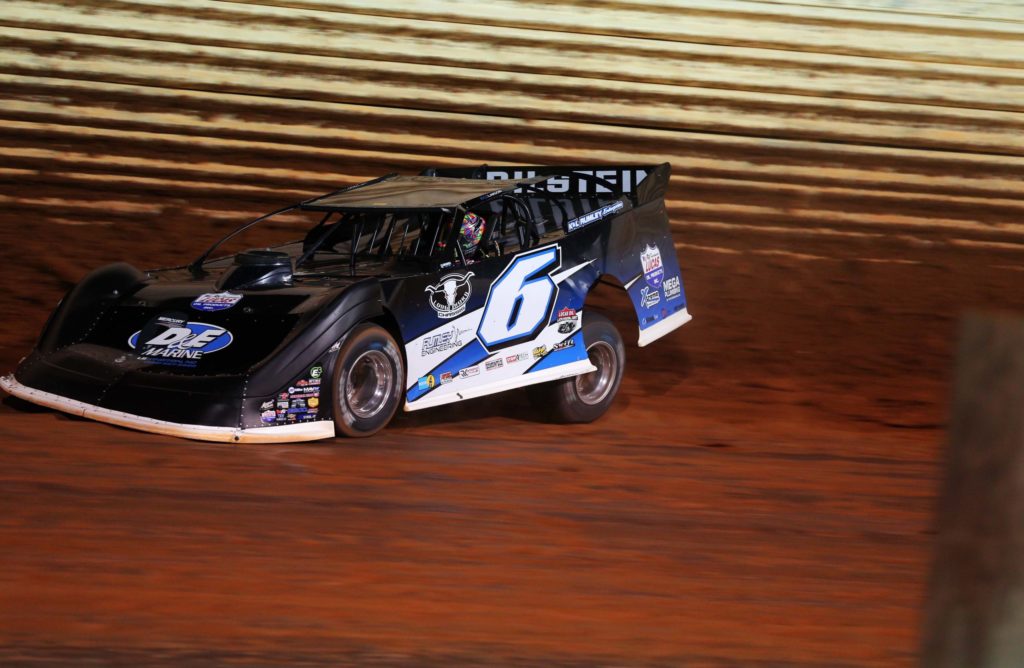 The Dirt Racing Sensation, with 42 wins in 2020, will pull double duty at The Dirt Track at Charlotte next week

All Dirt Roads Lead to Charlotte, even for Kyle Larson.

The Elk Grove, Calif. native, a winner of 42 features in 84 starts this year, will write the next chapter of his magical season next week when he makes his debut with the World of Outlaws Morton Buildings Late Model Series at The Dirt Track at Charlotte.

Pulling double duty at Last Call, the 28-year old nicknamed “Yung Money” will hit the 4/10th-mile oval for four consecutive nights of racing, all of which can be seen LIVE with the DIRTVision Fast Pass.

He’ll go head-to-head with The Most Powerful Late Models on the Planet for the first time in his career on Wednesday & Thursday, November 4-5 aboard the K&L Rumley Enterprises No. 6 Longhorn Chassis, before re-joining the World of Outlaws NOS Energy Drink Sprint Car Series on Friday & Saturday, November 6-7 in his Paul Silva owned No. 57 entry.

While next week will mark Larson’s first attempt with the World of Outlaws Late Models, he’s not entirely green to the discipline, while still admitting he’s got tons left to learn.

In August, he stunned the nation with his spectacular dirt late model debut with the Lucas Oil Late Models at Port Royal (Pa.) Speedway. Following a fifth-place outing on night one, Larson ensued to outdrive them all in the finale, beating soon-to-be World of Outlaws champion Brandon Sheppard to the checkered flag in his second career start.

“The Late Model has been a fun challenge,” Larson noted. “It’s so much of a different feel than anything I’ve ever driven before. They have a lot of grip, until they don’t and that’s when they become a struggle. I still don’t feel comfortable at all in them. I know I’ve still got a ton left to learn and figure out.”

On top of his natural ability, which he’s shown being successful in Sprint Cars, Midgets, Silver Crown, and now Late Models, the six-time NASCAR Cup Series winner has the added advantage of Kevin & Lee Roy Rumley in his corner.

With Lee Roy, an iconic owner involved in motorsports since 1956, and son Kevin, a UNC-Charlotte Mechanical Engineering graduate, Larson walked into the perfect situation. Kevin, the founder of Rumley Engineering, has most recently been known for his overwhelming success with stars Jonathan Davenport, Tim McCreadie, and Mike Marlar, along with his work at Longhorn Chassis.

From the very beginning, Rumley knew Larson was going to be special.

“I knew the first lap when we tested at Cherokee that he could go and out win,” Kevin noted on Larson’s potential. “He’s like the modern-day A.J. Foyt or Mario Andretti. I think he could probably win in anything he gets in.”

“I’ve enjoyed working with the Rumley’s a lot,” Larson said on his pairing with Kevin & Lee Roy. “The crew is full of great people and Kevin is just extremely smart. Being around him and listing to his ideas is really cool. Stepping back and trying to be a student again like talking to other drivers has been great too. Everyone has been really helpful honestly.

Bringing a 50% winning percentage into his foray against the World of Outlaws Late Models, Larson will look to up his already absurd numbers which include: 14 wins with All Stars Circuit of Champions, 12 wins with World of Outlaws Sprint Cars, four wins with USAC National Midgets, four wins at Pennsylvania Speedweek, two wins with USAC Silver Crown, two wins in local sprint car competition, two wins at the Chili Bowl Midget Nationals, and one win in New Zealand with the International Midgets.

To continue his stellar season, Larson will not only have to beat the likes of World of Outlaws stars like Brandon Sheppard, Scott Bloomquist, Ricky Weiss, Cade Dillard, Darrell Lanigan & Chase Junghans, but also the invaders coming to town such as Brandon Overton, Jimmy Owens, Tim McCreadie, Jonathan Davenport, Josh Richards, Chris Madden and more.

Just last week, Larson and Rumley, along with additional teams such as Rocket1 Racing and Team Zero, had the chance to go testing at The Dirt Track at Charlotte and pad their notebook heading into the season-ending Last Call.

“I’m excited to get to racing at Charlotte after getting some test laps,” Larson stated. “I think if we can qualify well we can have a good couple of nights, that will be the key.”