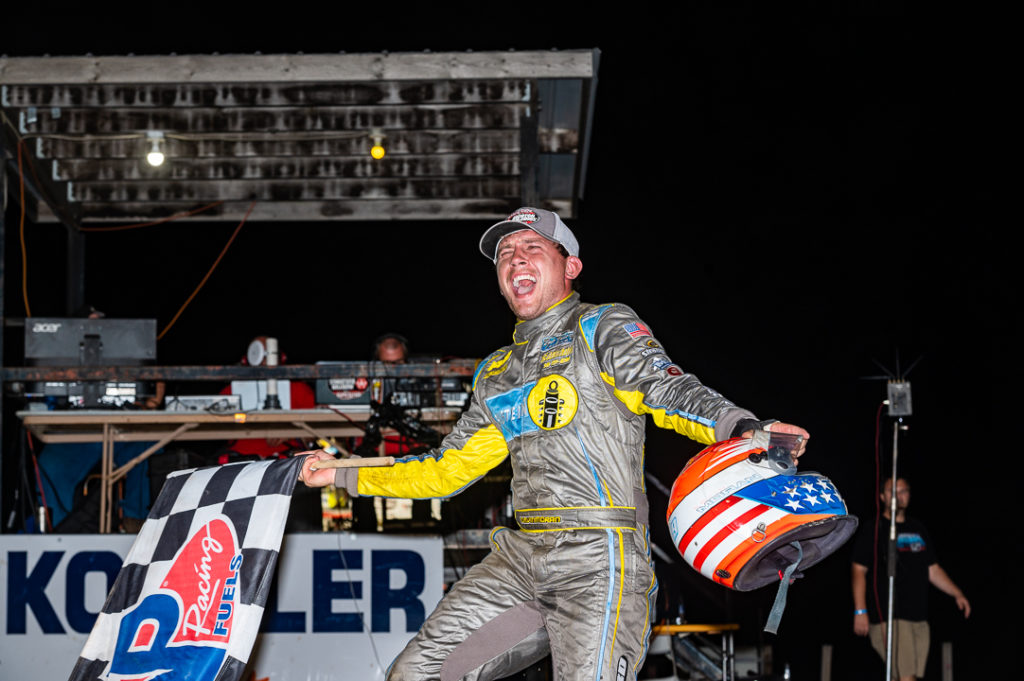 The Dresden, OH driver survived several restarts against his competitors, and overcame power steering issues to score the $30,000 Victory in the Quad Cities 150 presented by Hoker Trucking.

In the first few laps, Moran traded the lead with reigning Series champion Brandon Sheppard but took the lead for good on Lap 6. While the “Mailman” was cruising out front, his power steering started going away, forcing him to battle the steering wheel through every corner.

“[The Power Steering] slowly got worse and worse and worse as the race went on, and like under caution, I had no power steering,” Moran said. “My arms felt like noodles, and I’m not the biggest guy in the world anyways, but I just told myself on that last caution, don’t be a sissy, get out there and do what I need to do, and that’s what I did.”

Moran’s win is his fourth World of Outlaws triumph of the season and eighth of his career. He added $43,500 to his bank account this weekend, between two wins and a third-place finish.

The “Mailman” dealt with challenges from a familiar foe for part of the race, as Bobby Pierce tried to steal the lead from him on one occasion. Moran held him at bay after searching for the best line on the speedway.

“The middle was really really good for most of the race, and then when [Bobby Pierce] slid me, and when I slid him back in one and two, I felt like the slider line was actually like really fast,” Moran said. “When I did that [Wylie Moran, his crew chief], hands got wider, and we trucked on from there.”

While Moran led most of the race, the rest traded positions throughout all 70 laps.

Brian Shirley, the race’s hard charger, drove his way to second after starting 15th. The Chatham, IL driver, stated his car was fast and took advantage of some breaks along the way.

“I wasn’t sure how it was going to turn out, to be honest, we just needed a good run, and a lot of things were falling our way there,” Shirley said. “We had a good car and had a couple of breaks with the cautions happening and getting in the right spot. Luckily, we just capitalized on some good things that went on [Saturday].”

From Bear Lake, PA, Boom Briggs crossed the line third—his best World of Outlaws finish of 2021. The help he received from one of his competitors, paved the way to success on Saturday night.

“I got to thank Mark Richards and all of the [Rocket1 Racing Team],” Briggs said. “[Brandon Sheppard] welded on my car [Saturday], Mark helped me with some stuff and it got me in the game.

“That’s all I ever ask is I want in the game and to just be competitive.”

Sheppard finished fourth, his second top-five of the weekend. The New Berlin, IL driver ran second for most of the race, but lost his brakes around the halfway point.

“It didn’t affect me too bad around the halfway point, but the longer the race went, and the more I needed to slow my entry down a little bit, the worse I got,” Sheppard said. “I couldn’t steer in unless I was kind of on the gas because I needed to slow up with the brakes, and I didn’t have no brakes to slow me up.”

Bobby Pierce rounded out the top-five, dropping from second on the final restart after a fierce battle for the runner-up spot with Chris Madden.

Pierce was trying to pass Madden on the outside of Turn 3 with five laps to go, when Pierce made contact with Madden, sending the Gray Court, SC driver spinning on the inside of the track.

Pierce stated he was trying to get the most out of his car while running the cushion when the incident happened.

“Anyone that doesn’t know, racing these cars, you’re trying to get that best run off into the corner you can possibly get when you’re running the top,” Pierce said. “When there’s a guy constantly swinging out in front of your line, you’re trying to get to his quarter panel as close as you can without touching him or at least nicking him so you can at least get that best runoff because this game is about inches.

“I could’ve went in there and threw a slider and knocked his nose off. I didn’t want to do that; I wanted to pass him clean. So, therefore, racing deal, it sucks, I take accountability for it because I’m trying to get the most out of my racecar I possibly can.”

We reached out to Madden after the race about the incident, but he declined to comment.

Devin Moran overcame adversity to win for the second time in three days, despite leading more laps than anyone throughout the weekend. The “Mailman’s” perseverance shows it’ll take more than a minor issue to keep him out of Victory Lane, when his Longhorn Chassis is dialed in.

UP NEXT: The Most Powerful Late Models on the Planet return to Cherokee Speedway on Thursday, Sept. 2 for the rescheduled Rock Gault Memorial.