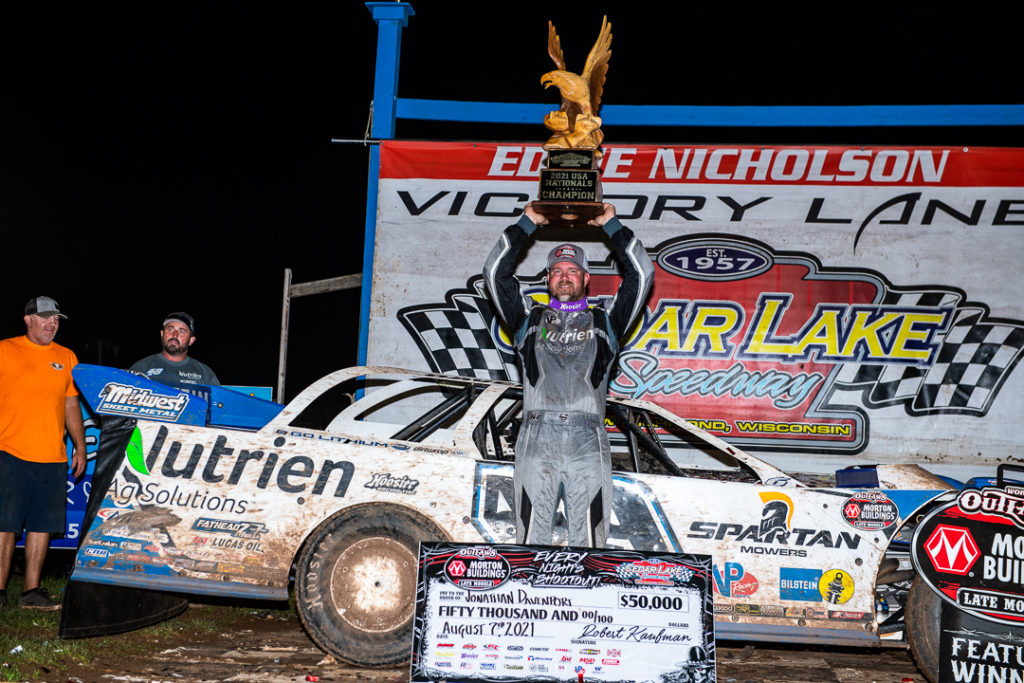 The Blairsville, GA driver found momentum on a Lap 89 restart, thundering to the bottom of the track, and muscling his way in front of Kyle Bronson to take the lead. From there, Davenport couldn’t be touched, claiming the $50,000 prize for a second time.

“Superman” stated he needed things to break the right way to make his move past Bronson.

“If I could ever get a half-assed run on [Bronson], I was going to try and go ahead and slide him,” Davenport said. “I knew I was just a little bit better off the cushion than he was, and he was pretty much married to it, and his quarter panel tore off.

“He did a hell of a job; I was just in the right place at the right time and just got to break his momentum.”

Bronson looked like the man to beat for most of the race, leading more than 80 Laps. He powered past Ashton Winger on the cushion on a Lap 3 and pulled away. The Brandon, FL driver led until that Lap 89 restart when Davenport got by. Soon after, things went south as Bronson jumped the cushion, ending his night early.

“It’s a mistake by my part, really, and it sucks, but that’s the way it goes,” Bronson said. “When [Davenport] got by me, I was just giving her all she got, and we pulled the left tire off the wheel.”

Davenport’s ascension toward the front showed off his ability to adapt from his 11th starting position. He picked off cars one by one before finally getting the shot at Bronson he needed to claim the victory.

“Depending on what car was in front of you was where you had to run,” Davenport said. “I was trying to be really patient through the middle of the race, and I didn’t know if I had that good of a car because there were times I couldn’t keep up with the guy in front of me.

“I stayed patient and just wanted to have the best tires at the end.”

Davenport wasn’t the only driver who was patient throughout the 100-lap Morton Buildings Feature. Brandon Overton methodically worked his way into second in the end, taking advantage as cars in front had either flat tires or damage.

“There was a lot of guys in front of us that wasn’t going to do too much giving,” Overton said. “I kind of hovered around between the seventh and 10th spot the whole time and never could really get going.

“I just kept my car from getting as beat up as I could, and nobody hit me in the front end, and I was just lucky to run second.”

The Senoia, GA driver faced some adversity on the way to a third-place finish.

“When I went to the top, I lost a mud cover, so the right rear was packed full of mud,” Winger said. “We were vibrating our teeth out for 80 laps, but the car was good, and I think Davenport definitely should’ve won; he was just a little better than me.”

Jason Feger passed more cars than anyone Saturday night, finishing fourth to earn the race’s hard charger. Feger, from Bloomington, IL, had one of the tallest mountains to climb after starting 23rd.

“We had some luck, and it takes that, and people broke and had flats and stuff like that,” Feger said. “Honestly, that’s the best the car’s felt all weekend.”

Three-time and defending Series champion Brandon Sheppard rounded out the top five. Like Winger, Sheppard also dealt with adversity, battling back from a right rear flat tire on Lap 74.

The New Berlin, IL campaigner got up to second before he felt the tire starting to go down.

Jonathan Davenport played his strategy to perfection for his eighth career World of Outlaws triumph. All “Superman” needed was a little patience to avoid problems that were his competitor’s kryptonite.

UP NEXT: The Most Powerful Late Models on the Planet return to action on Thursday, Aug. 19, at the Orange County Fair Speedway in Middletown, NY.