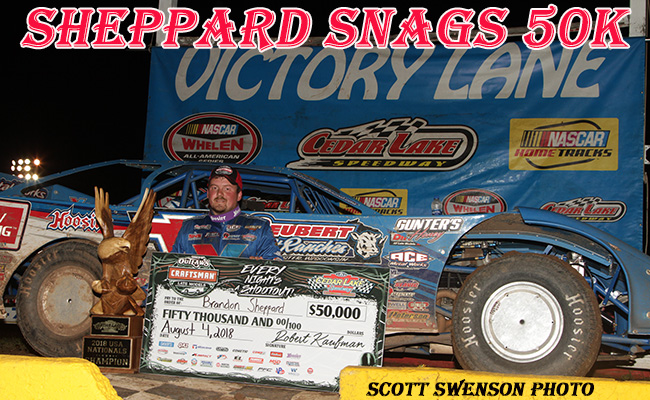 Second in a row, three out of the last four, 11th of the season & 35th of his Outlaws career

NEW RICHMOND, WI — Aug. 4, 2018 — The World of Outlaws Craftsman Late Model Series was the headliner for one of the most prestigious races in the country, the 31st annual USA Nationals. The fast 3/8-mile, high-banked dirt oval of Cedar Lake Speedway, located just across the Minnesota / Wisconsin state line and northeast of Minneapolis, MN in New Richmond, WI, was host to the 100-lap main event of the weekend. Defending Series Champion Brandon Sheppard took home the big payday, grabbing the lead away from Jimmy Owens on lap 23 and holding off Brian Shirley to pick up his second victory in a row, sweeping the weekend at Cedar Lake, his 11th Series Feature win of the season and 35th of his Outlaws career.

“This is definitely one of my top ones for sure,” said the as the New Berlin, IL standout. “We’ve been coming here for a lot of years trying to win this race. We’ve had a really good car a lot of times, but just fell short. To win it, this means the world to me. Mark Richards and Steve Baker have given me this opportunity to come drive this car, and it’s just a dream to drive.”

The elated 25-year-old was surrounded by his crew, family, friends and passer-by’s offering their congratulations on sweeping the weekend. “I have one heck of a crew that supports me 110%. My great sponsors, everybody involved in this whole deal, everyone on this thing that helps and supports me, it really does mean the world to me,” added the the driver of the #1 Valvoline / Rocket XR1 Chassis / Durham Racing Engines ride.

2017 Rookie of the Year and USA Nationals Dash Winner from the night before, Devin Moran started on the pole. Flanked by 2014 event winner Jimmy Owens, the two would bring the stellar 28-car field to the green flag to begin the century grind. Owens darted out ahead of Moran and the rest of the field while they positioned themselves behind the two leaders. Sheppard, who started behind Moran in third, slipped past the pole-sitter and quickly placed himself within striking distance of Owens.

As the leaders approached traffic, Sheppard went up to the top side and began building his momentum, riding the cushion around until he moved past Owens on lap 23 to take over the lead he would never relinquish. Brian Shirley, who recently won his second DIRTcar Summer Nationals Hell Tour Championship, had caught the two leaders and went by Owens right after Sheppard did and immediately began challenging Sheppard for the top spot. The two Prairie State stars waged war around the 3/8s-mile with Shirley pulling up even several times with Sheppard but could not quite complete the pass.

With the lap continuing to click off, Owens, who never fell off the podium the entire race, went back after Shirley and made the pass for second with 17 laps to go and reset his sights on Sheppard. Like Shirley, Owens tried several times to get past the race leader but would soon fall back into the clutches of Shirley who took back the runner-up spot with only three laps to go. Sheppard maintained the top spot throughout and, in the end, would cross under the checkered flags first to score the $50,000 payday. With the victory, his 11th of the season, Sheppard now has 35 career series triumphs to move him to within two of 2011 Series Champion Rick Eckert, who is fifth all-time with 37 wins.

“The job is getting done with Rocket XR1’s being in the top three tonight. It’s awesome, man. This is huge,” Sheppard continued. “Hopefully we can carry this on the rest of the year. We’ve had a really fast car all year long. We just had a lot of bad luck early on this season. Everything was just really good this weekend, even with the bad luck in one of the Heat Races last night. Maybe that was our bad luck for the weekend,” he ended.

Finishing a season high second in Outlaws competition, Brian Shirley gave Sheppard all he could handle throughout most of the race before finishing second in his #3s Bob Cullen Racing / Rocket XR1 Chassis / Durham Racing Engines ride. “We just didn’t get a good restart, and Jimmy (Owens) got back on the outside, but we were able to battle back and had a good car. Just can’t thank everybody behind us enough,” relayed the 37-year-old from Chatham, IL. “This XR1 Rocket ran great, and our Durham Racing Engine ran really well. Overall, just happy to get second in this one. We’ve been pretty fortunate that everybody at the blue rig has really taken care of us. Bob and Lisa Cullen give me the best equipment money can buy, and we just try and utilize it the best that we can and continue to have fun doing this,” he ended.

Scoring the final podium position finish in his #20 Ramirez Motorsports / Rocket XR1 Chassis / Durham Racing Engine entry was Newport, TN veteran Jimmy Owens. “We had a good car the whole race, but I was a little laid over on the right rear more than I wanted to be,” explained the 46-year-old veteran after the race. “We had the lead there and were setting a comfortable pace where I felt like I could run without messing things up. Well, Brandon (Sheppard) and Brian (Shirley) got passed me, and I thought, ‘I’m just going to sit here and bide my time and be cautious and things will fall my way,’ and sure enough they did. We had a good hot rod at the end, but just not enough to get it done,” he ended.

Within the finishing order, Rocket XR1 Chassis and Durham Racing Engines swept the podium finishers as Chase Junghans, also in a Rocket XR1, was impressive in finishing fourth while three-time DIRTcar Summer Nationals Hell Tour Champion, Bobby Pierce advanced 15 spots after starting 20th and having to transfer through one of the Last Chance Showdowns, to finish fifth. Mike Marlar was shown sixth while Shannon Babb was seventh. Former two-time USA Nationals winner (2005 & 2001) Dale McDowell scored the KSE Hard-Charger award with his 24th to eighth place run after getting in via the Last Chance Qualifier. Chris Simpson was ninth after starting 13th and the second Last Chance Showdown winner, 2014 rookie of the year, Frank Heckenast Jr., picked up eight spots from 18th to complete the top 10.

Earlier in the evening, Headingly, Manitoba’s, Ricky Weiss would collect a $2,900 payday for winning the FANS Fund Dash over Jason Feger, Dale McDowell, Pierce and 17-year-old Hudson O’Neal who completed the top five. In the two Last Chance Showdowns, it was Tyler Bruening and Heckenast Jr., scoring the wins while Feger, who ended up racing in four different events out of the five total, picked the victory in the Last Chance Qualifier.

The World of Outlaws Craftsman Late Model Series will wrap up their two-week road trip through the Midwest with a date at the 3/8-mile of Farley Speedway, located west of Dubuque in Farley, IA. The Hawkeye State oval will host the World of Outlaws for the first time in 13 years, and only the third time ever, on Monday, August 6th with a $10,000-to-win payday. Farley was one of the original tracks on the schedule during the first two years after the 2004 rebirth.

In the last Outlaws visit to Farley back in 2005, Rick Eckert, the last remaining member of the fabled Dirty Dozen who is still full-time with the Series today, went to Victory Lane. In the first-ever World of Outlaws race there back in 2004, Scott Bloomquist crossed the start/finish line first to score the win on his way to the Series Championship that season.

Tickets for the Monday, August 6th show at Farley are still available online.

TAKE FIVE: Sheppard holds on for fifth at “The Dream”

CROWN JEWEL CONFIDENCE: Weiss shines on night one at Eldora