Sheppard Makes it a Hat Trick at Volusia 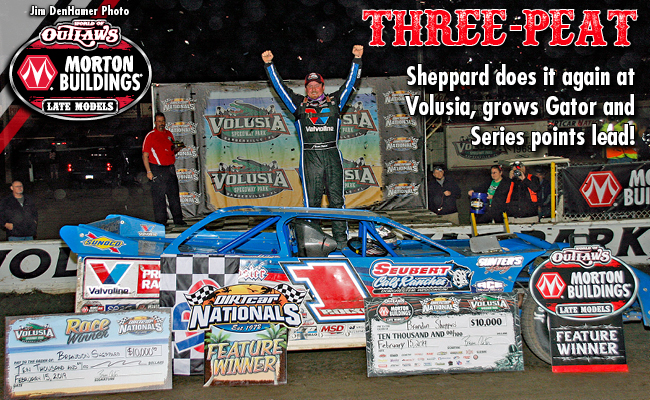 BARBERVILLE, FL — Fast fact: the last four World of Outlaws Morton Buildings Late Model Series races held at the Volusia Speedway Park as part of the DIRTcar Nationals have now been won by the same driver in the same car. “The Rocket Shepp” Brandon Sheppard put on yet another powerful display of motor and muscle on Friday night, as he led 41 of 50 laps en route to his third victory in three days. Sheppard won the fourth and final World of Outlaws race last year at Volusia, making this four in a row for the Rocket Chassis house car driver at “The World’s Fastest Half-Mile.”

After winning Monday’s DIRTcar Late Model race and two sub-par nights of World of Outlaws competition Wednesday and Thursday, 2018 Series Champion Mike Marlar put together an incredible rebound race, advancing 21 spots through 50 laps to go from 23rd to second after barely making the race through a Last Chance Showdown.

Sheppard began his night with a win in Heat No. 5 and drew the fourth spot on the starting grid. From the outside second row, he seemed to crack the whip at the exact same time as Thursday night, taking the lead away from Tim McCreadie on lap 10 and getting the jump on every restart, avoiding the destructive activity behind him to garner his 15th top-five finish in 17 overall starts this winter.

Track conditions, as they always do, changed throughout the evening, which made for an interesting challenge for the drivers on which line to run and when. Both high and low lanes seemed to be effective, and Sheppard said his car was good enough to work with both.

“I feel like I could have ran the same line most of the race and kept the same speed up, but there were guys coming behind me on the top and they were a little better than me at times, so I had to move up and compensate,” said Sheppard, of New Berlin, IL. “I just moved when I had to, and everything just worked out how it worked out – the racecar was really good.”

Sheppard, a third-generation racer, grew up on Illinois bullrings, but he’s adapted his game to big houses, as well.

“You can’t get good at these places unless you go and get beat and learn from your mistakes,” Sheppard said. “We’ve ran a lot of half-miles in the past few years and our half-mile program has been really, really good. I was definitely excited to come here, for sure. Of all the places that we come to in Florida, or speed weeks in general, I was definitely most excited about here.”

Dominance on this half-mile is certainly not easy to come by, but the Mark Richards Racing team certainly has figured it out, winning 10 World of Outlaws Feature events at the facility since 2007. Richards and his crew of Danny White, Austin Hargrove and Joel Rogers have worked especially hard to put Sheppard into victory lane numerous times over the past two seasons. And Richards couldn’t be happier to do it at a place like Volusia.

“This starts our year off, so it gives us some momentum to go on,” Richards said. “This place is probably one of my favorite places to race, so to come here and win, it means a lot to us.”

Sheppard said on Thursday night that the pressure of winning in 2019 was actually relieved a bit because they fell short of winning the Series championship in 2018. Richards wants the best for his team, and it seems they’re coming back with vengeance in their eyes to begin the year with three-peat victories to kick things off.

“It wasn’t because of on-track performance, it was because of some mechanical issues we had,” Richards said. “We had an incredible year, won the most races and all that. But we want to come back and redeem ourselves.”

However, little did Sheppard know of Marlar’s charge behind him. Lap by lap, Marlar began to pick off traffic in front of him, climbing to the 16th spot before a bad wreck on the front stretch on lap 27 brought out an extended caution, sending several cars to pit road. On that restart, Marlar put the hammer down and picked up a few more spots, placing him inside the top 10, where he continued to make up ground on the leaders. By lap 40, he was battling Brian Shirley for second – a battle he won at the drop of the checkered.

“It went great for me, there were a lot of things happening in that race,” said Marlar, of Winfield, TN. “I started, pretty much, at the rear and had a really good car. I missed some pretty big catastrophes and passed a lot of cars too, so it was a good night for us.”

Shirley once again proved his worthiness of running up front again on Friday night with a hard-fought, third-place run. He started eighth and kept his nose clean through 50 laps, holding his own in the top three to stay out of the incidents that were occurring behind him. Steadily, Shirley made the most of his passes on the high side – a familiar place for him this week.

“We got off to a pretty good start and was able to pick a few of those guys off,” said Shirley, of Chatham, IL. “Just stuck to my guns, as I was pretty good around the top. Luckily, everything went our way – got a couple spots on some restarts and it all worked out pretty good.”

Shirley had some early momentum that proved to be the difference-maker in staying out of each of the five cautions, climbing to second on lap 19, well before the wrecks involving Devin Moran, Tyler Erb, Ricky Weiss, Kyle Bronson, Chris Madden, Gregg Satterlee and Jonathan Davenport led to a lot of mangled racecars in the pits after 50 laps, and Shirley was just glad to be ahead of it all.

Don’t miss the 12th and final night of the 2018 DIRTcar Nationals from Volusia, get your Late Model Fast Pass now to watch every lap live on DIRTVision!