Sheppard Does it again at Duck River 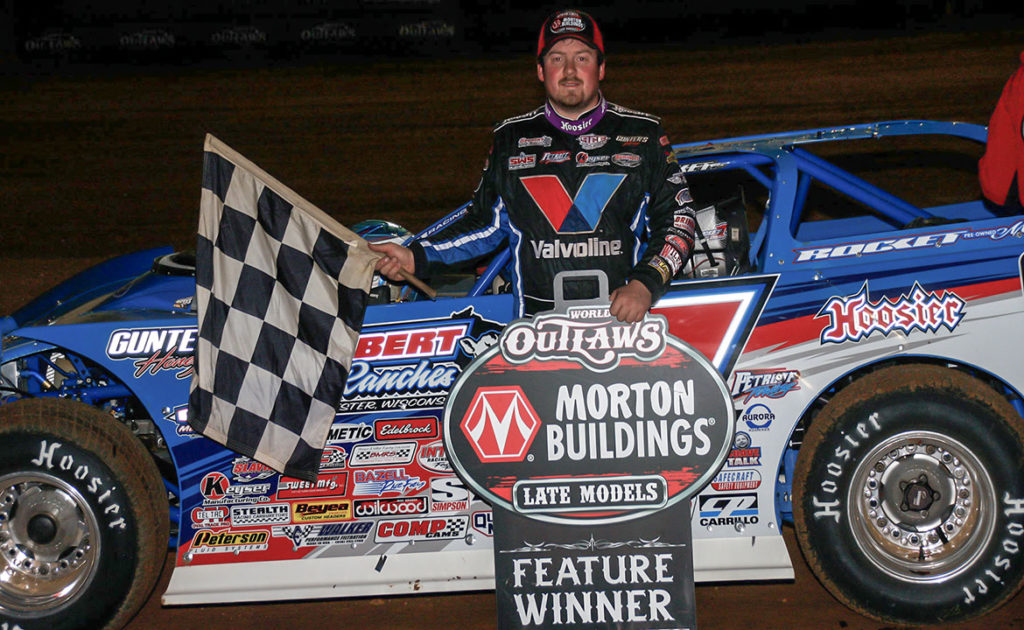 As has been the case on Sheppard’s ongoing quest of the Series’ all-time consecutive-win record, he was strong right out of the trailer. He captured Drydene Heat three in convincing fashion, setting him up for a third-place redraw. From inside row two, Sheppard pressured early leader Junghans before making a move for the lead on a restart just before the halfway point in the Feature.

Once out front, Sheppard never relinquished the lead despite Junghans doing everything he could over the final 10 laps to retake the top spot.

For Sheppard and the rest of the Rocket1 crew, it was just another day in the office as they set their sights on tying Darrell Lanigan’s all-time mark of six consecutive wins Saturday night at Smoky Mountain Speedway.

“Everything’s just been going our way and I’m just riding it out as long as I can,” said Sheppard, of New Berlin, Ill. “We all know it’s going to come to an end at some point, so we’re just going to keep digging, do the best we can, and do what we always do. Just work hard and hope for the best.”

A very stout field of 37 cars were in the house Friday night at Duck River to challenge the World of Outlaws stars, including a number of other nationally touring cars who had ideas on stealing the $10,000-to-win victory. Combined with a great track surface for three-lane racing, it all added up to mean every move on the track was critical, be it making a pass for position or holding off challengers. And Sheppard would agree.

“The competition level at all these races is so tough right now,” Sheppard said. “You’ve got to be able to qualify good and start up front in your heat race and get a first-few-rows starting spot for the Feature.”

Despite making the move for the lead with just over half of the race left, Sheppard said he was doing quite a bit of studying in his time behind Junghans to see what line would be the fastest once the pass was made. While Sheppard worked the bottom most of the Feature, he had to go to the top to get around Junghans.

“The only thing I’m sitting back there doing is trying to move around and change my line just the slightest bit, just to see where I could gain speed or lose speed on [Junghans],” Sheppard said. “Then he moved down there on that one lap, and the top was starting to get good right then, and I knew my car was good up there.”

In what was almost a perfect night for Junghans and his ShopQuik Racing team, earning the PFC Brakes Fast Time Award, winning his heat race and redrawing the pole, the team’s efforts earned them a runner-up finish and their fourth top-five in seven races, one less than he had all last season.

“Everyone’s getting along, we’re all gelling,” said Junghans, of Manhattan, Kan. “We’re just working hard. This is all we do. It’s a never-ending battle to try and find a bit of speed here and a bit of speed there. We’re going in the right direction and the finishes are showing.”

Junghans would have loved to hold on for the win, but knew finishing just .660 seconds behind someone who’s on such a hot streak is not anything to hang his head about.

“To run second to [the Rocket1 team’s] accomplishments, we just need to get a little bit better,” Junghans said. “We’ve been working hard since Florida and we’ll just try again tomorrow.”

Tanner English lurked inside the top-five for most of the 50 laps and was able to hold off Rookie of the Year points leader Ricky Weiss to complete the podium. Making his fourth appearance in a different car this season, this time in the Tommy Pope Construction #22, English said his car was a dream to drive against such stiff competition.

“The car was great,” said English, of Benton, Ky. “This is only about our third time in it. Couldn’t have asked for anything better, going against these guys that know their cars back-and-forth. We’re just happy to be here.”

Ricky Weiss had a terrific night aboard his Sweet-Bloomquist Chassis #7, increasing his Rookie points lead over Kyle Hardy, Cade Dillard, Blake Spencer and Chuck Hummer with a fourth-place effort on Friday night.

Finishing second in Drydene Heat 1, Weiss redrew the eighth spot and made the most of each groove on the track, making a late-race push for the top-three but coming up just one spot short. This gave the Canadian his second top-five of the year, placing him seventh in overall points standings.

The Series next heads to Smoky Mountain Speedway in Maryville, TN for another 50-lap showdown in the mountains on Saturday night, March 23. Can Brandon Sheppard tie Darrell Lanigan’s win-streak record? Find out when the 6th annual Tennessee Tipoff kicks off with hot laps at 6:30 p.m. EST., live on DIRTVision!