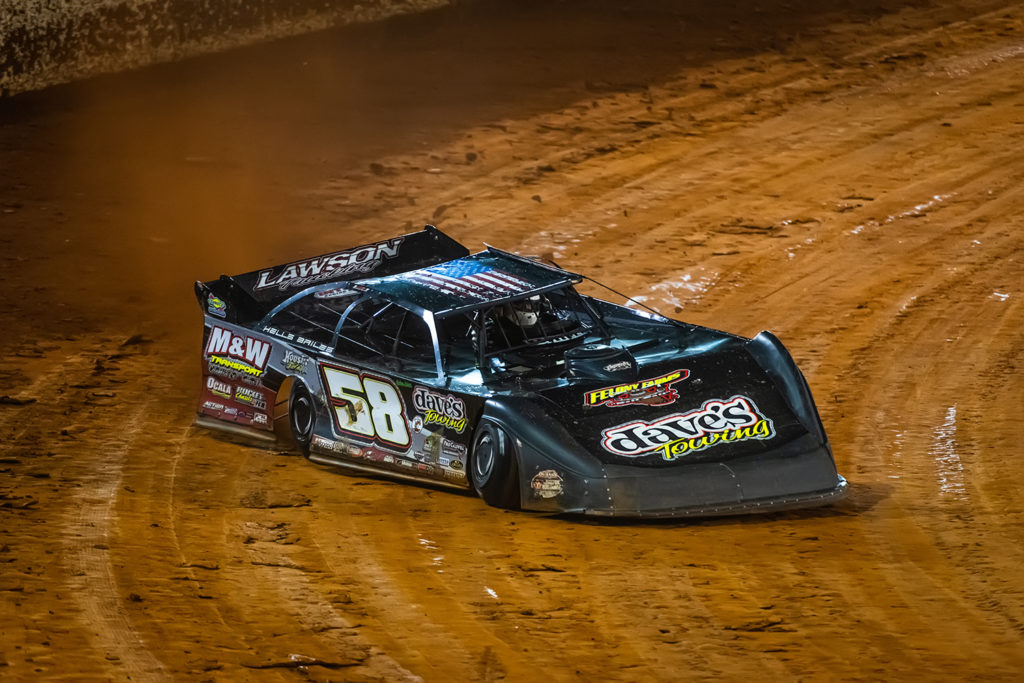 The season-long grind for the $10,000 top rookie prize begins with seven shows at Florida’s Volusia Speedway Park. It all starts on January 14-16 with the Sunshine Nationals, followed by the DIRTcar Nationals on February 10-13. Fan can BUY TICKETS HERE to those events.

Headlining the fleet of four rookies is Ross Bailes of Clover, SC in his Big Frog Motorsports No. 58 Rocket Chassis. The 31-year-old pilot is coming off a solid 2020 season, where he collected seven total wins including a Lucas Oil Dirt Late Model Series victory at Cherokee Speedway, which hosts a $20,000-to-win World of Outlaws race on March 26-27, 2021.

Prior to his full attempt with in 2021, Bailes has contested 25 career World of Outlaws Late Model features since he first debuted with the Series in 2010 at The Dirt Track at Charlotte. He’s been a top ten finishers in over half of his starts (13) and racked up all five of his top five results over the last two seasons.

The only rookie with a World of Outlaws win under his belt, Bailes most notably beats the Outlaws in May of 2019 when he outran an all-star cast including Brandon Sheppard, Don O’Neal, Brandon Overton, and Chris Madden for a $10,000 win at Cherokee.

Joining Bailes as one of the more experienced rookies is Ryan Gustin of Marshalltown, IA in the Dave Steine owned Rocket Chassis No. 19R sponsored by Tri-Star Engines & Transmissions. A superstar with the United States Modified Touring Series (USMTS), The Reaper is a two-time national champion with countless wins to his resume.

Ahead of January’s Sunshine Nationals (Jan. 14-16) at Volusia Speedway Park, Gustin has only attempted seven World of Outlaws Late Model Series events in his career. He’s made five feature starts, most recently coming this August during a Wisconsin swing to Cedar Lake Speedway for the 33rd annual USA Nationals, which returns in 2021 on August 5-7.

The third candidate for Rookie of the Year honors is Tony Jackson Jr. of Lebanon, MO with a fleet of new Rocket Chassis at his disposal. The 38-year-old driver owns six regional touring titles to his name, most notably five-straight MARS championships from 2013-17. Ironically enough, he’s never attempted a World of Outlaws Morton Buildings Late Model Series event; the Sunshine Nationals (Jan. 14-16) will mark his Series debut.

He’s not a complete stranger to the national touring game, however, as he has 35 career starts in Lucas Oil competition with three top five efforts. In 2020, Jackson finished fourth in MLRA standings with five top five finishes in 17 series starts. He also contested a pair of races with the DIRTcar Summer Nationals this year. He scored four wins across Illinois and Missouri during his latest campaign.

“We have been talking about this for awhile,” Jackson told DirtonDirt.com about his decision. “My wife is 100% on board and my little girl loves it maybe more than I do. My team is the best it’s ever been. My relationship with Darrell [Lanigan] is great. I just feel like it will help us get over the edge on big wings we have been really close to sealing the deal on.”

Ryan Scott of Garland, Pennsylvania rounds out the current crop of four Rookie of the Year contenders in 2021.

Set for the most ambitious year of his career, the 34-year-old driver will follow the Series from January to November with 58 stops in 16 different states. A regular on the northern swing, Scott has attempted 20 career events with the World of Outlaws Late Model Series, qualifying for four of those features.

His career-best run came in June 2018 with an eighth-place finish at Stateline (NY) Speedway, where the Series will return to race on June 17, 2021.

If you can’t make it to Volusia for the Sunshine Nationals (Jan. 10-13) or DIRTcar Nationals (Feb. 10-13), you can watch Every Lap Live on DIRTVision.

WHAT TO WATCH FOR: World of Outlaws Late Models Return to Tri-City Speedway