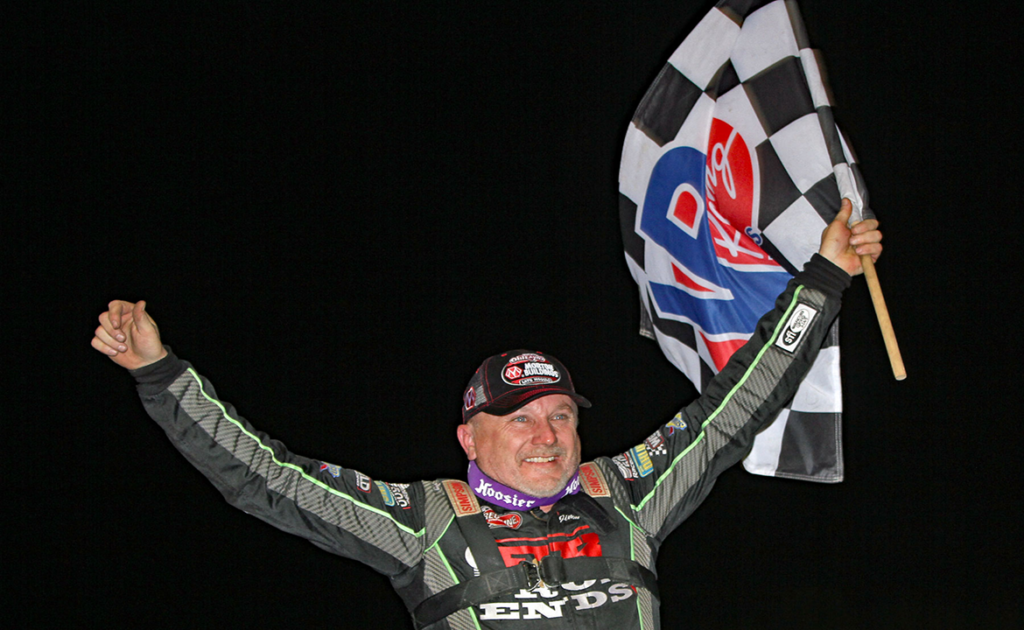 BARBERVILLE, FL – With all of his continued success around the national Dirt Late Model racing scene over the years, it seemed odd that one major Florida-Georgia Speedweeks venue Jimmy Owens never had a victory at was Volusia Speedway Park.

But on Thursday night at the DIRTcar Nationals presented by Bozard Ford, Owens finally added the track to his “conquered” list, as well as the first gator trophy to his collection.

“It’s awesome,” Owens said. “We’ve been coming down here for quite a few years now, and just couldn’t quite seem to get our ducks in a row. We’ve been steadily chunking away at it this week and it worked out for us.”

In short, Owens was smoother than silk, leading all 40 laps of the Morton Buildings Feature without missing a beat and cleanly fending off all challengers for his 16th career World of Outlaws Feature win. Dale McDowell crossed in second with his best run of the week while Josh Richards came from 12th to cap off the podium.

The Newport Nightmare grabbed the lead from polesitter Brandon Sheppard down the backstretch on lap 1 and immediately began putting some distance on the field. Sheppard challenged him to the inside in the opening circuits but was unable to make anything happen.

Through 40 laps, that was about the only time Owens was seriously challenged for the lead. Even lapped traffic couldn’t slow down The O-Show, as he maneuvered by every bit of it with ease and never let it slow him down once.

Using his preferred line around the bottom for much of the race, Owens seemed to have a terrific drive off of the corner that propelled him away from the rest of the field.

“I knew the bottom lane was going to clean-up there a little bit later and be the fastest way around,” Owens said. “When we got to lapped cars, we were still able to maneuver around them on the outside. The car was just flawless.”

His acceleration was certainly tested, however, with back-to-back-to-back restarts inside of the final 12 circuits. A hungry McDowell and Richards sat on his rear bumper for the final restart on lap 31, but Owens pulled away and brought the field back to the checkers.

Both the car and the track surface worked to Owens’ advantage throughout the race, but he knows Friday night’s race could be different conditions.

“As the track dries out, we’ve been missing just a little bit of something, maybe we found it tonight. The track throws something different at you every night, so tomorrow will be a different book,” Owens said.

Richards had a very strong car that he put on display early, advancing nine spots to break into the podium by the halfway point. Using that low line, Richards made a great move to McDowell’s inside for second on lap 21, which McDowell took back just nine laps later.

“Josh rolled by me and drove off there a little bit, and it took me a little bit to figure out what line to run, to reposition my car, McDowell said. “Then we had a caution come out, and I think that helped me and my right-front tire.”

On that final restart, Richards knew the clock was ticking on the time to make another move on McDowell and had to make a tough choice before taking the green.

“I really didn’t know whether to pick the top or the bottom on the restart,” Richards said. “Both [McDowell] and [Owens} are excellent in that type of condition when it’s patchy rubber and drive real straight.”

Defending DIRTcar Nationals Late Model champion Sheppard started the Feature on the pole but drifted back into the sixth position by race’s end. The 2018 Big Gator champion Chris Madden charged from as deep as 18th at one point to come back and finish eighth. Ricky Weiss was the final car to transfer out of his Last Chance Showdown and started 23rd, picking up 12 spots of position for an 11th-place result.

The World of Outlaws Morton Buildings Late Model Series action continues from the DIRTcar Nationals at Volusia Speedway Park on Friday night, where the field takes on another 40-lap, $10,000-to-win Feature.

Catch all the action live on DIRTVision!