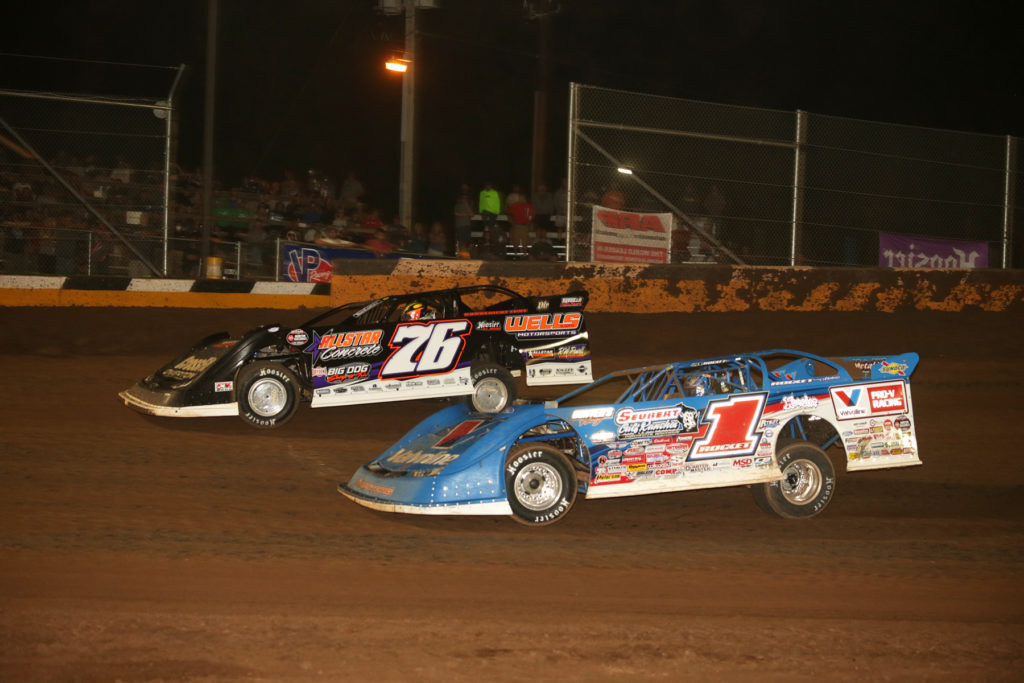 At a combined 42 victories, Brandon Sheppard and Brandon Overton are the two winningest drivers in Dirt Late Model Racing in 2020. This weekend, the next chapter in ‘The Brandon and Brandon Show’ is written with the World of Outlaws Morton Buildings Late Model Series.

With “The Most Powerful Late Models on the Planet” visiting Lavonia (Ga.) Speedway on Friday and Lancaster (S.C.) Motor Speedway on Saturday, fans will see B-Shepp and Big Sexy go head-to-head for the 25th and 26th time this season.

As two-thirds of the three-headed monster – along with Jimmy Owens – in Dirt Late Model racing this year, Sheppard and Overton have become forces to be reckon with everywhere they go. At 25 victories overall, Sheppard of New Berlin, Ill. leads the nation as the winningest driver in 2020, and behind him is Overton of Wells, Ga. at 17 triumphs himself.

In 24 previous encounters, Sheppard and Overton have competed against each other in ten World of Outlaws events, nine Lucas Oil Late Model races, and five DIRTcar sanctioned shows. To date, Sheppard has gotten the better of Overton in their head-to-head appearances with the No. 1 topping the No. 76 on 15-to-9 occasions.

The duo is nearly split in the win column with Sheppard taking five wins to Overton’s four when competing against each other. It’s worth noting that since the return to racing in May, Overton has trumped Sheppard four wins to one. Outside of two wins at East Bay and two wins at Volusia in February, Sheppard’s only other win against Overton came at Volunteer (Tenn.) Speedway in World of Outlaws competition in June.

For Overton, however, the driver of the Wells Motorsports No. 76 has soared into the limelight over the summer months. His triumphs over Sheppard include a Dirt Late Model Stream preliminary feature at Eldora (Ohio) Speedway, a Lucas Oil win at Smoky Mountain (Tenn.) Speedway, and a clean sweep of the World of Outlaws’ USA Nationals at Cedar Lake (Wisc.) Speedway worth $57,000 in August.

In 12 of their 24 matchups, Sheppard and Overton have both finished inside the top ten in the same feature. They’ve claimed top five finishes together on seven of those occasions and shared the podium four times. Twice they have finished 1st-2nd; those coming at East Bay (Fla.) Raceway Park on February 4 with Sheppard beating Overton; and then Smoky Mountain on June 13 with Overton topping Sheppard.

A winner at both Lavonia and Lancaster, Sheppard has been to victory lane with the Morton Buildings Late Models at both venues on the docket this weekend. Overton, however, is the most recent winner of the two at Lancaster, topping a May trip to the Lancaster, S.C. half-mile.

Each eyeing their own historic accomplishments, Sheppard chases his 14th World of Outlaws win of the season – four away from tying the single-season record of 18 wins – and his 69th career win with the series – eight away from tying the all-time record of 77 wins. Overton himself is after his 10th career with the World of Outlaws, which would make him the 17th different driver in series history with ten or more victories.

Along with Sheppard and Overton, a stout crew of World of Outlaws full-time competitors including Ricky Weiss, Cade Dillard, Darrell Lanigan, Chase Junghans, Dennis Erb Jr., Ashton Winger, Scott Bloomquist, Boom Briggs and Brent Larson, will be looking to stop ‘The Brandon and Brandon Show.’ Outside of them, some of the area’s best including Chris Madden, Chris Ferguson, Ross Bailes, and more, will be looking to spoil the party.

It all kicks off this Friday, September 4 at Lavonia Speedway in Lavonia, Ga. before the series heads to Lancaster Motor Speedway in Lancaster, S.C.. Tickets will be available for purchase at the gates both nights. If you can’t make it, you can watch Every Lap Live at DIRTVision.com.