World of Outlaws Return to Calistoga 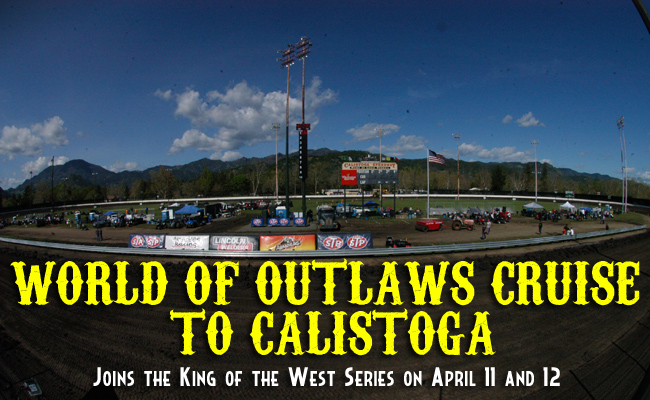 Calistoga, CALIF. – April 2, 2015 – After months of anticipation the Calistoga Speedway will finally open the 2015 season with one of the biggest weekends of racing in recent memory, when the World of Outlaws/ King of the West Series/ Civil War Series & Joe Hunt Series invade the venue for the Wine Country Outlaw Showdown on Saturday & Sunday April 11 & 12.

A legends autograph session is also planned for the weekend so make sure and arrive to the track early. Car displays on main street, world class restaurants, wine tasting in town and more is all part of the Calistoga experience. A new town shuttle will also be in place during the weekend. Calistoga Speedway’s all time race winner, Leroy Van Connett, will lead the autograph session before the races both nights. Nobody won more races on the Calistoga half-mile than Van Conett, who claimed victory circle 31 times, often after starting a race at the back of the field.

Brent Kaeding, with 21 victories, is the track’s second biggest winner. But nobody had a more torrid 1979 season at Calistoga than Mike Andreeta, who won 10 races at Calistoga. He dominated the half mile oval winning that year, winning five races in a row, a streak that has never been matched. Bring a hero card, a napkin, program, car fender or anything that you would like signed. It’s a chance to meet some of Calistoga Speedway’s biggest heroes and get an autograph as well. Current drivers are also encouraged to take part in the autograph session and be a part of it as well.

For the first time the King of the West 410 Sprint Car Series will be co-sanctioning each night with the World of Outlaws Sprint Car Series at the track. In another first the Civil War 360 Sprint Car Series presented by Flowmaster will compete as the added class on Saturday, while the Joe Hunt Magnetos Wingless Sprints will be in action alongside WOO & KWS on Sunday. KWS, Civil War & the Hunt Series are all run under the Prentice Motorsports Group banner, giving it a heavy presence during the weekend.

Last year’s Calistoga opening night winner Sweet sits third in the standings and is just 13-markers back of Schatz for the lead, while fourth place Paul McMahan stands only 18-digits back of the lead. McMahan was the 1995 Calistoga Speedway track champion and has won four-times in his career at the track. Three of those victories came in his championship year of ’95 while driving for car owner Clyde Lamar.

The King of the West Sprint Car Series competed at Calistoga Speedway last June and it saw local favorite Rico Abreu from Rutherford score victory in the Wine Country Classic. Even more track work had gone on prior to the event and what transpired was some of the best Winged Sprint Car racing seen at Calistoga. Passing was prevalent all night long and Abreu captured a great main event over Chico’s Jonathan Allard & eventual KWS champion Kyle Hirst. The King of the West 410’s will once again compete in the Wine Country Classic on June 27 of this year.

After winning the Chili Bowl Midget Nationals in January & a pair of World of Outlaws events recently, Abreu will return to Calistoga Speedway looking to add an Outlaw win at his home track. The now 23-year-old last season captured the Louie Vermeil Classic with the USAC/ CRA Series in August and also won opening night with the USAC Western Midgets. Abreu also tallied a pair of top-five finishes with the World of Outlaws at the Napa County Fairgrounds facility last April.

The Saturday appearance by the Civil War 360 Sprint Car Series presented by Flowmaster will mark the first race at the track for the tour since Princeton’s Mason Moore picked up the victory in August of 2012. The series will be led into town by current point leader Justin Sanders, who has finished third in each of the first two Civil War events. The Sunday showcase marks the debut of the Joe Hunt Magnetos Wingless Sprint Series and is the first of two Calistoga appearances, with the second coming in conjunction with the King of the West Sprint Car Series’ Wine Country Classic.

“We are thrilled to bring a show like this to the Calistoga Speedway next weekend,” said Chris Morgan of Motorsports Ventures. “Having the World of Outlaws & King of the West Sprint Car Series co-sanction the weekend should give us one of the best fields of Winged 410 Sprint Cars we’ve seen in some time at Calistoga. Adding in the Civil War Series & the Hunt Series is icing on the cake so we hope the fans are excited, because I know we are. It’s going to be pretty awesome to look down in those pits on Saturday night and see so many Winged Sprint Cars.”

Racing on Sunday night is scheduled to begin an hour earlier than Saturday. Opening ceremonies are expected to begin at 7pm on Saturday, while Sunday will see opening ceremonies at 6pm to help get everyone on the road at a decent hour. The main gate for spectators will open at 3pm each day, with Will Call & the Ticket Window opening at noon both days. Two-night weekend tickets and single night tickets are available by visiting http://dirtcar.ticketforce.com/eventperformances.asp?evt=163 or by calling 1-877-395-8606.

There is no better setting for a race track than the picture-perfect and historic town of Calistoga. In the heart of Napa Valley, the town offers the best in food, wine and shopping. To make your trek easier from the race track to town, look for the Calistoga Speedway Shuttles, which will be making FREE runs downtown and back both days of the Wine Country Showdown. Save your feet for shopping.

The Calistoga Speedway is located on the scenic Napa County Fairgrounds in Calistoga, California at 1435 North Oak Street and has been in existence since 1937. For more information on the half-mile log onto http://www.calistogaspeedway.org and for history visit Bobby Gerould’s Hammerdown USA at http://www.hammerdownusa.com/Calistogacareerwins.html