WHAT TO WATCH FOR: World of Outlaws return to racing at Knoxville Raceway

After more than a two-month hiatus, the World of Outlaws NOS Energy Drink Sprint Car Series will make its return to racing Friday night at Knoxville Raceway for a historic event.

With no fans in attendance, the event will be broadcasted live on DIRTVision with Hot Laps at 6:30 p.m. (CT), followed by qualifying and racing at 7:30 p.m. (CT).

Here are the storylines to follow throughout the night:

Larson last competed with the Series during the DIRTcar Nationals in February, with a best finish of 16th — currently sitting 24th in Series points. While he missed the Feature for the Knoxville Nationals last year, Larson has a stellar record at Knoxville. He’s finished on the podium of the Nationals in 2017 and 2018 and finished fifth at the prestigious race in 2016.

It’s been more than a year since Kahne’s last race with the Series, after getting injured in a non-World of Outlaws Sprint Car race. Now, healed up, Kahne will make a rare appearance back behind the wheel of the #9 car, with its usual driver, James McFadden stuck in Australia. He’s attempted to qualify for the Knoxville Nationals in previous years, but his last World of Outlaws Feature race at the half-mile speedway was almost 20 years ago.

BACK-TO-BACK ATTEMPT FOR GRAVEL: David Gravel, of Watertown, CT, returns for his second year with Jason Johnson Racing, after an exceptional 2019 season that saw the pair claim 21 Quick Time awards and win 12 races — including the NOS Energy Drink Knoxville Nationals. He and JJR have already picked up two Quick Time awards this year at the DIRTcar Nationals.

Gravel won every race he entered during the Knoxville Nationals week last year and has picked up a Feature win at the track for the past two years. He’ll look to continue his winning streak at the iconic track on Friday night.

SWEET GOING FOR FOUR YEAR STREAK: Brad Sweet, of Grass Valley, CA, is currently the only driver on the World of Outlaws tour who has won a Feature at Knoxville Raceway for at least the past three years — including his 2018 Knoxville Nationals title. He’ll try to extend that record to four this year and continue the strong momentum he’s built since the end of 2019.

SCHUCHART BUILDING MOMENTUM: While David Gravel won the Knoxville Nationals last year, Logan Schuchart, of Hanover, PA, and his Shark Racing team stole the show with his 22nd to second run. He has yet to win a World of Outlaws Feature at Knoxville, but Schuchart has been on the best run of his career.

The Shark Racing driver won a career high eight races in 2019 — doubling his career win total — and picked up his first Volusia Speedway Park win February during the DIRTcar Nationals. He’s kept his momentum going during the last two months by winning the World of Outlaws: eDirt Racing Shootout at the virtual Eldora Speedway on CBS Sports Network.

SCHATZ GOING FOR 300: Ten-time Series champion Donny Schatz, of Fargo, ND, picked up his 295th career World of Outlaws Sprint Car Series win in February at the DIRTcar Nationals. The Tony Stewart/Curb-Agajanian Racing driver has won 11 or more races the past eight years and is on track to reach a milestone 300 career wins this season.

Schatz has an impeccable record at Knoxville Raceway with 10 Knoxville Nationals wins and finished second or first at the Nationals from 2005 to 2018. His last win at the track came in 2018. In his second year with crew chief Steve Swenson, Schatz will be eyeing a return to Victory Lane at Knoxville.

HOME DEFENSE FOR BROWN: Reigning Knoxville Raceway track champion Brian Brown will look to claim a win with the World of Outlaws at his home track for the second year in a row in his #21 car. The Higginsville, MO native, who has 49 career Feature wins at Knoxville, won his first World of Outlaws race at the track last June.

A win Friday night would give him a milestone 50 career wins at the track in his, tying him with three-time World of Outlaws Sprint Car champion Sammy Swindell for fifth on the Knoxville Feature wins all-time win list.

iRACING LEADS TO BIG OPPORTUNITY: The World of Outlaws NOS Energy Drink Sprint Car Series has hosted 11 iRacing Invitational races the past two months and Pennsylvania’s Robbie Kendall has been one of the most consistently competitive drivers of the league. Through his success — which includes an iRacing Invitational win at Williams Grove Speedway — and participation with the World of Outlaws when the Series races in PA, Kendall was given the opportunity of a lifetime in being invited to Friday’s World of Outlaws race at Knoxville. He’s made eight career starts with the Series, so far, and has a best finish of 14th in his #55k car. 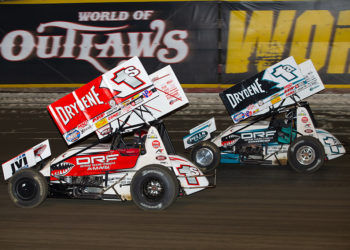 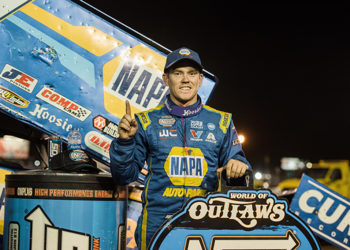 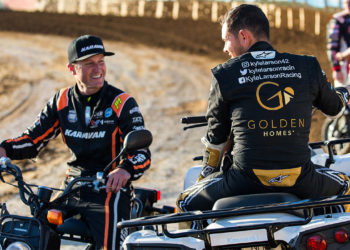 Checkered Past: Outlaws do Daytona