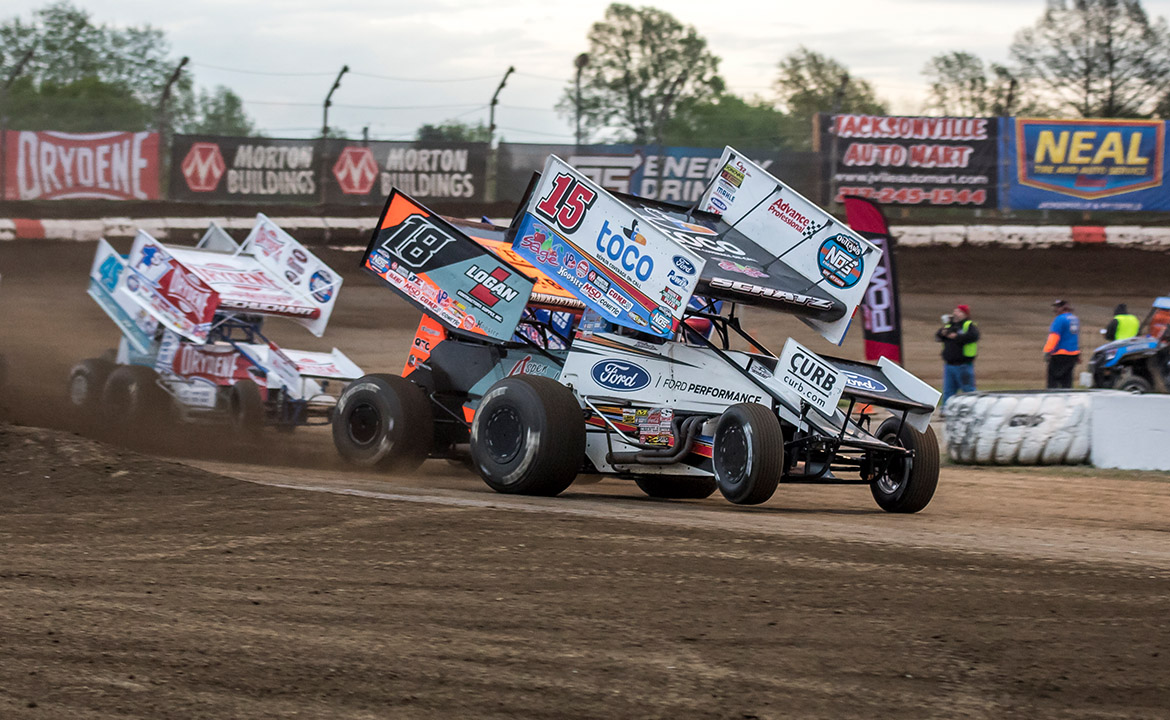 The winged warriors of the World of Outlaws NOS Energy Drink Sprint Car Series will make their third appearance on Wednesday, Sept. 25, at Jacksonville Speedway for a high-octane show.

Drivers thrilled fans with blistering laps and daring moves in the Spring before the race was rained out and rescheduled for September.

Fans are sure to see why the World of Outlaws is The Greatest Show on Dirt once the cars hit the high-banked quarter-mile track again. Drivers like Brent Marks, Carson Macedo, David Gravel and 10-time Series champion Donny Schatz all showed speed in the Spring.

Schatz already has one win this year on a quarter-mile track, at Nashville Fairgrounds Speedway. He held the track record at Jacksonville Speedway until this year when Aaron Reutzel became the new track record holder with a time of 10.028 sec.

In Schatz’s return to Jacksonville Speedway, not only will he be looking for another win, he’ll be looking for a good points night. He’s been in a tight points battle with Brad Sweet all season long. The two drivers have been trading the points lead all season long, neither one able to pull away from the other.

Knoxville Nationals winner David Gravel will be eager for a win at Jacksonville Speedway to bring his Jason Johnson Racing team their ninth victory of the year. He currently sits third in points and will be looking to keep himself in striking distance of Schatz and Sweet if they have a few bad nights.

Macedo, in his World of Outlaws rookie season with Kyle Larson Racing, has already won three times this year. He’s proved he’s fast on small bullring tracks with a win on the quarter-mile Silver Dollar Speedway. Macedo also recently finished second at the quarter-mile Placerville Speedway. He’ll be eager to put his bullring skills to use again.

Marks has shown speed on quarter-mile tracks this year after coming close to winning at Nashville Fairgrounds Speedway and showing speed at Jacksonville Speedway earlier in the year by charging from 10th to second in his Drydene Heat race and winning the DIRTVision Fast Pass Dash. The Pennsylvanian will be one to watch come race day.

Fans who attended the canceled Spring Jacksonville Speedway race can get into the event with their wristband and ticket from the Spring event. Get tickets and more information.

As always, if you can’t make it to the race, make sure to watch all of the action LIVE on DIRTVision.com.