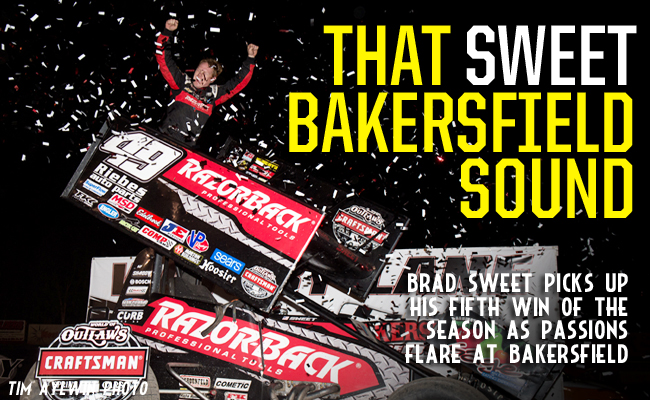 Sweet, who passed Joey Saldana on a late restart in the Budweiser Bash feature, tied Donny Schatz for the most wins on the season.

“It seemed like every time the race started getting good the caution came out,” Sweet said. “The track was getting really really tricky but in great racing shape… It’s awesome. We got a great start to the season, my guys behind me have given me great cars all throughout the year. Can’t thank them enough. Hopefully we can keep the momentum going.”

Daryn Pittman, who was forced to change an engine earlier in the night, led the field to the green flag as the Outlaws returned to Bakersfield for the first time since 2005. Jason Johnson battled early for the lead but Saldana charged forward.

By lap nine, Pittman worked his way through traffic as Saldana closed the gap and began to challenge for the top spot. As the two drivers completed the next lap, Saldana pulled side-by-side with Pittman in his No. 83 Roth Motorsports car off of turn two, down the back straight and into turns three and four. Pittman took on the high side as Saldana stayed wheel-to-wheel with Pittman through the middle. In the middle of three, Saldana and Pittman made contact sending Pittman into the cushion which caused Pittman’s car to tumble into the turn four catch fence.

“Obviously my right rear hit his front end,” Saldana said of the contact with Pittman. “I didn’t see him at all. I got the lead there and the 98 car was going to the bottom and he turned right in front of me so I was sliding back to the cushion. (Pittman) must have tried to get a run on the outside and my right rear hit him. I hate it for him, it was a good race.”

With Pittman’s night ended, Saldana took over the lead. Saldana pulled away while Jason Johnson and Sweet battled for the second position.

As the field worked to complete lap 18 D.J. Netto and Terry McCarl made contact into turn one and both flipped. McCarl’s car came to a rest on its wing at the top of the track exit ramp in turn one. Netto’s car was upside down in turn one. McCarl, visibly frustrated by the crash exited his car and sought to confront Netto. McCarl did not however get the chance as the scene was cleared and he headed to the pits.

The fireworks were not yet over.

The battle up front continued when the feature returned to green. Saldana maintained the lead as Sweet took over the second position in his No. 49 Razorback Professional Tools car from Johnson.

The final caution of the night fell on lap 28 as Jacob Allen got turned around in the middle of turns three and four. The first restart attempt was called back by series officials after a jumbled start by the front row and the field was reset for a second attempt. When the green flag did fall, Sweet battled past Saldana on the exit of turn two and took over the lead.

“Getting into lapped traffic was pretty dicey there,” Saldana said. “We had a good car there all night. I’m kind of confused why they called back that first restart and then made us go again. (The 49 team is) smart and (Brad) knew where he had to go to hold me down, down into one.”

Sweet said a lot of the night was about staying out of trouble.

“Those restarts are tough,” Sweet said. “We’re so wide, we were just trying to time when Joey was going to takeoff and luckily we came out side-by-side and I was able to beat him into one and hold him off there. Once I got to clean air, the Razorback car was really good.”

With Johnson slipping back, David Gravel and Shane Stewart battled for the final podium position. Gravel had the advantage in his No. 5 Big Game Treestands Car and made sure to keep Stewart behind. Several laps of fierce back-and-forth competition pushed passions high. As Sweet won the feature with Saldana close behind, Stewart, unhappy with the way Gravel ran the remaining laps, got behind Gravel and tapped his rear bumper bar. Gravel finished the night in third.

“It just looked like the outside ended up being faster there at the end,” Gravel said. “Brad and me were rolling pretty good on the bottom and it just seemed like the bottom gave up and the top was the place to be and that’s where I restarted. It was a great run.”

Sweet’s win also gave his Kasey Kahne Racing with Mike Curb team its ninth podium finish of the season, the most of any driver.

RACE NOTES: Brad Sweet tied reigning series champion Donny Schatz for the most wins so far this season. Of the seven drivers who have won in 2016, Sweet and Schatz are the only drivers with multiple wins… Donny Schatz was the night’s KSE Racing Hard Charger, advancing 12 positions to finish in fifth… Joey Saldana’s quick time tonight was his third quick time of the season. He and Brad Sweet are tied for the most quick time awards on the season… Tonight’s win gave Brad Sweet his ninth podium finish of the season. There have been 15 features total.