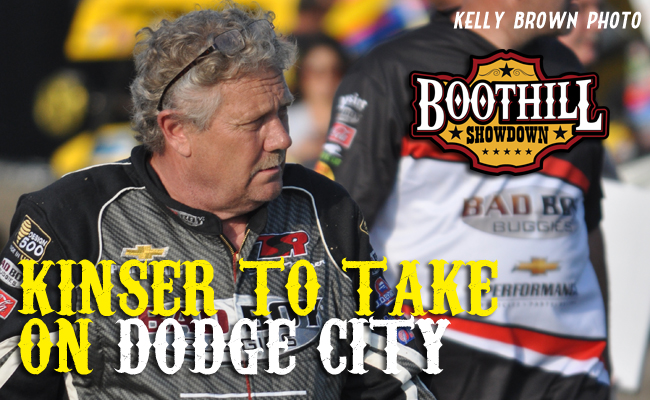 DODGE CITY, Kan. – June 29, 2015 – An already stellar event just got that much better, as Steve Kinser will make one of his rare 2015 World of Outlaws appearances in this weekend’s “Boot Hill Showdown” at Dodge City Raceway Park.

The “King of the Outlaws” will be among the field of elite World of Outlaws Sprint Car drivers atop the 3/8-mile clay oval in southwest Kansas for both nights this Friday and Saturday, July 3-4.

With tickets going quickly, fans can still obtain their weekend tickets in advance at https://dirtcar.ticketforce.com/eventperformances.asp?evt=160. Those purchasing a two-day package will receive a free fan pit pass.

Kinser, the 20-time series champion, is familiar with victory lane at Dodge City Raceway Park as well with two of his 577 career WoO triumphs taking place in Dodge City.

Since the all-Kinser version of the Boot Hill Showdown in 2012, Dodge City Raceway Park has turned into Daryn Pittman’s personal playground.

The 2013 World of Outlaws champion from Owasso, OK, has topped three of four feature events over the past two years including a sweep of last year’s Showdown.

The only driver to interrupt Pittman’s perfection over the past two years is North Dakota’s Donny Schatz, who posted a Dodge City win in 2013.

The defending series champion, Schatz is in the midst of a remarkable year with 17 wins through the opening 39 events of the year.

The IMCA Sport Modifieds and Colorado Lightning Mini Sprints will be in action as well on both nights.

Along with the World of Outlaws “Boot Hill Showdown”, the 2015 slate of events at Dodge City Raceway Park includes 15 nights of competition with a number of special events along the way. The track’s full slate of events is available at http://www.dodgecityraceway.com/schedule/.