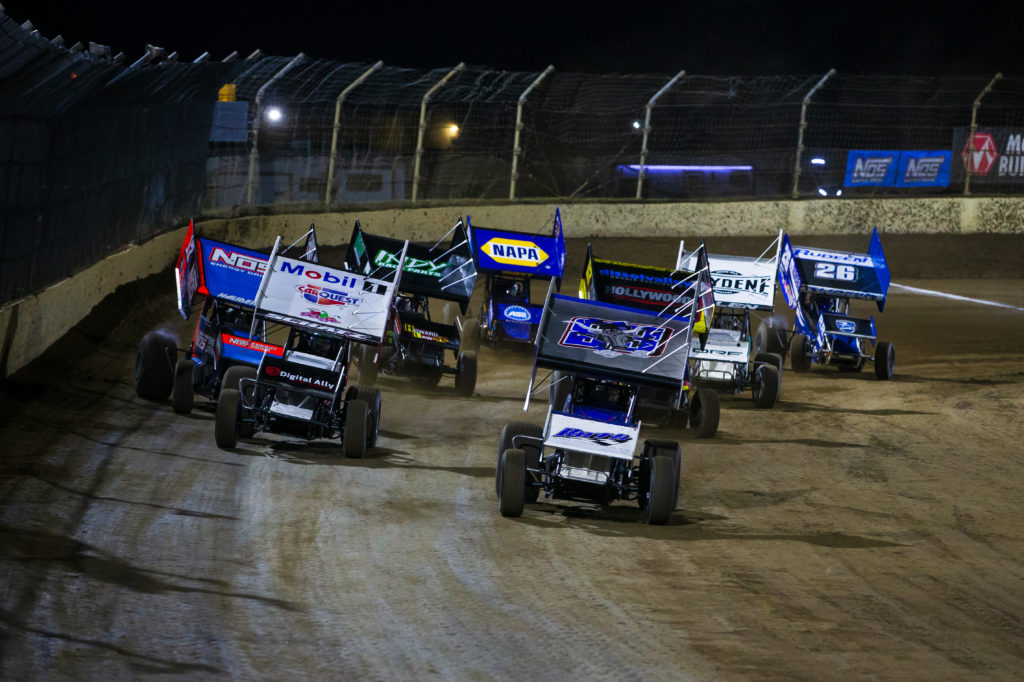 One of the most enjoyable stops on the grueling World of Outlaws NOS Energy Drink Sprint Car Series tour is only one month away.

After a one-year hiatus, The Greatest Show on Dirt is returning to The Dirt Track at Las Vegas for a one-night showdown on Thursday, March 4, which precedes a weekend of NASCAR action at the Las Vegas Motor Speedway.

Although it’s an early-season bout, Nevada diehards will play witness to what is expected to be one of the greatest championship battles in the 44-year history of the World of Outlaws. With 16 full-time drivers committed to the tour this year, the title is as wide open as ever with the likes of Donny Schatz, Brad Sweet, Logan Schuchart, David Gravel, Sheldon Haudenschild, Carson Macedo, Aaron Reutzel, and others all in the hunt.

For Schatz, the ten-time Series champion has turned Vegas into his personal playground over the years. His stat line on the half-mile reads as 65 starts, 13 victories, 29 top fives, 46 top tens, and 252 laps led – all Outlaw records at the track.

“The hype of being in that Las Vegas area, there’s a lot of fans that you don’t want to disappoint.” Schatz said on the atmosphere. “That whole few days is a lot of fun; it’s a real entertaining, high profile event.”

Donny first triumphed at Las Vegas during the 1999 season finale, when World of Outlaws sophomore contender Mason Daniel wasn’t even born yet. He’s most recently went on a tear aboard his Tony Stewart Racing #15, collecting five of the last seven wins at Vegas in Outlaws competition.

“For us, we’ve found a perfect balance and baseline for that place, really since I won that last race there back in 1999.” he noted on his success at the track. “We’ve seen so many conditions, changes, but it’s a really unique surface. We’ve gone back many, many times with the same thing and the car always feels really good. We’ve found a comfort zone there, so it’s just about fine tuning to make it that much better.

Along with Schatz, Sheldon Haudenschild and Kraig Kinser are the only other full-time Outlaws to claim a victory in Vegas. Ironically enough, both drivers did so one year after winning Kevin Gobrecht Rookie of the Year honors, and it was the second career win for them both.

Coming in fresh off a breakthrough seven-win campaign in 2020, this return to Vegas and the whole year, is crucial for Lil Haud’s rising stock. With full backing from NOS Energy Drink on his Stenhouse Jr. / Marshall Racing #17 and crew members Kyle Ripper, Drew Brenner, and Nickolas Goodfleisch all back, Haudenschild has the tools to compete for his first career World of Outlaws championship.

“Going on NASCAR week is really cool with how many fans we get to come over,” Haudenschild offered on how special Las Vegas is. “The track always puts on a great race too. I remember the last time we were there it had two totally different surfaces. We were ripping around the top one night and the next you could really maneuver around. It’s a fun place as a driver.”

In all, the World of Outlaws Sprint Cars have contested 63 events at The Dirt Track at Las Vegas, dating back to Mark Kinser’s win in the debut on November 6, 1996. The two-time Series champion still owns the most impressive span at Las Vegas to this day, which was a five-race win streak that included sweeping all four events during the 1998 season.

Next month’s Thursday, March 4 event marks the only appearance in Nevada this season for the World of Outlaws NOS Energy Drink Sprint Car Series.