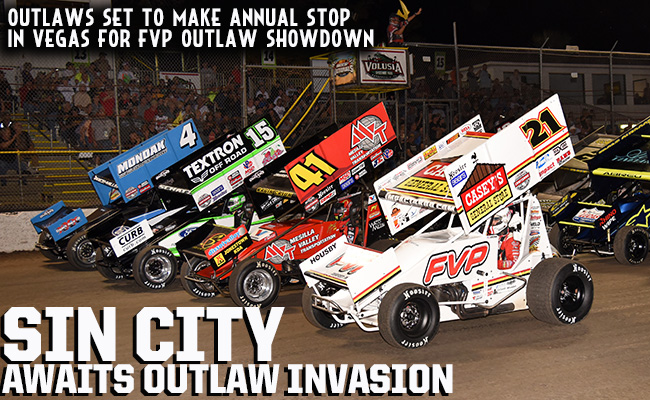 The World of Outlaws Craftsman Sprint Car Series prepares to make its much-anticipated annual stop in Sin City at The Dirt Track at Las Vegas Motor Speedway on Wednesday, February 28 and Thursday, March 1 with the running of the FVP Outlaw Showdown.

“We are thrilled to continue our partnership with the World of Outlaws Craftsman Sprint Car Series at The Dirt Track at Las Vegas Motor Speedway,” said FVP Senior Brand Manager Amber Misunas. “The FVP Outlaw Showdown is one of the most popular races on the schedule for fans and teams alike as The Greatest Show on Dirt takes center stage in the Entertainment Capital of the World. We couldn’t be prouder to be associated with the event.”

“I always enjoy going to Las Vegas. We always seem to run pretty well and the crowds are always awesome. Having my partner FVP being the presenting sponsor of the race makes it that much more special to run well there. It’s always good to join our customers and employees at the FVP hospitality tent then go out and perform for them later in the night,” Brown said.

The Dirt Track at Las Vegas Motor Speedway has been a staple on the World of Outlaws schedule since 1996 when Mark Kinser won the inaugural visit to the semi-banked half-mile. Entering 2018, the man to beat on the World of Outlaws tour and at Vegas remains Fargo, ND native Donny Schatz as he enters the midweek showdown with the 2018 DIRTcar Nationals Big Gator Championship in tow. Schatz is no stranger to Victory Lane at The Dirt Track at Las Vegas Motor Speedway; the nine-time Series Champion swept both nights of the FVP Outlaw Showdown in 2017. In his illustrious career, Schatz has a whopping 11 career victories at Vegas, dating back to 1999.

The target on the back of Schatz has never been bigger, and his competition is ready for the challenge. Series standouts David Gravel, Daryn Pittman, Shane Stewart and Brad Sweet have shown speed out of the gate in 2018 and will look to score their first wins of the season in Sin City. The only driver to beat Schatz thus far is 2017 Kevin Gobrecht Rookie of the Year Award recipient Sheldon Haudenschild, who has started his sophomore season in convincing fashion, picking up his first Series win along with a pair of KSE Hard Charger awards at DIRTcar Nationals in Barberville, FL.

Tickets for the FVP Outlaw Showdown are still on sale and can be purchased here. New for 2018, every single World of Outlaws Craftsman Sprint Car Series race will be live streamed thanks to DIRTVision. If you can’t make it to the track, be sure to watch all the action online as it happens. Following the World of Outlaws visit to Vegas, the Series heads to Southern California, commencing a month-long tour through the state at Perris Auto Speedway in Perris, CA.