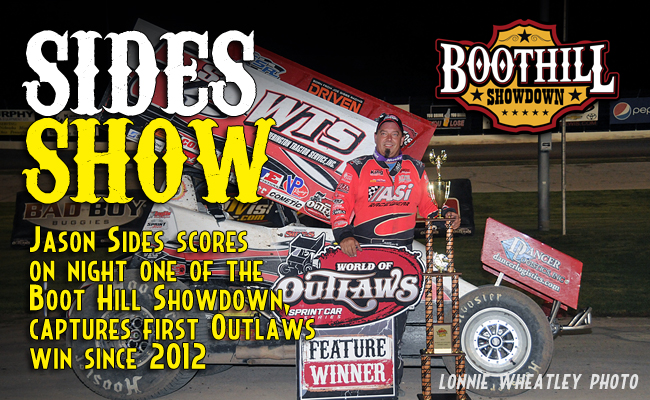 “It’s been a long time,” said an emotional Sides in victory lane. “It’s been a long last couple of years. It’s just one of those things that we just keep plugging away. We’re out here having a good time about it but for the most part still trying to make a living and beat this 15 car over here.”

The win, his second at Dodge City Raceway Park, comes as Sides has spent much of the last month without any full-time crew members to help his family owned team.

“I miss my brother (Paul) being out here but he had to go home,” Sides said. “It’s just one of those things where it’s a big family sport and it’s like a big family to us out here and we really appreciate it.”

A favorite with fans and his fellow competitors alike, Sides’ win was met with congratulations from the guys he beat.

“I’m happier than hell for Jason Sides,” said Schatz, who finished second. “He drove the wheels off that thing and I tried everything I could to get back by him but he was awful good tonight.”

Joey Saldana, who finished on the podium in third on Friday night, followed that up.

“He’s been out here doing this deal all by himself so he’s very much deserving of this win tonight,” Saldana said. “Proud of him and his guys.”

The last time Sides stood in victory lane with the World of Outlaws was at Federated Auto Parts Raceway at I-55 in October 2012.

David Gravel led the field to green but it was Jason Johnson, back in just his second race since returning from medical leave, who led the first six laps. Schatz shot to second place before the field made the first circuit and hung tight on Johnson as the two began to work their way through traffic. Schatz, who was fast on the bottom all night, got around Johnson off of turn four and went on to lead lap six. Johnson tried to work his way back by a few laps later, but Schatz was able to hold him off.

It was a surging Sides though who posed the biggest threat to Schatz. Sides, who started fifth in his No. 7S Dancer Logistics/FSR/ WTS/King Racing Products car, took over third on lap 1 and second on lap 12. As Schatz worked his way through traffic, Sides waited.

“It was just one of those things where I was committed to the bottom and if they tried to slip up off the bottom we were going to get underneath them,” said the Bartlett, Tennessee-native.

As Schatz did just that in his No. 15 Bad Boy Buggies car, Sides made his move and took over the lead as the two drivers completed lap 14. Schatz closed the gap a couple of times as the laps ticked by, including a close call for Sides on lap 17, but Sides held off the reigning champion.

Sides pulled away in the waning laps as he worked his way through traffic.

“It seemed like we rotated pretty good around the corners and we could get underneath the slower cars there,” Sides said. “We could run the top in three and four pretty hard and got around a few cars like that. We just were committed to the bottom and the Kistler Engine just kept pulling hard off the bottom and we kept going with it down there.”

Schatz said he struggled all night to get his car to work as well on the top of the race track as it did on the bottom.

“That was obviously the preferred line,” Schatz said of the top. “I told the guys the wrong direction to go with the racecar and it’s my own fault. Tonight’s the night you want to do that. We want to be better for tomorrow night. There are no excuses, (Sides) drove around us. He got me in lap traffic and that’s how you win them and that’s how you lose them. We don’t want to run second but if we have to run second, racing that way, that hard, is pretty awesome.”

Saldana, who, in addition to scoring his third podium finish in a row, took home the KSE Racing Hard Charger Award, methodically worked his way forward from a ninth place starting position. The driver of the No. 71M Motter Equipment car jumped to fifth by lap two and to fourth by lap seven. After briefly slipping back to fifth, Saldana worked his way forward and got around Daryn Pittman for third with three laps to go.

The World of Outlaws Sprint Car Series celebrates the 4th of July and closes out the Boot Hill Showdown tomorrow night at Dodge City Raceway Park. For more information on the event and to learn how to purchase tickets, visit http://woosprint.com/boot-hill-showdown.

RACE NOTES: Logan Schuchart was the night’s quick qualifier after a lap of 12.708. It was the first quick time of the season for Schuchart… Jason Sides’ win tonight was the first for him since winning at Federated Auto Parts Raceway at I-55 in October 2012… With his win tonight, Jason Sides became the 15th different winner of a World of Outlaws event this season… Joey Saldana was the night’s KSE Racing Hard Charger, advancing six positions to finish in third.