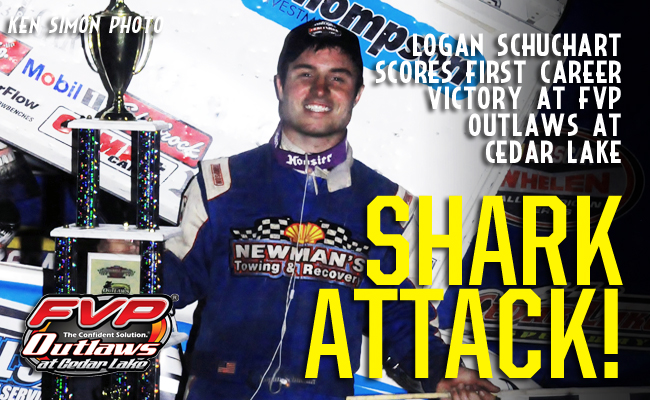 Joins Bill Balog as the only other first time winner, so far, in 2016

NEW RICHMOND, Wisc. – July 8, 2016 – It was not easy but Logan Schuchart did what he had to Friday night at Cedar Lake Speedway to score his first career World of Outlaws Craftsman Sprint Car Series victory as he battled past Joey Saldana and held off Donny Schatz to win the FVP Outlaws at Cedar Lake.

Schuchart, who started the feature on the front row with Shane Stewart, jumped out to the lead early but succumbed to Joey Saldana’s charge on a lap seven restart. Schuchart battled back as the two drivers worked their way through traffic and despite strong advances from Donny Schatz late, Schuchart held tough.

“I’m proud of our team. We’ve gotten close a couple of times and I can tell the disappointment when we come back,” Schuchart said. “I told everybody, ‘we’re going to get one of these after a while.’ You know how hard it is racing with the Outlaws and how difficult it is every night, but I believed we were going to get it done and sooner or later it was going to start clicking.

“I promised my little brother, two years ago, he said, ‘how come you don’t win anymore?’ I said, ‘well, what do you want me to do? The next time I win, I’m going to stand on the wing.’ He said, ‘alright.’ So tonight, I had to fulfill that promise to my little brother. That felt great.”

After three podium finishes so far this season, the win was a long time coming for Schuchart and his No. 1S Mark Pell Tire Service/Marty Thompson Investments Shark Racing team, owned by his grandfather, sprint car legend Bobby Allen.

“Just our team, my grandpa, never quit attitude. The guy just keeps going, never quits. I owe everything to him. The rest of my team, Jake, Joe, Aiden, Jacob – we all work hard.”

Rico Abreu helped kick off the night as he scored his first quick time award of the season. Stewart led the field to the green in the 35-lap feature – just his second pole position of 2016.

Schuchart jumped out to an early lead but as he caught traffic, Saldana closed the gap. A caution flag flew on lap seven and on the restart, Saldana jumped out to the lead. A battle heated up behind those two between Schatz, Daryn Pittman and Stewart for the third, fourth and fifth positions. Ultimately, Schatz held onto the third spot as Stewart held fourth.

As the leaders again caught traffic, Schuchart closed the gap on Saldana and found an opening. Schuchart dove into turn one as the field worked to complete lap 16, pulled side-by-side with Saldana and beat him onto the back straight. Saldana charged back, throwing the slider into turn three, but Schuchart maintained the top spot.

By lap 20, Schatz, then running third in his No. 15 Bad Boy Off Road/Chevrolet Performance J & J, was catching Saldana. Two laps later, Schatz found his way around Saldana and set his sights on the leader. Schuchart got caught up by lapped traffic three laps later and Schatz cut his second and a half lead to almost nothing.

The final caution flag of the night fell with eight laps remaining. On the restart, Schuchart powered forward and with a clear track ahead, he built an insurmountable lead on Schatz.

Schuchart was the 15th different winner of the season.

“Anytime you have Donny starting next to you to end the race, it’s going to make you nervous,” Schuchart said. “I was just trying to not let the butterflies get to me. I felt like I was running my race. I felt like not being in lap traffic would help me, so as long as I could get the lead and get in my line he was going to have a hard time passing me. Those guys were good, but tonight we were just a little bit better.”

Schatz, who extended his lead in the championship standings to 109 points over Brad Sweet, scored his season leading 21st podium finish of 2016. Schatz congratulated Schuchart following the feature.

“Happy for Logan,” Schatz said. “Logan’s been knocking on the door looking for a win for a long time so good to see him get a win there.

“I felt like we had a good shot there on the yellow but I killed us. I don’t know if I heated up the tires too much after that or what happened. (Schuchart) was able to move around in the middle of one and two and that’s where I needed to be. We didn’t run all that great but we felt that way last year and run second the first night and won the second night. So we’ll take that tonight as long as we can reverse that tomorrow night.”

For Saldana, the finish extends a solid run for the No. 83 Roth Motorsports car. Like Schatz, Saldana too had kudos for Schuchart and his Shark team.

“I want to congratulate Logan and the Shark team,” Saldana said. “Winning your first one means so much. He’ll win many more. It was nice to see them finally get something rewarding. You put a lot of work to run with the World of Outlaws and run these teams.

“Good effort by the whole Roth team. We missed it just a little bit. We built a new car and we were just off a little bit… hopefully we come back here tomorrow night and get a little bit better.”

Paul McMahan was the night’s KSE Racing Hard Charger, advancing 11 positions to finish in 12th after he transferred out of the Last Chance Showdown.

The World of Outlaws Craftsman Sprint Car Series wraps up its FVP Outlaws at Cedar Lake double-header at Cedar Lake Speedway Saturday night. For more information and to learn how to purchase tickets, visit WoOSprint.com/Cedar-Lake-Speedway.

RACE NOTES: Rico Abreu scored his first quick time award of the season at Cedar Lake after a qualifying lap of 11.247… Logan Schuchart became the second driver of the season to score his first career World of Outlaws Craftsman Sprint Car Series victory. He joins Bill Balog on the list of new winners… Paul McMahan was the night’s KSE Racing Hard Charger, advancing 11 positions to finish in 12th… In addition to being the season’s leading qualifier, Joey Saldana is also the season’s leading Heat race winner. After tonight he now has 24 Heat races win on the season.