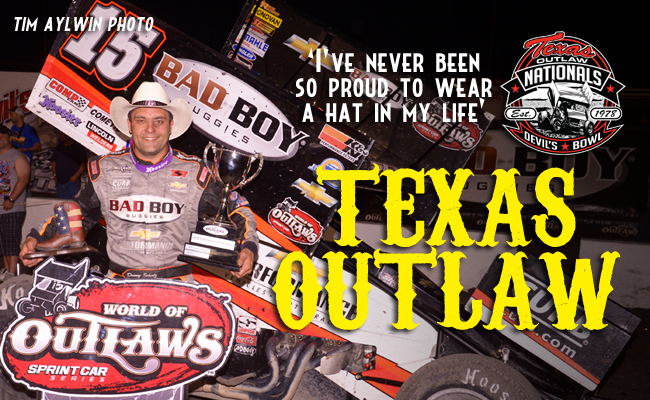 MESQUITE, Tex. – April 25, 2015 – The Texas Outlaw Nationals at Devil’s Bowl Speedway on Saturday night was a battle between two drivers and the lapped traffic that lay ahead. When the checkered flag fell on the $20,000-to-win, 30-lap feature, it was Donny Schatz who scored the coveted Ted Johnson Memorial trophy and his sixth World of Outlaws Sprint Car Series victory of the season.

Schatz led the field to the green flag. A red flag flew on the start catching up several cars including 294-time series winner Sammy Swindell. The field reset and returned to green.

Schatz led the first lap and maintained that position through the opening portion of the feature. The six-time champion caught lapped traffic on lap five and second place Shane Stewart began to catch. On lap seven, Stewart got his opportunity to take the lead.

“I knew he was a little better off the bottom of two than I was up top but I had to give it a shot,” Stewart said.

Stewart slid Schatz as the two drivers came off of turn two onto the back straight using the Kyle Hirst as a pick.

“You get to a lapped car, you try to do something to get around them,” Schatz said. “Shane capitalized on it. Sometimes the best place to be is running second when you hit those spots. He got by us.”

For the next eight laps, Stewart worked to build up a lead over Schatz. But as he worked his way through traffic, Schatz caught back up to the Larson Marks Racing driver. On lap 16, it was Schatz back in prime position to take back the lead. In a move reminiscent of Stewart’s pass for the lead several laps earlier, Schatz, on the bottom, slid Stewart as the drivers came off of turn two onto the back straight.

“You just can’t make any mistakes with him running behind you,” Stewart said of Schatz. “He lost the lead doing that and of course I did too.”

Farther back in the field, Logan Schuchart, who started third, held off challenges from Jason Sides for the position. Sides eventually found his way around Schuchart’s Shark Racing car on lap 19. The move was short lived though as Kraig Kinser battled his Mesilla Valley Transportation No. 11K car forward after falling back to fifth in the opening laps. Kinser got around Schuchart on lap 24 and then around Sides with four laps to go to take over the third position.

As the race wound down, Stewart tried to close the gap on Schatz’s No. 15 Bad Boy Buggies car for the lead.

“Anytime (Schatz is) out front he sets a pretty torrid pace,” Stewart said. “I was trying to stay with him just in case he got caught up in lapped traffic.”

Ultimately it was Schatz who donned the Outlaws cowboy hat and hoisted the Ted Johnson Memorial trophy in victory lane. He is just the second driver to have his name engraved on the award.

“It’s fun racing with Shane. He’s a class act. He races hard and he races clean and it’s fun to come out on the better end of him,” Schatz said. “Never been so proud to wear a hat in my life.”

Schatz said getting through traffic and anticipating the challenges from behind were the key for the night.

“Well you’ve got to expect it – you don’t know if he’s there or not,” Schatz said. “You’ve got to go as hard as you can and try not to make mistakes. And if you’ve got to move around, you move around. That we did. Getting through traffic – that’s what wins and loses these races. That’s what has lost me a lot of races and that’s what’s won me a lot too.”

It was the sixth win of the season for Schatz and his Tony Stewart/Curb-Agajanian Racing team. He currently leads the championship points standings by 26 over second place Stewart.

Stewart said he was disappointed with his finish but pleased with the way the 2015 season has gone so far for his team.

“I really, really wanted to win this race,” Stewart said. “I’ve got a lot of friends and family here. It was a race that I had on my radar that I really wanted to win. This Eneos/GoPro car has been really good all season and (crew members Scotty Martin and Andrew Seamans) once again gave me a good car. It’s always fun to be able to race for the lead, to be able to race up front like we’ve been able to do all year. Definitely a dream come true for me.”

Kinser, who finished third and in the process scored his first podium finish of the season, said the finish was one his team needed.

“We struggled a little bit the last month and a half,” Kinser said. “Just to get up here on the front stretch with these two guys is an accomplishment right now for us. Hopefully this will give us some momentum going into the rest of the year.”

The World of Outlaws Sprint Car Series returns to action next Friday night, May 1 at Salina (Okla.) Highbanks Speedway. That is the first of a three night stretch that also takes the Outlaws to Federated Auto Parts Raceway at I-55 in Pevely, Mo. for the Spring Classic on Saturday, May 2 and Tri-State Speedway in Haubstadt, Ind. on Sunday, May 3. Great tickets remain for all three events. Visit http://www.WoOSprint.com for more information.

RACE NOTES: Tonight’s win was the sixth of the season for Donny Schatz… Donny Schatz joins Daryn Pittman as the only other recipient of the Ted Johnson Memorial Award… Kraig Kinser scored his first podium finish of the season tonight at Devil’s Bowl… Brad Sweet was the night’s KSE Racing Hard Charger, advancing 10 positions to finish in 10th… Shane Stewart scored his third quick time award of the season. He is second in total awards to Kerry Madsen.