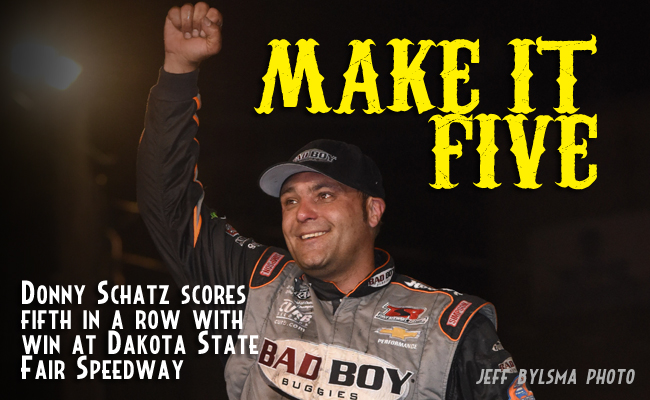 “I can’t say enough for this Bad Boy Buggies/Chevrolet Performance team,” said Schatz, who now has 16 wins in 2015 with his Tony Stewart/Curb-Agajanian Team. “The racecar they put under me every night is unbelievable. I’m sure there are probably better racecar drivers out there that could handle it but I’m the lucky guy that gets to drive it right now. Hats off to them, they just do a phenomenal job from the start of the night to the end. The longer the race goes, it just seems like it gets even better. They’re on their A game right now.”

The feature got underway shortly before 10 p.m. but was quickly red flagged as the No. 5 car of Dave Glennon ended up in the front stretch catch fence following a crash. The repairs to the fence took about an hour.

The green flag fell once again with Daryn Pittman leading his Kasey Kahne Racing teammate Brad Sweet to the start. On the first circuit Schatz raced around Sweet in turn three to take over the second position. By lap five, Pittman had caught the back of the field as Schatz was bearing down. As the two drivers came off of turn four, they split a lapped car, Pittman going high and Schatz low. Schatz took over the lead after the start/finish line. Pittman battled back and retook the lead before the two could complete lap six.

Just two laps later as they worked to complete lap nine, Schatz again used a lapped car to his advantage. As Pittman tried to pass the car, he got caught up and Schatz worked the high side around.

“He did everything he could we were just a little bit better in spots so I could move around the race track and run the top of three and four and we could run the bottom,” Schatz said. “The racetrack turned out to be really awesome tonight.”

Farther back, Shane Stewart was charging through the field after starting in seventh. By lap nine he had moved into the fourth position and began running down Sweet, then running third. Stewart took over the position on the next lap and set his sights on the leaders.

As the race wound down, he began battling Pittman in traffic for the position. Pittman, preferring the inside line, held Stewart off lap after lap as the two exited turn two. By lap 28, Stewart was right on Pittman’s tail tank, and drag raced Pittman down the front straight.

Schatz crossed the line first with Stewart in second and Pittman in third.

“I’m glad we were able to get by him and hit that lapped traffic,” Schatz said of his earlier battle with Pittman. “Lapped traffic was fun again. You move around the race track and guys are all over the place, you see them moving, so it’s what you look forward to, not always when you’re leading but you can put a little space between you and second.”

Tonight’s second place finish was the fourth straight podium finish for Stewart and his Eneos/Larson Marks Racing team. Stewart has spent much of the season running right around Schatz.

“It’s the same old song just a different verse,” Stewart said. “I keep saying it, but we need to be a little quicker. We’ve just got to keep doing what we’re doing and not worry so much about him. And keep doing what we’re doing and hopefully one of these days we can compete with him on a daily basis. We’re getting there, we’re working hard and that’s all you can do.”

Pittman said the night’s race was the first race in a while where he didn’t feel like his car was too free – quite the opposite in fact. He said tight race cars are not great for him.

“Just the way we’ve been running the last couple of weeks, we’ll take third,” Pittman said. “We’ve just been struggling and we’re not where we need to be but these guys just don’t give up. I’m not going to give up either. We’re just going to keep battling until we get the car where we need to be and get it where it consistently needs to be for one thing… We still have a lot of the season left to go, a lot of races and we’ll no doubt rebound and hopefully finish the year strong.”

The World of Outlaws Sprint Car Series returns to action on Wednesday at I-96 Speedway in Lake Odessa, Mich. as the series runs the postponed NAPA Auto Parts Rumble in Michigan. Great seats are still available. For more information on the event and to learn how to purchase tickets, visit http://woosprint.com/i-96-speedway.

RACE NOTES: Donny Schatz’ win tonight at Dakota State Fair Speedway was his 16th of the season and fifth straight… Joey Saldana scored his seventh quick time of the season tonight, making him the leading qualifier… Shane Stewart was the night’s KSE Racing Hard Charger, advancing five positions to finish in second… A crash on lap one sent Dave Glennon into the front stretch fence and caused a nearly hour long delay to repair the fence.