Schatz Takes Prelude to the Ironman 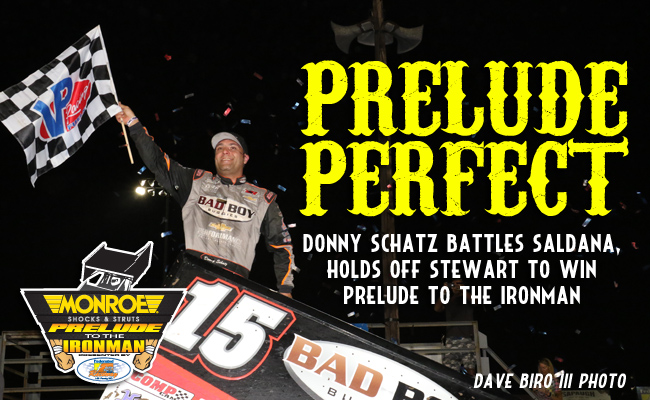 PEVELY, Mo. – Aug. 7, 2015 – Donny Schatz became the seventh different winner in the last seven World of Outlaws Sprint Car Series features at Federated Auto Parts Raceway at I-55 on Friday night after he battled past Joey Saldana and held off Shane Stewart to score his 22nd win of the season.

The win is Schatz’s second at the track and first since 2006.

“(My team) got to get back to the shop and get a few things sorted out,” Schatz said after a damaged racecar hampered his Tony Stewart/Curb-Agajanian Racing team in recent weeks. “We put a different racecar together and I got my feel back, so that’s good. I look forward to that. What a group of people (car owner) Tony Stewart has assembled.”

After scoring the quick time in qualifying earlier in the night, his third of the season, Schatz started the 35-lap feature in the sixth position. Though Jamie Veal started the feature on the pole, it was another Aussie, Kerry Madsen, who took over the lead on the first lap.

Madsen built a strong lead through the early going as Saldana was on the move. The driver of the No. 71M Motter Equipment car took over third on lap two and, after a short battle with Veal, sat in the second position by the time Madsen hit traffic on lap seven.

As Veal began to fade, Schatz, who was on the move, got around him on the top of turns three and four to take over third.

Meanwhile, Saldana had closed the gap with Madsen considerably as the two worked their way through traffic. Using that traffic as a pick, Saldana, fought his way around Madsen on lap nine for the lead.

With Saldana now charging, Schatz had his sights set on the lead. He tried to slide Madsen on lap 15 in turns one and two, but Madsen held him. The advances continued through the next lap, this time Schatz came out on top.

In short order, Schatz caught Saldana and the two began a several lap battle for the lead. With traffic in play and Schatz and Saldana working opposite ends of the track, Madsen, then in third had a new problem on his hands – Shane Stewart. Stewart, who started in seventh, was working his way to the front. By the time Schatz and Saldana were battling for the lead, Stewart picked off Madsen for third.

On lap 22 it looked like Schatz might finally have gotten Saldana. Side-by-side off of turn four, Saldana used a lap car to his advantage and held back Schatz. Then the thing Saldana did not need, happened – the caution flag flew.

After a yellow and brief red flag, Saldana chose the bottom line to restart. After a short battle, Schatz took over the lead. Saldana battled back on lap 24, but the move was short lived. With Schatz pulling away, Saldana next faced the No. 2 Larson Marks Racing/Eneos car of Stewart. The two battled for several laps, but ultimately it was Stewart to second.

Stewart closed on Schatz as the laps wound down, trying a slider with two to go, but he was unable to catch the No. 15 Bad Boy Buggies/Chevrolet Performance car.

Schatz has finished first or second in 19 consecutive full points Outlaws races and 21 of the last 22.

“When your bad night is second, that’s not too bad but we want to be up here winning,” Schatz said. “This isn’t a place that we’ve typically been all that great so to get a quick time here tonight was awesome – to get the win was even better.

“Double file restarts, you can win them that way and you can lose them that way. I had no choice but to try to carry speed, stay on the top and that was about the only chance I had of getting (Joey) because he was pretty decent on the bottom. It worked for us tonight.”

For Stewart, the second place finish to Schatz continues to be a familiar theme of his season.

“He’s tough to beat,” Stewart said of Schatz. “And I was going to try to make his line work and it just wasn’t there. When you get close behind someone here you get a little aero tight and the way the cushion was, really close to the fence, it was starting to get tight on me.”

“The good thing about our team is that we all get along, we all work hard and we’re obviously trying to achieve one thing and that’s to win races. You take away the 15 and we’ve had an exceptionally good year. Hats off to those guys and once again they’re the car to beat. Hopefully tomorrow night we will be one spot better.”

A frustrated Saldana said he would not have done anything different on the restart – he was just too free at the top of the track to hold off the advancing Schatz.

“Usually, I’m too tight on the top so we definitely got our car rolling really good at the beginning – I could run the top,” Saldana said. “The longer we ran and the fuel load got off, I was just too free to run at the top there. And then just didn’t have enough for them at the end.”

The World of Outlaws Sprint Car Series returns to action tomorrow night at Federated Auto Parts Raceway at I-55 for the Federated Auto Parts Ironman 55 presented by Walker. To find out more information and to learn how to buy tickets, visit http://woosprint.com/ironman-55.

RACE NOTES: Donny Schatz scored his 22nd win of the season tonight. It is his second career win at Federated Auto Parts Raceway at I-55 and first since 2006… Donny Schatz is the seventh different winner in the last seven World of Outlaws events at Federated Auto Parts Raceway at I-55… Logan Schuchart was the night’s KSE Racing Hard Charger advancing 13 positions to finish in seventh… Donny Schatz has finished first or second in 19 consecutive full points Outlaws races and 21 of the last 22.