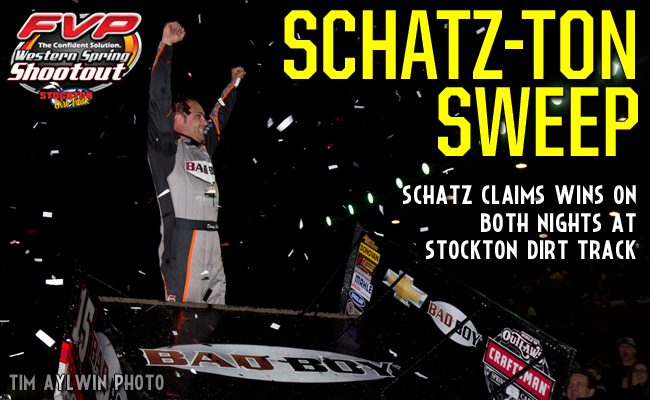 Schatz, who started the 30-lap feature in the sixth position, continued to rebound from the missed feature event exactly one week ago at Thunderbowl Raceway in Tulare, Calif.

“I wish this race team was standing [in victory lane], these guys are so incredible in what they do,” Schatz said. “These guys just keep working and digging and trying things.”

Schatz’s fourth win of the season did not come easy. The driver of the Bad Boy/Chevrolet Performance No. 15 qualified in the back half of the top 10 early in the night then finished second to Daryn Pittman in heat race two, which placed him in the dash for the second consecutive night.

Schatz struggled in the dash, as fast qualifier Joey Saldana started from the pole-position and dominated early, before handing the lead over to Pittman with two laps left. Pittman captured the dash victory and the first starting position for the feature.

Pittman, in the Great Clips/Sage Fruit No. 9, surrendered the top spot to Saldana, who powered around the leader on the outside exiting turn two on the opening lap.

Saldana, piloting the No. 83 Roth Enterprises/HR Livestock car, jumped out to an early lead following three quick cautions early in the race, including one for point’s leader Brad Sweet. Sweet was able to continue, but struggled the rest of the night to rebound, eventually resulting in his first finish outside the top five this season.

At the front of the field, Saldana, a native of Brownsburg, Ind., appeared to have the car to beat, as he maintained a two second lead on second place Pittman at the halfway point of the feature.

At this point, Schatz had managed to climb from his sixth starting position to third, just behind the leaders who started to encounter slower lapped traffic.

As Saldana and Pittman navigated the dense, slower traffic, Schatz managed to reel in both as a three car battle for the top position began to form.

Schatz muscled his way around Pittman for second with less than 10 laps remaining, which allowed Saldana to escape to almost a second lead as the two contenders jockeyed for position.

Saldana’s lead on Schatz was short lived, as the Fargo, N.D –native closed in on the leader quickly as they both continued to fight through traffic.

With five laps remaining, Schatz made his move around Saldana for the lead, dropping Saldana to second, before both Pittman and Elk Grove, Calif. driver and teammate Kyle Hirst made their way away him for podium finishes.

Schatz held off Pittman and dominated the remaining laps to capture his second consecutive $10,000 checkered flag at Stockton Dirt Track.

“The track was really tricky in the feature,” Schatz said. “There was a little moisture on the top but it was hard to get in on it and it slicked off a little bit.

“I didn’t know if I was going to be able to get them early in the race, I was having trouble getting going, but we got into traffic and it forced everyone to move around…it doesn’t matter who you race with, you just got to find a line they’re not in and that was really tricky tonight.”

Pittman, who finished 12th on Friday night, rebounded with a second place finish which was his first podium finish since the first night at The Dirt Track at Las Vegas almost three weeks ago.

“It was a decent run after how we ran last night,” Pittman said. “Second is always disappointing, but I knew with whoever hit that middle line just right was going to win the race.

“All-in-all we had a really good car, we were right there in the hunt even after Donny [Schatz] got the lead, we could hang right there with him. It was just a matter of who made the right moves at the right time in the race, but that’s what it comes down to a lot of times.”

Hirst charged from his eighth starting position to finish inside the top three, improving on his tenth place finish from the night before.

“I can’t thank my team enough,” Hirst said. “Dennis and Teresa Roth gave me a great car and the crew work their butts off.

“Congratulations to Donny [Schatz] and Daryn [Pittman], and awesome track work for the guys who got that done. I was excited to go racing tonight.”

RACE NOTES: Donny Schatz scored his series leading fourth win, breaking the tie with Brad Sweet who has three…Joey Saldana scored his second quick-time of the season…Brad Sweet finished outside of the top five for the first time this season.