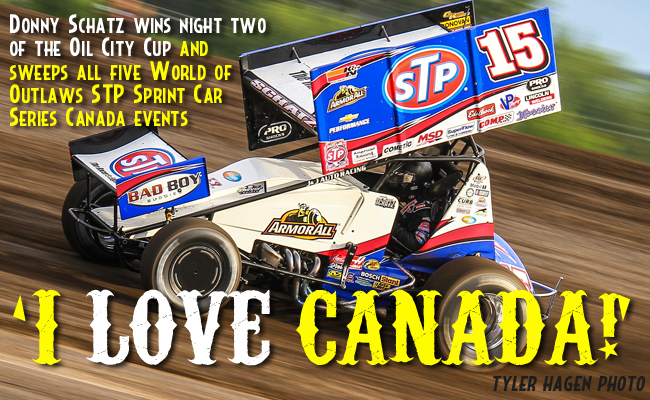 NISKU, ALBERTA – Aug. 23, 2014 – Saturday night, Donny Schatz did what no other World of Outlaws STP Sprint Car Series driver before him has ever done – with his win on the second night of the Oil City Cup at Castrol Raceway he became the first driver to sweep all five Canada events in a single season.

“I love Canada!” Schatz said. “We’ve always had great races when we’ve come up here and always enjoyed it.”

“(The Oil City Cup win is) not just for me, it’s for this whole STP race team. These guys are unbelievable and they definitely do their job to the best of their abilities. Hats off to them. Without their hard work and dedication and what they do, there’s no way I’d be standing here.”

Schatz, who started the feature in fifth, charged forward through a caution plagued first seven laps and battled polesitter Daryn Pittman for the lead.

“My racecar was really good,” said Schatz, who now has 17 wins on the season and a three-race win streak. “I had to move around and be in lanes that other people weren’t. It’s fun to be in that position. I was disappointed obviously that we saw the yellow come back out but that’s all part of racing. You deal with it. You have to find a way to overcome that and get yourself back up there. It was a fun race.”

In addition to the race victory, Schatz scored the Oil City Cup after winning on the first night of the event.

As Schatz continues to roll through the last part of the season, he finds himself leading the championship standings by 177 points. Incredibly, the last time the five-time champion finished a feature outside the top-three was on July 18 at Williams Grove Speedway. Schatz finished in ninth that night. His streak of podium finishes now extends to 14 in a row, including eight of the last 11 wins.

As the Outlaws head to the west coast next week, Schatz carries this momentum and the knowledge that the last time the series was at Skagit Speedway and Grays Harbor Raceway, he scored victories at both tracks.

Pittman and Steve Kinser led the field to the green flag on the 3/8-mile oval. That was short lived however as Cody Darrah wrecked coming out of turn two and ended up on his roof. Darrah was OK and went on later to finish the feature in 10th.

The field reset and as it went green again, Schatz took the opportunity to get around Kraig Kinser and Paul McMahan to take over the fourth position. One lap later, another caution fell after the 11EH of Marc Duperron spun in turn four. Another green flag was followed by another quick yellow after the 56 spun. It was bad luck for Schatz who had just powered past Brad Sweet and Steve Kinser to take over the second position.

The cautions were not over, but on the next run Schatz did have better luck, getting around Sweet and then battling Steve Kinser for the second position. At the same time Paul McMahan, who started the feature in third in his CJB Motorsports car but had fallen back through the early cautions, moved himself back to fourth after getting around Sweet.

The final caution of the night fell on lap seven. As the field again restarted, Pittman jumped to the lead. With Schatz in tow, Pittman went high, wobbled a bit coming off of two and gave Schatz the opportunity he needed.

“I wanted to choose the outside (starting position) from the beginning of the race to be honest with you,” Pittman said. “I really thought I could get a better start from the outside but I’d won every start, the Dash and up to that point in the A main – and still won that start with Donny. The problem was I just didn’t feel like I could get a run off of four to really enter one on the top like I needed to, so when I slid myself in one and two you know you’re opening the door for somebody to do something on the bottom and that’s exactly what happened.”

As the Outlaws hit lap 10, McMahan found his way around Steve Kinser, moving into the top-three. Farther back, Logan Schuchart drove his Shark Racing car from 14th up to seventh.

By midway, McMahan had caught Pittman as the two worked their way through lapped traffic. McMahan took over the second spot from Pittman, but the move was short lived.

“I got by Daryn and then I got caught up behind another lapped car,” McMahan said. “I kind of tried to slide him and it just scrubbed off so much speed and Daryn was able to get around me again.”

As the laps ticked off, Schuchart moved himself into the top-five and then began to reel in McMahan for the third position. Up front, as Schatz struggled to get around lapped traffic, Pittman closed the gap but ultimately came up short.

“I made a pretty big mistake with five or six to go off of two that killed my run,” Pittman said. “We were coming back to him.”

Schuchart gained on McMahan, getting around Sweet for the fourth position. Time ran out for the young driver though as he finished the night in fourth, his fifth top-five finish of the season.

Schatz scored his 17th win of the season and his third in a row.

“Definitely felt like we had a car good enough to win,” Pittman said. “Like I said, the track got slicker and harder and we got better and started coming back to (Schatz). Had a good run there (just struggled in lapped traffic) and let Donny check out too far and once he got that far, I’m surprised we were able to run him down like that. Just shows how good a car we had.”

McMahan who picked up his 35th top-five of the season said the lapped traffic was a particular struggle at Castrol.

“The racetrack was awful wide and it slowed down a bunch and then the lapped cars – they got going good… It started rolling around here really well and they were hard to get by.”

“They gave me a good racecar tonight – we just came up a little short.”

Schuchart scored the KSE Hard Charger Award for the night after starting the feature in 14th and advancing 10 positions. It is the second night in a row the Shark Racing Team has won the award – Schuchart’s teammate Jacob Allen won the Hard Charger Award on night one of the Oil City Cup.

The World of Outlaws STP Sprint Car Series returns to action on Fri., Aug. 29 at Skagit Speedway in Alger, Wash. for the first night of the two night Monster Showdown. The Outlaws then head south to Grays Harbor Raceway in Alger, Wash. on Sept. 1 before events in Oregon and California.

CASTROL RACEWAY NOTES: Donny Schatz scored his 17th win of the season… Night two of the Oil City Cup was the same race Schatz scored his 17th win in 2013… Schatz has not finished outside the top-three since July 18… Kerry Madsen got the quick time of the night – his sixth of the season… Logan Schuchart was the KSE Hard Charger of the night, advancing 10 positions to finish in fourth… Brad Sweet, Steve Kinser and Daryn Pittman all won their heat races.