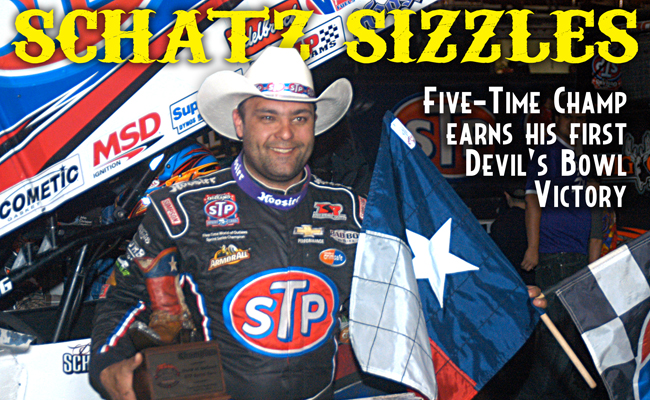 Paul McMahan made a last-lap effort to steal the win, settling instead for a second-place finish. Sammy Swindell, the driver with the most success in World of Outlaws STP Sprint Car Series competition at Devil’s Bowl, completed the podium. Joey Saldana was fourth while defending series champion Daryn Pittman earned the KSE Hard Charger award after starting 11th and rounding out the top five.

Heat race winners Wayne Johnson and Texan Sam Hafertepe Jr. led the field to the green flag in the 25-lap feature event. Johnson jumped out to a quick lead before the caution flew as Hafertepe’s right rear tire failed him.

On the restart Johnson, Schatz and Swindell went three-wide into turn one at the unique half-mile near Dallas. Johnson held on to the lead and charged out of turn two. Coming to the stripe on lap 9, Johnson had to navigate lap traffic. Schatz in the STP/Armor All #15 of Tony Stewart Racing pulled to the back of Johnson on the back stretch and darted to the bottom to drive around Johnson to take the lead. McMahan earned the second spot three laps later.

Johnson pulled off on lap 17 after rolling to a stop with a mechanical issue. Schatz led the field to the green with McMahan on the outside. The restart gave McMahan, behind the wheel of the Bair’s Tree Services # 51 CJB Motorsports entry another chance to steal the win. Schatz got a strong start, but McMahan dropped down following right on Schatz’s bumper. McMahan fell back while Schatz continued to power on.

In the closing laps McMahan had one more shot to make the pass and he was within striking distance on the final lap. Schatz went to the top of the track and McMahan charged to the bottom. As they exited it was still Schatz who went on for his third win this season, all on half-mile tracks.

The win marked Schatz’s 150th victory of his World of Outlaws STP Sprint Car Series career, three behind Mark Kinser for third all-time, and he did with former crew chief and mentor Kenny Woodruff in attendance as many of the original Outlaws have descended upon Devil’s Bowl for this special weekend event. Woodruff was crew chief on Jimmy Boyd’s car that won the inaugural World of Outlaws event in 1978 at the half-mile oval in Mesquite.

“To make it 150 at Devil’s Bowl, a place I’ve never won, it’s extra special,” said Schatz, of Fargo, N.D. “Kenny probably taught me some of the most important fundamentals there are in this sport. To this day I still use them every day. It’s an honor to have him here, it’s an honor to have raced with him and it’d be kind of cool if I could get my picture with him and (his wife) Annie tonight.

“The guys that did this back then, we’ve got easy lives compared to what they did. They had to work their tails off and things were a lot different, so hat’s off to them and it is an honor to have them here tonight.”

“They’re good, they’re the guys we’re all aiming to beat, the guy won 23 races last year,” said McMahan, of Nashville, Tenn. “To be that close, it definitely sucks, but at least we had a pretty good race car. To come here where the World of Outlaws all started, you know (series founder) Ted Johnson had a vision and it’s gone pretty well and I’m just lucky to be a part of it. Steve (Kinser) and Sammy (Swindell), they’ve been doing it a long, long time and hopefully I can do it as long as they do.”

Swindell, a 12-time winner in World of Outlaws STP Sprint Car Series competition at Devil’s Bowl and driver of the Big Game Tree Stands #1 took third from Jason Sides on a lap-17 restart to round out the podium.

“I just made a little mistake there when Paul pulled down in front of me and I didn’t expect him to do that and it kind of took the air off of the car and I slid across and hit the wall coming off of four,” said Swindell, of Germantown, Tenn. “I let a few guys get by and I had to work real hard to get through that. I don’t think we were exactly right, but we’re close. There are places we’re faster and a few places we’re not.”

The win pushes Schatz back into the World of Outlaws STP Sprint Car Series championship lead by only by a point over McMahan. Defending champion Pittman sits in third, six markers behind Schatz.

The World of Outlaws STP Sprint Car Series is back in action Saturday night to cap off the Texas Outlaw Nationals presented by American Racing Custom Wheels with a $20,000-to-win, $1,000-to-start main event. On-track activity is scheduled to begin at 6 p.m. with racing at 8 p.m.

DEVIL’S BOWL SPEEDWAY TRACK NOTES – Joey Saldana was the fastest qualifier around the high-banked, half-mile of Devil’s Bowl Speedway with a time of 14.035 seconds to earn five championship points. Also earning points were Paul McMahan (4 points), Cody Darrah (3), Sammy Swindell (2) and Daryn Pittman (1). Wayne Johnson, Donny Schatz, and Sam Hafertepe won heat races. … The dash draw was a 6 for the 6th time this year… Wayne Johnson won the dash for the first time this year…   The Original Outlaw Reunion, an autograph session with many of the original Outlaw drivers including Don Mack, Rick Ferkel, Rick Unger and Shane Carson and many more starts at 4 p.m. Saturday at the track.