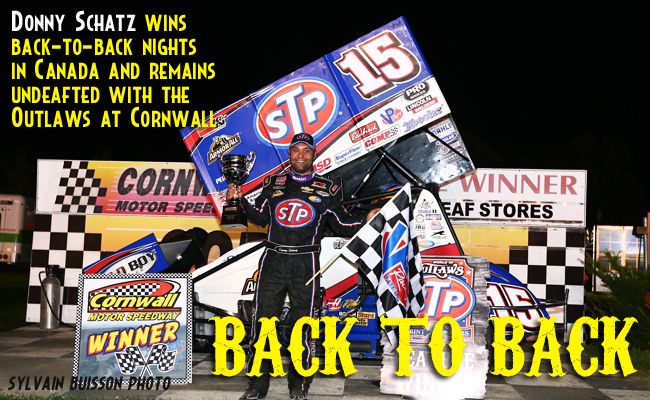 CORNWALL, Ont. — July 27, 2014 — Donny Schatz scored his second World of Outlaws STP Sprint Car Series win in as many nights Sunday after battling David Gravel and Kerry Madsen at Cornwall Motor Speedway. It was Schatz’s 11th win of 2014, tying him with Daryn Pittman for the most on the season.

Schatz, who won the Outlaws’ first and most recent appearance at the track in 2012, said Canada has been very good to him.

“[I] always look forward to coming,” Schatz said. “When we saw those rain clouds earlier in the day we were trying to get them to go away and obviously it worked. Can’t control Mother Nature, but she was obviously a race fan tonight. I hope you guys enjoyed it – it was great to be here tonight. The track was fun for me.”

The driver of the No. 15 STP/Armor All car complimented his team for the work they have been doing to get him to 11 wins.

“This team is really operating right now,” Schatz said. “They’re doing a phenomenal job. Everything they keep doing to these racecars is making big changes. Makes for a happy driver.”

Schatz extended his championship points lead again Sunday night. He now has an 83 point lead over Pittman. Third place Paul McMahan is 135 points out of the lead.

Kerry Madsen and David Gravel led the field to the green flag as Madsen jumped out to an early lead. Gravel got off track in the opening laps and slipped back to the fifth position. The first caution of the night flew on lap six.

As the green flag again flew, Schatz made his move, reeling in Madsen, as the Australia-native approached lapped traffic. After completing lap 10, Schatz slid Madsen and made it stick, taking over the lead on lap 11.

Shortly after, three cautions fell in quick succession. When the green flag again came out on lap 20, Schatz led Madsen, Paul McMahan, Kraig Kinser and David Gravel. In sixth, Logan Schuchart had advanced two positions from his eighth place starting position. By lap 30 Gravel was making a charge back after his earlier problem, moving into the third position, while Schuchart continued his advance forward to fourth.

The final caution of the night came out on lap 38 and set up a green, white, checkered finish. When the green flag dropped Schatz quickly built on his lead, with Madsen in second, and Gravel and Schuchart battling for third. Schuchart quickly slid Gravel and took over third.

Schatz took the checkered flag in first with Madsen second and Schuchart third.

Madsen’s second place finish was his second in as many nights in his American Racing Custom Wheels car. He led the first ten laps of Sunday’s feature.

“We’ll take second all night long,” Madsen said. “We want to win them but we got beat by a better car tonight. Anytime we can finish on the podium it’s a great result… It’s extremely tough competition so we’re definitely not disappointed. This is a great momentum builder for us and gives us a lot of confidence in the team for the rest of the year and the big races coming up.”

Schuchart got his third podium finish of the season at Cornwall in his Your Auto Source car – the first came at Thunderbowl Raceway, where he finished second, and the second came at the Dirt Track at Charlotte, where he finished third.

Schuchart, who took the KSE Hard Charger Award of the night after advancing five positions, said the caution flags late in the race helped him make up ground and make the passes he needed to score a podium finish.

“We got racing pretty good but everyone is pretty equal so it makes it kind of hard. It was a slick track – it made it racy, it made it fun to drive on,” Schuchart said. “I think the last couple yellows helped us to get a couple more cars.”

“Anytime you run good, you like it. All these tracks are new tracks to us, especially up here in Canada. But we’re having fun, we like it and we’re happy to be here.”

The World of Outlaws STP Sprint Car Series continues its swing through Canada at Ohswheken Speedway on Tuesday, July 29 for the Six Nations Showdown. The Outlaws then travel to Pevely, Mo. for the Prelude to the Ironman and the Ironman 55 at Federated Auto Parts Raceway at I-55 on August 1 and 2.