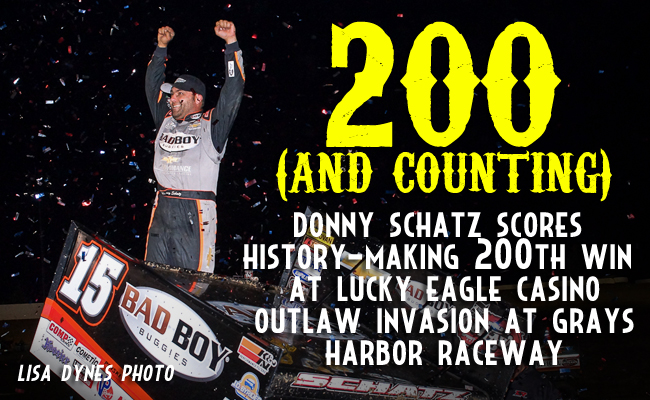 The reigning series champion now has 27 wins on the season, the most single-season wins of his career

“Unbelieveable,” Schatz said of his 200th win. “I’ve just been blessed being around great people my whole life. My family has supported me whole heartedly to this point and these guys I get to race with are awesome. Without their hard work, and all the guys who ever worked for me, there’s no way I would have ever got this far.”

Speaking of his Tony Stewart/Curb-Agajanian Racing team and more specifically crew members Ricky Warner, Steve Swenson and Eric Prutzman, Schatz said they have been together for so long they can read each other like a book.

“They do a great job,” Schatz said. “We have great marketing partners, Chevrolet Performance, Bad Boy Buggies, our car owner Tony Stewart – there are not too many people quite like that.”

In a season he will not soon forget, Schatz also exceeded his previous single-season win record by recording his 27th series win of the year. He holds a 422 point lead in the championship standings over second place Shane Stewart with 18 features remaining in 2015.

“I enjoy doing this, I love racing these cars, I love being able to race with the guys that I race with,” Schatz said. “These milestones have always been hard for me to get over.

“It would have been really cool for me to get this at Cottage Grove but I didn’t want to wait that long – that’s just the racer mentality. Glad to get it tonight, we’re going to enjoy it and maybe a little bit tomorrow. And then we’re going to go to Cottage Grove and try to win another one.”

Joey Saldana kicked off Monday night by making a little history of his own as he knocked down the 12-year-old track record set by Craig Dollansky. Saldana took home the quick time, his 15th of the season, and added his name to the record book after recording a lap of 11.750 seconds.

Paul McMahan and Brad Sweet led the field to the green flag. Sweet led through the first half of the feature and through two cautions. On a mid-race restart it was McMahan who jumped to the lead in his No. 51 CJB Motorsports/Nyce Crete & Landis car as Sweet slipped back.

It was that same mid-race restart that proved pivotal for Schatz as he battled from fourth to second in less than a lap. Two more cautions waved as a tire cut down on Sweet’s car and the 39C of Travis Rilat subsequently slowed on track. When the race got back underway, Shane Stewart, in third, gave chase and a heated battle for second ensued for several laps. At one point Stewart and Schatz almost made contact, but it was McMahan who was in Schatz’s sights.

On the final restart, McMahan jumped out early to a commanding lead, but traffic quickly came into play and Schatz closed.

“I wasn’t going to catch him without traffic, there’s no question,” Schatz said. “On that restart he took off and it was really kind of tricky. I couldn’t catch him – I was trying everything I could. We needed traffic obviously… (McMahan) got bottled up behind the 55 and I had to go where he wasn’t.”

McMahan said his car was too free to run on the bottom of the track and he opened a door for Schatz.

“Donny was able to get underneath me,” McMahan said. “I just caught the lap cars and there’s no place for them to go with the holes on the bottom and you’re hoping they’ll get out of the way but they’re racing just as hard as we are. I just got beat.”

McMahan finished the night in second with Stewart in third, Joey Saldana in fourth and David Gravel in fifth.

Stewart said his No. 2 Larson Marks Racing/GoPro/Eneos car was good the whole race, at one point catching Schatz who was running second, but it fell off a bit after the final restart.

“After that last restart I don’t know if it just got a little rougher or what but my pace slowed down a little bit,” Stewart said. “I actually thought Paul was checked out and then I saw him get bottled up down there in one and two and I’m like, oh man, I’ve still got a shot at this. They just got through lap traffic better than I did, plain and simple.”

On the front straight following the feature, McMahan and Stewart spoke of Schatz’s accomplishment and what this win means.

“Donny is awesome, that whole team is awesome,” McMahan said. “They’ve been together a long time and him getting his 200th win shows how good the guy is.”

Stewart complimented Schatz’s career and said the moment was special to be part of.

“Donny is doing a great job this year and he’s done a great job his whole career in sprint car racing,” Stewart said. “Just kind of cool to see and witness his 200th win.”

The World of Outlaws Sprint Car Series returns to action Wednesday night at Cottage Grove (Ore.) Speedway. To find out more information and to learn how to buy tickets, visit http://woosprint.com/cottage-grove-speedway.