Schatz Gets 15th Win of the Season at Nodak 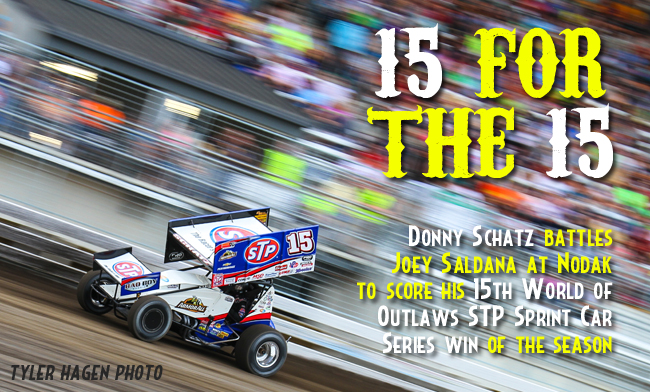 Schatz Captures His 15th Win of the Season at Nodak Speedway

MINOT, N.D. — Aug. 17, 2014 — Joey Saldana and Donny Schatz fought a pitched battle through much of the feature Sunday night at the Gerdau Magic City Showdown at Nodak Speedway presented by Schatz Crossroads Truckstop, but it was Schatz who came out on top, scoring his 15th World of Outlaws STP Sprint Car Series win of the season.

Schatz, a North Dakota native, said it meant a lot to him to get a win in front of a hometown crowd.

“It’s great. Nothing feels better than that,” Schatz said. “Thank you everybody here for 20 years of great support. What a race. These guys are unbelievable. Slick, sticky, cushion, no cushion, they got one hell of a racecar. It’s a pleasure to drive it. It’s fun to be here.”

Schatz started the feature in third and quickly took over the second spot after the green flag flew. For the next 25 laps Schatz adapted to a changing racetrack, attempting different lines and making more than one abortive attempt to get around Saldana.

“(Saldana) was on the top and he got underneath us and he seen us and he started moving down,” Schatz said. On lap 26, Schatz, who had been driving on the bottom of turns three and four moved to the top line. As the two drivers exited turn four, side-by-side, Schatz took the lead from Saldana and kept it through the remaining nine laps.

“You’ve just got to go where they’re not,” Schatz said. “Sometimes you’re at a disadvantage leading these races when the track starts to change. The rain definitely changed the racing surface. I didn’t expect it to be that quick. I thought it would blow off a lot quicker than it did. It stayed really good, you just had to get up and pound the cushion and do the best we could.”

Since July 18 – the first night of Summer Nationals at Williams Grove Speedway – Donny Schatz has finished no worse than third. After tonight’s win, the Tony Stewart Racing driver has 12 straight podium finishes. Schatz has won six of the last nine races.

Second place finisher Saldana started the feature in his Motter Equipment car on the pole. He led the first lap and through early restarts for cautions, held off Schatz. On lap 14, as Schatz and Saldana worked their way through lapped traffic, Schatz looked low in three and four, and got side-by-side with Saldana as the two hit the front stretch. Saldana held the position and the lead.

Schatz again challenged for the lead on lap 17 and lap 19. Finally, on lap 26, Schatz went high instead of going low and found his way around. Saldana said he was not expecting the move.

“He’s a great racecar driver and you make a mistake and he makes you pay,” Saldana said. “I saw him down there in lapped traffic running on the bottom and it was getting better down there but then it started cleaning off and the top got better. It was just the wrong place at the wrong time.”

Saldana said his Motter Equipment team has been struggling lately and that this second place finish gives them good momentum heading into Edmonton.

David Gravel, who drove his Roth Motorsports car to a third place finish, fell back to sixth at the start of the feature. He battled back throughout the 35 lap A main.

“The restarts definitely helped me,” Gravel said. “(Daryn Pittman) got by me on the start but starting sixth on one of those double file restarts I got up to fourth and then we had another restart and I got a good run off of four on (Paul McMahan) and passed him. It’s definitely great.”

“It’s been an up and down year. We’ve got some wins, but to get on the podium is good. Hopefully we can continue that on for this next swing.”

In the race for the championship, Schatz extended his points lead to 154 over second place Pittman. McMahan is in third, 199 points out of the lead. Saldana and Kerry Madsen have the same number of points, 8519, and wins, but Madsen has more top-five finishes, giving him the tie-breaker and the fourth position in the points.

Earlier in the night, McMahan broke the old Nodak Speedway track record held by Sammy Swindell since 2012 (13.217) with his qualifying quick time of 12.991.

The World of Outlaws STP Sprint Car Series returns to action on Aug. 22 and 23 at the Oil City Cup at Castrol Raceway in Edmonton, Alberta, Canada. The Outlaws then head west making stops in Washington, Oregon and California.

NODAK SPEEDWAY NOTES: Donny Schatz scored his 15th win of the season… Donny Schatz extended his points lead to 154 over Daryn Pittman… Paul McMahan got his ninth quick time of the season… Donny Schatz has 44 top-five finishes – 10 more than the nearest driver… Kerry Madsen and Joey Saldana are tied for fourth in the points with the tie-breaker going to Madsen… Trent Stengl was the KSE Hard Charger of the night, advancing seven positions to finish in 14th… Brad Sweet, Steve Kinser and David Gravel all won their heat races tonight.