Saldana Gets Slick Win at Charlotte 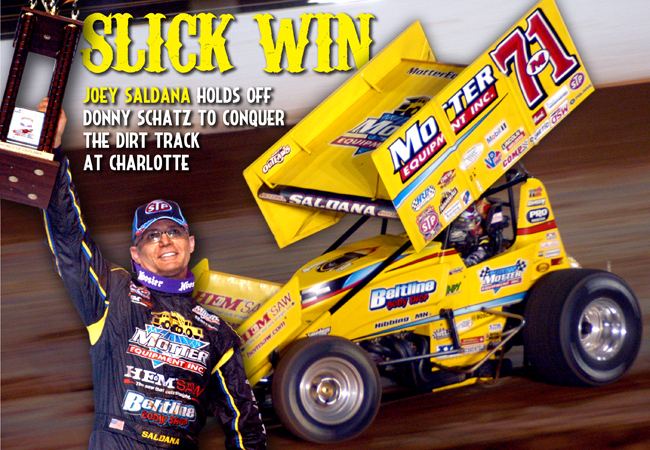 ‘Brownsburg Bullet’ holds off Schatz to earn his third World of Outlaws STP Sprint Car Series victory of the season, fourth of his career at Charlotte

CONCORD, N.C. — May 23, 2014 — The final results from Friday night show Joey Saldana leading every lap in his Motter Equipment car – what those results do not show is the nearly lap-by-lap battle Saldana fought with Donny Schatz to win the World of Outlaws STP Sprint Car Series Circle K/NOS Energy Drink Outlaw Showdown at The Dirt Track in Charlotte.

“To race Donny Schatz on a slick track,” Saldana said. “I think the only reason that saved me was turn one and two – the cushion is what saved me because [Schatz is] definitely everybody’s benchmark when it gets slick.”

Saldana and Schatz took the green flag from the front row with Logan Schuchart and Kraig Kinser in row two.

On lap one Schuchart jumped past Schatz on the high side through turn two and took over the second spot. The move was short lived though as Schatz fought back and retook the spot by lap four.

Schatz then set his sights on Saldana. By lap six, the five-time champion was challenging Saldana for the lead. Schatz got his opportunity on lap seven as the pair caught lapped traffic. Just as Schatz piloted his STP/Armor All car around Saldana, the yellow flag flew, giving the lead back to Saldana.

As the green flag again flew on lap eight, Shane Stewart caught a tire barrier on the inside of the track and had a scary wreck that saw him flip end-to-end. Stewart was unhurt. Also involved were Jason Sides and Brad Sweet. Both drivers were able to return to the track and finish the race.

Saldana and Schatz again caught lapped traffic in the closing laps, but Saldana, despite getting into the back of Sides, made sure not to make the same mistake twice and let Schatz around. This included an impressive pass down the middle of two lapped cars through turns three and four.

“I knew Donny was on me and you don’t want to run into anybody but I just knew I had to keep my pace going or he was going to drive right by,” said Saldana, of Brownsburg, Ind. “I don’t know, I think it’s just instinct and you can’t learn it, you just have to experience it and some guys are just really, really gifted and some guys aren’t, so you’ve got to work really hard at it.”

Saldana’s win snapped the four race win streak of Daryn Pittman. It had been the longest win streak in the series since Jason Meyers’ five race win streak in 2011. Saldana also closed Pittman’s lead in the championship standings to just one point. This was Saldana’s fourth win at The Dirt Track at Charlotte and his third on the season.

After a tough battle down the stretch, Schatz said second place was not the result he wanted for his team or team owner Tony Stewart, who was in attendance tonight.

“This whole team, these STP guys, I really wanted to get a win for them tonight,” said Schatz, a five-time series champion from Fargo, N.D. “We haven’t felt like we’ve been very good even though we’ve been in the top five but they keep digging – they keep putting a great racecar under me and keep making it better and that’s all you can really ask for. I get to have a little more fun the next couple of nights and race for fun – I’ve been looking forward to that, but it would have been nice to get a win tonight.”

Tonight’s third place finish gave Schuchart and his Shark Motorsports team their best ever Outlaws finish. After the early challenge to Schatz, Schuchart tried again to take over the second spot from Schatz in the closing laps with a slide job out of turn two. Schuchart was not able to make the move stick and Schatz retained the position.

“It might have been close and maybe I shouldn’t have done it but I’m trying and I just really want to win,” said Schuchart, of Hanover, Pa. “We had a good car. Our guys did a good job. I was just trying to find a different line that those guys weren’t using that hopefully if they got to racing each other I could catch up to them. I got one shot at it and I tried to take it. I want to win one of these races.”

Schuchart said he and his team knew coming into this season that they would be facing a learning curve but that with every race and new track they face, the team is making strides and improvements. He said, though he was happy to run third, he had hoped for a finish a couple of spots better.

Lawrenceburg Speedway in Lawrenceburg, Ind. will next host the World of Outlaws STP Sprint Cars on Monday, May 26. The Outlaws continue their swing through the Midwest with stops at Attica Raceway Park on May 30 and I-96 Speedway on May 31.

THE DIRT TRACK AT CHARLOTTE NOTES: For the Dash inversion, the number six was drawn for the 11th time this season… Daryn Pittman’s championship points lead has been reduced to just one point over tonight’s winner Joey Saldana… Donny Schatz won his eighth heat race of the season tonight.