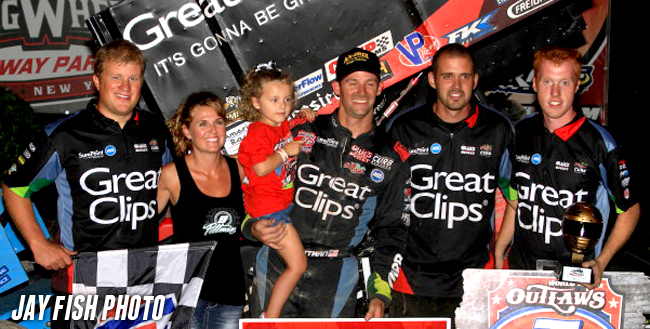 ELBRIDGE, N.Y. – July 23, 2013 – Daryn Pittman swept into the lead on a restart just one lap into Tuesday night’s World of Outlaws STP Sprint Car Series main event at Rolling Wheels Raceway Park and held off Donny Schatz on another restart three laps from the checkers to earn his eighth victory of the season.

Pittman, the championship points leader, was on the inside of row two for the start behind pole-sitter Chad Kemenah and Schatz when he slipped past Schatz and into second when two separate incidents brought out a caution with only one lap complete. On the ensuing double-file restart another caution waved, leaving Chad Kemenah to choose once again which lane would propel him back to the lead.

Kemenah tried the outside lane, but Pittman got a great jump and held his lead as they raced into turn one. Kemenah and Schatz jockeyed for the second spot before Schatz cleared Kemenah exiting turn two on lap nine but the caution flew again, allowing Kemenah to retain his position before he exited the track for an overheating motor that would end his night.

That meant Pittman in the Kasey Kahne Racing Great Clips car and Schatz in the Tony Stewart Racing STP/Armor All car – the top two in the championship battle – would square off in a bout for the victory. Pittman quickly jumped back into the lead and pulled away before Schatz moved back in, sliding right up on Pittman’s tail.

Schatz, who was trying to win his third consecutive race, was pressuring Pittman when a final caution waved with three to go for Glenn Styres’ slowing car on the front stretch. Now in a single-file restart on lap 27, Pittman quickly jumped back in front and cruised to victory lane.

“After the dash draw and starting fifth in the dash, I thought winning was going to be a tough chore, especially with the guys up front,” said Pittman, a native of Owasso, Okla., who increased his championship lead to 114 points with the win and a second-quick effort in qualifying. “The car was really good in the A and fun to drive. I felt like I could move around and run the top of one and two and that gave me a lot of confidence.”

Schatz settled for a runner-up finish, keeping his run of podium finishes going.

“We hot-lapped strong, and in qualifying we weren’t so good and it seemed like every time we hit the track we weren’t as good, and that’s the way it goes some nights,” said Schatz, of Fargo, N.D. “These STP guys are doing a great job and the only thing you can do is just keep rolling. We seem to run good in Canada so we’re looking forward to going there.”

Cody Darrah drove his way up to a third-place finish to grab a spot on the podium, giving Kasey Kahne Racing two cars in the top three.

“We got a good feel for our car in the dash and just had to make a few changes for the A,” said Darrah, of Red Lion, Pa. “We were pretty good in the feature, but we got held up in lap traffic, and on the final restart I thought we had a chance. On the restart it felt like the left rear was going down and with just a few laps to go we ran out of time.”

Kerry Madsen came back to finish sixth in the feature after an unlucky break in the dash, where after starting second the caution flew on the first lap as the pack ran into turn three and Madsen found himself without brakes. The car wedged itself under a guard rail damaging the suspension and body of the car, but leaving the chassis usable.

The series goes across the border for the next three races, beginning on Saturday night at Autodrome Drummond in Drummondville, Quebec, and continuing on Sunday at Cornwall (Ontario) Motor Speedway and Tuesday at Ohsweken (Ontario) Speedway. Those events set the stage for the $20,000 to win Federated Auto Parts Ironman 55 weekend Friday and Saturday (Aug. 2-3) at Federated Auto Parts Raceway at I-55.

NOTES – Joey Saldana was the fastest qualifier around the 5/8-mile oval with a time of 16.267 seconds to earn five championship points. Also earning points were Daryn Pittman (4 points), Chad Kemenah (3), Paul McMahan (2) and Kerry Madsen (1). … Joey Saldana, Kerry Madsen, and Craig Dollansky won heat races. … The dash draw was a 6 for the 27th time this year. … Chad Kemenah won the dash for the third time this year.